Garcia “Fucking” Hotspur was a surprising new character introduced this year. His macho attitude, use of Spanish swears, and his demon slaying ability made him stand out among this year’s new videogame characters.

I had a chance to interview the man behind the punk: Steve Blum. Keep on reading, pendejo! 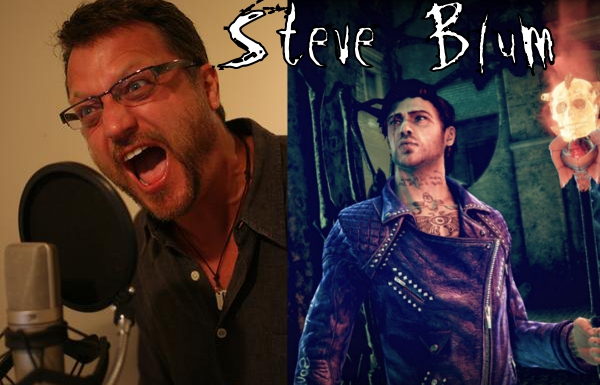 Garcia Hotspur is a tough as nails Mexican punk, how did you go about formulating his voice and attitude?

That was an interesting process. They had originally recorded him with a Spanish actor. I loved his accent – it made Garcia a bit more exotic. They told me they were leaning more toward a more Mexican attitude and speech pattern, so I sort of melded the two where I could. I’ve been ripped for the accent, but it was actually quite intentional. I felt it helped to sell the cocky swagger. Hmmm Cocky Swagger… good name for a band!

What were some of your favorite lines as Garcia?

Don’t remember any verbatim, but anything with cussing (English and Spanish) was pretty damned fun. Oh yeah, and the boner jokes never get old.

How much improv freedom where you given to come up with lines?

More than I expected! Growing up n L.A., I have a lot of friends from all over Latin America, so of course the first Spanish phrases I ever learned were creative ways to swear. I was happy to finally put them to use. Because I came in after most of the animation was complete, a big part of my job was to make the words fit into the mouth of the character. They encouraged me to change things up for the funny (and for context) and I loved the challenge of fitting it into the lip flaps.

What are the qualities of the character Garcia that you liked and disliked the most? Can you say that he actually have some similarities with your personality at all?

Ha ha! What’s not to like? I have to find something in common with every character I voice. As much of a hardass as Garcia is, he is also a very passionate dude. The passion is where I started with him. Whether it was love or violence, he invested himself fully. I may not be as violent, but I certainly am willing to put myself out there fully in other areas.

In reality, do you think you will actually become good friends with “Garcia Hotspur” if he was a real person?

I’d like to, but I think he’d be too busy constantly hunting demons! I’m sure we’d meet for a beer once in a while tho!

Do you have any funny stories while working on the recordings for Shadows of The Damned?

It was pretty funny watching the creative team have to seriously debate things like whether they wanted to call a drippy, exploding demon a puta or pendejo. Ya just don’t hear conversations like that in normal life.

Since you have also worked on a few voices in Killer 7, what was it like working on another Suda 51 game?

Wow, that was a while ago! Often I have no idea what company I’m working for or even what the game is called because everything is so top secret. I honestly can’t compare the two! This one, was a great experience. Honestly don’t remember where the hell I even was when working on Killer 7!

What sort of horror media do you enjoy? Whether books, films or games.

I’m not a gamer, but I appreciate good horror in all media. I used to work for the company that made ReAnimator, so I have a special love for the campy crazy too.

Who is your favorite character that you have voiced throughout your career?

Like casually mulling over which of your children to drop into a shark tank. Can’t choose one! Love them all for different reasons.

Are you a fan of the Big Boner, or the Hot Boner from the game?

Hmm… God thinks all Boners are beautiful, so I guess I do too.

Thanks to Steve for his time!