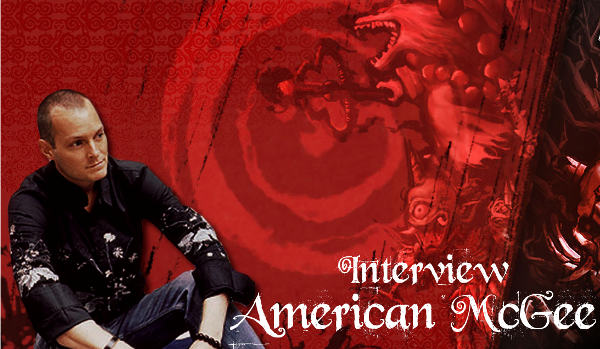 “American McGee”, a name of legends within this industry. This man gave birth to the Alice series, worked on several of Id Software’s classics and now runs his very own Indie studio from Shanghai  With his latest project on the way, I decided to approach the man for some information.

RoH: Can you tell us about your affinity for retelling classic, whimsical tales in interesting and dark ways?

“Actually, most of the tales I’ve worked with are pretty dark to start with. In some older versions of “Red Riding Hood,” for example, the wolf has rocks sewn into his belly and is then thrown into a deep river as punishment for attempting to eat Red and Granny. Even the Alice stories contain deep veins of dark material that most people ignore because they’ve only ever seen the Disney movie. My personal interest in these tales comes mainly from the fact that my own personal narrative style aligns nicely with the tone and presentation contained within them. It’s said that our personal narrative (or art) style is established when we’re young – and is often influenced by life between the ages of 6 and 12. For me, that was a time filled with diverse and often dark happenings. So this mode of storytelling just feels natural. ”

RoH: How do you feel about the reception of Madness Returns and can you divulge any information on the third title (conceptually or status of the project)?

“The fans seemed to love it, so that’s the most critical thing. My own wish is that we’d had a chance to trim it down a bit – I felt it was bloated and sluggish; a result of us creating too much content and not having time to edit for size and pace once we reached the end of our schedule and budget. A third title would be entirely reliant on EA’s approval and funding, since they own the Alice IP. If they ever decided to get behind it, I’d be happy to participate in the development. We certainly have a lot of ideas on how the narrative could be continued. As has been mentioned in other interviews, my wish is to explore a concept called “Alice in Otherlands,” which would find Alice jumping in and out of other people’s minds, exploring their “Wonderlands.” For me, this is the logical progression of Alice as a sort of super hero. ” 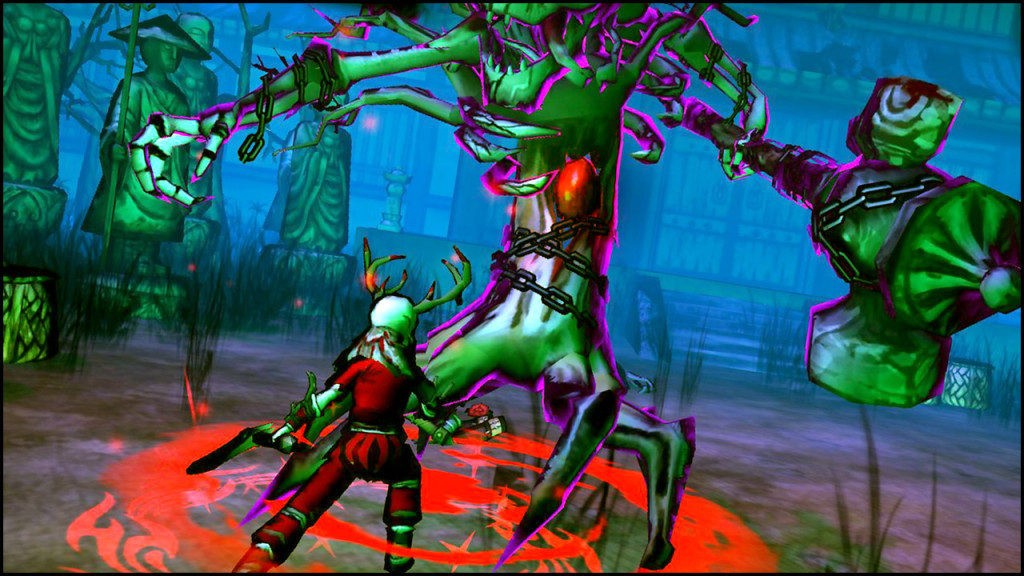 RoH: Spicy Horse appears to be a unique developer as it is entirely based in Shanghai, being one of the largest western developers in China. How does it differ from past development studios that you have worked with?

“The difference isn’t that great, at least not when it comes to the core of what we’re doing – making games. No matter where in the world you build a development studio, you likely rely on similar methods of production management and are using similar development tools. Where our studio is different (from most I’ve worked closely with in the past), is in terms of culture. We place high value on quality of life for our employees – my thought being that awesome work only comes from people who have time to rest their brains and bodies, explore the world around them and engage in a satisfying life outside of work. To achieve that goal we rely on production process to avoid crunch and overtime. ”

RoH: Both Akaneiro and a chapter from Alice: Madness Returns use Japanese art-styles. What prompted adopting this type of art style and can we expect to see it in future projects?

“The inspiration for Asian content to appear in Alice: Madness Return came first. I’d been scouring Victorian news from London, reading the stories to understand the type of world Alice would have lived in. We had a rule during development of A:MR that Alice could only imagine things based on something she would have heard, seen or read. China and Japan were often in the headlines back in those days, with royal families getting married in Japan and British explorers making their fortunes in China. That provided a foundation for us to build an Asian inspired landscape in Alice’s mind. And that development experience gave us the confidence to tackle an entire which utilized that style.

Akaneiro is special in many ways – it brings together the aforementioned development experience and a narrative perfectly suited to the style. It’s not likely we’ll build another game like it for a while, but we do have plans to continue expanding on this story and setting into the foreseeable future. ” 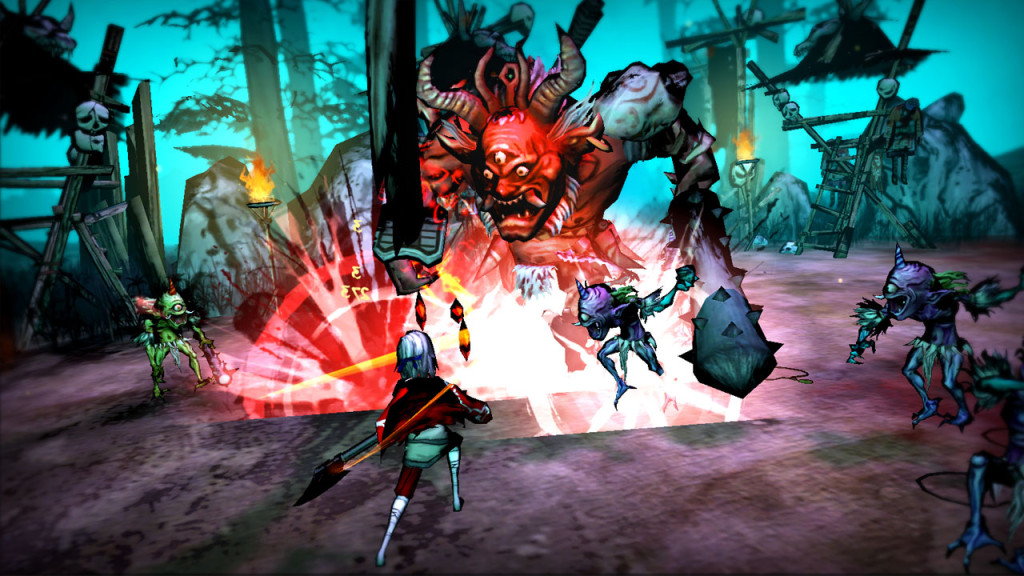 “The development team on A:MR consisted of 75 people internal to Spicy Horse with another 60+ producing 3D assets at outsourcing shops around Shanghai. It took a full two years to develop and once shipped was out of our control (meaning we weren’t able to update or patch it, since that responsibility shifted to EA).

On Akaneiro, our entire studio (including cleaning ladies and receptionist) is less than 50 people. That team has been working on three games since the start of 2011, including Akaneiro – with about 15 of them dedicated to Akaneiro almost exclusively as the project neared completion. Unlike Alice, we handled every aspect of art production internally, without relying on external art producers.

Those are the big, structural differences, but there are also a ton of minor differences – too many to list. The critical ones include things like development without the oversight of a publisher – which means a lot more freedom to develop as we like (and make mistakes that are entirely our own!). We also ran a much more organic development – whereas with Alice the milestones and schedule were locked in stone from the moment the development deal was signed. That resulted in a lot of painful, even nonsensical decisions – often forcing us to choose “stay on schedule/budget” over “do what’s best for the game.”

Interestingly, Akaneiro will deliver at launch a similar amount of game play length as Alice: MR, but was developed for around 1/10th the total budget and with a team around 1/10th the size! There’s a lot to be said for fast, agile development by a highly capable team who are comfortable working together. ”

RoH: In what ways will Akaneiro: Demon Hunters stand out when compared to other hack&slash games?

“From a technical/platform standpoint, it’s going to stand out from most games in general! Once we deliver the Android/iOS tablet versions, people will be able to play cross-device and cross-platform, using the same account to access their characters from any PC/Mac (browser or client) or tablet device. Beyond that, we’ve taken a sampling of elements from all the best-in-class examples of ARPG’s on the market today – and blended them together with a unique setting and narrative.”

RoH: Will Akaneiro see more content in the form of DLC in the future or are you going to switch to your next project after finishing Eye of Spite and The Yasha War?

“We’ll continue to produce new content and support the game for as long as the audience demands it. This is one of the things we really love about self-publishing online and to mobile; we’re provided a chance to build a stronger and longer lasting relationship with the people who are enjoying the game. We’re running a Kickstarter campaign right now to accelerate the delivery of some things, like tablet or Linux versions, but support for the title will continue whether or not we achieve our Kickstarter goal. We invite everyone to check out some of the things a successful campaign will help us deliver more quickly: 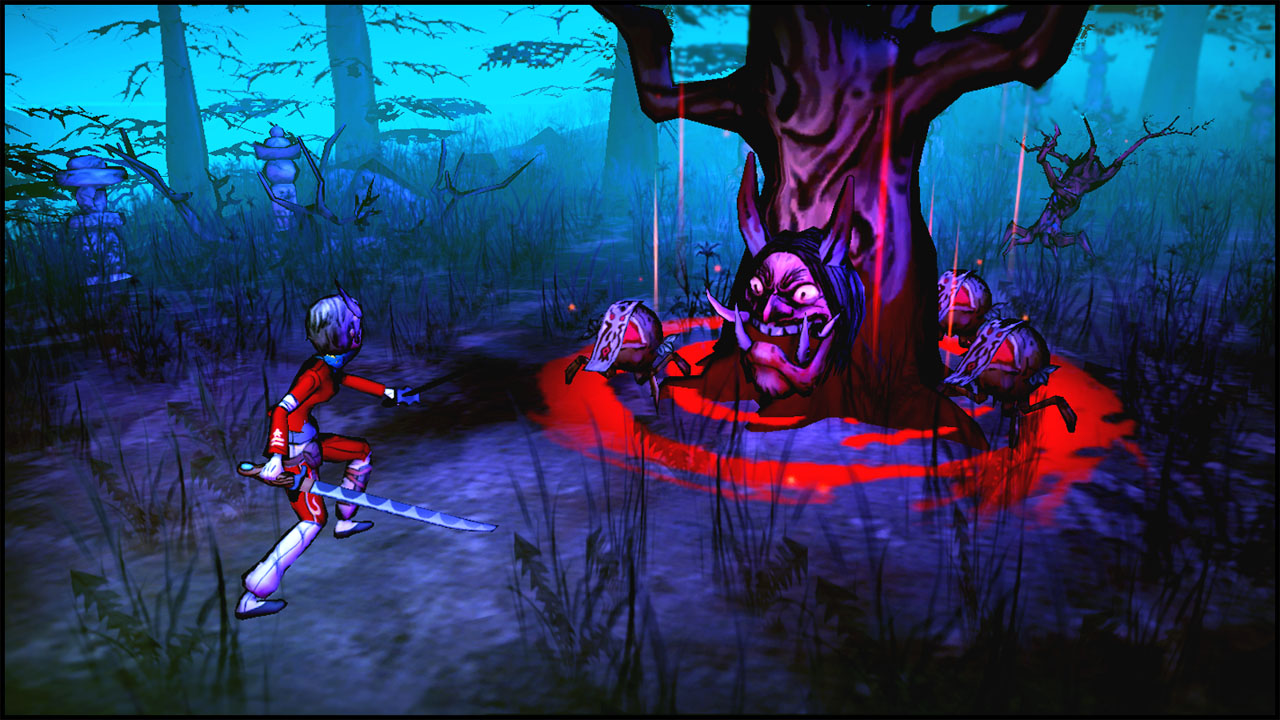 RoH: Based on the title’s reception, could we possibly see Akaneiro on consoles?

“I’ve maintained communication with both Microsoft and Sony since we finished work on A:MR, but the conversations are moving about as fast as chilled molasses. There does seem to be a lot of interest from the audience, but until MS and Sony streamline their approach to publishing indie, F2P titles, I’m not going to hold my breath.”

RoH: Our website is dedicated entirely to the horror-genre, so could you tell us how the game will appeal to our readers?

“The reference material we worked with from Japanese folklore is filled with some of the more disturbing imagery I’ve ever seen. The sheer number of demons and evil spirits contained within these records is frightening. And we’ve worked hard to cram as much of that horror into the game as possible. It’s a dark tale – not just because of all the demons invading earth and trying to kill or enslave us all, but also because of the non-fiction background upon which all of this is based. The game is set in Japan during a time when Western cattlemen were exterminated a huge swath of flora and fauna on these northern Japanese islands. The amount of real-world bloodshed and eventual extermination of all the wolves of Japan is about as frightening thing as one could care to imagine – and it is, unfortunately, all true.”