Inside the Indie Studio, with Digital Happiness 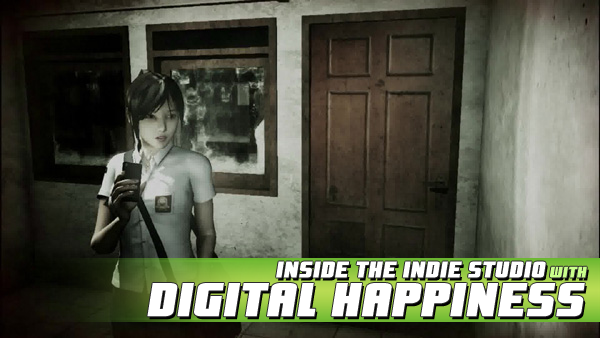 While the horror genre may no longer be a thriving one when it comes to AAA development, the indie scene the world over has embraced it. In Inside the Indie Studio, I will be reaching out to and speaking with various indie game developers about their survival horror game projects. Asking them what it is that drives them towards the genre, and what their hopes, aspirations, and goals for their games are. In the very first instalment, I had the pleasure of talking to Rachmad Imron, producer on the highly anticipated Indonesian horror game DreadOut. DreadOut has been drawing a lot of interest from fans of classic survival horror games ever since it was first revealed, and the positive impressions soared with the release of the demo. It’s a paranormal romp through Indonesian folklore that tips it’s hat to the survival horror greats of old, and your camera is your only line of defence from spiritual entities.

First off, could you give a bit of history on how Digital Happiness came together to work on DreadOut? It would be very interesting to hear how this project came about.

Well, it started 10 years ago. Seriously! We love video games and always dreamed about making games. Back then there were no affordable game engines, so we created our own engine similar to the Quake engine. We failed so hard. The engine was a mess, the project was canned, and we were rejected by our publisher. I personally left the company, and built a 3D animation and graphic design company as a consultant. It was called Iris (this is why Linda’s smartphone in DreadOut is called Irisphone). In 2004, I got a contract from the local government to make 3D simulation for a car, and even the payment was not great, but hey we made a game! That’s what we’re really passionate about, so we called our previous team together again, revived the engine, and implemented it on the project. We wanted to continue making a living as game developers, but I think our ecosystem was still not ready yet, we failed again! So we went back doing 3D animation for a living. In 2011, I met with our DreadOut game Director Vadi (previously he was our 3D animator),and he introduce us to the Unity engine. He showed us a glimpse of his game called “Jurig Escape“, this was a slap to our face, we had almost forgot our dream to create a game! So we decided to made it happen, we split our team in two, securing our cash flow and also for development, and so digital happiness and DreadOut was formed!

Most western gamers are not familiar with the game development industry in Indonesia, could you tell us about what the development scene is like there?

Our game industry is still in a early development stage. For a few years back even until now most developers in Indonesia were focusing on producing mobile and advert games. We can say that they have a certain degree of success, and now some big publishers are already investing and opening new development branch offices in Indonesia. We certainly hope it’s for the better of our video game industry. We have a handful of good human resources but mostly gone abroad because there’s no game industry in Indonesia, but we hope it will change soon. The survival horror genre for the most part has been taken over by more action oriented titles like Resident Evil 6 for a number of years now. From DreadOut’s inception, was the plan to always make it a pure survival horror game? Was there any pressure to make it have an focus on action at all?

Absolutely. Pure survival horror is our main goal, or at least we try to make closer to what older horror games was like. There is however, some action elements we can’t avoid. We didn’t think of it as pressure though, it’s more like a necessity, we build our games by our experience playing horror games and we do our utmost to make DreadOut a true survival horror game experience.

Many people have compared the gameplay mechanics of DreadOut with Tecmo’s Fatal Frame series. Was Fatal Frame an inspiration for DreadOut at all? Furthermore, where there any other films/games/movies that directly influenced DreadOut’s development?

Yes the ‘ghost photography’ style is solely our main inspiration for game mechanics. However we do something different with that, and we aim to bring it to a fairly new crowd as there are not any game with similar mechanics available for PC gamers.

I can’t say there’s any ‘direct’ movies or games that influenced us for DreadOut, but we love ourselves some great local horror movies like ‘Pengabdi Setan‘ ‘Bayi Ajaib‘ and late Suzanna’s (Indonesia’s legendary horror artist) movies. Of course the modern day holy trinity of Japanese horror ‘Ringu‘, ‘Juon‘, and ‘Dark Water‘.

DreadOut has been gaining a lot of notoriety over time, especially with the successful indiegogo campaign and the game being Greenlit on Steam. Have these successes helped motivate the team to keep working hard and get the game out to fans?

Yes absolutely, we would be nearly hopeless if both the indiegogo and Steam Greenlight campaigns failed! It was really a humble experience for us to get support by our community and mostly backers from our indiegogo campaign. Since behind most of gaming crowdfunding success is determined by an influential figure or someone with a past good memorable gaming portfolio. Us however? Well we’re practically nobody! So we were really grateful when we reached our goal both on indiegogo and also Steam Greenlight. You released a demo for DreadOut not too long ago. What has the experience been like getting feedback from the community? Has any of the feedback helped with development?

It’s a whole new experience for us. We are not used to receiving such a great amount of input for what we’ve worked on. Some of the feedback has been relevant for our project development, but for the most part they’re not haha! But it’s truly a new and exciting experience for us and we are greatly thankful for any input and support from DreadOut community.

What is it you feel truly sets dreadOut apart from many other Indie horror games?

We’d like to say that we’re not trying to revolutionized anything or create something ‘new’ or ‘different’ from any existing video games. DreadOut is simply our effort to bring our past experience with horror games and share it with today’s video game crowd. If there’s any difference with other games maybe in it’s unfamiliarity, we take on a whole new ‘Indonesian cultural-reference’ never before seen in any major video game release.

What is Digital Happiness’s ultimate goal with DreadOut, and what do you hope survival horror fans take away  from their experience with game when they finish playing it?

With DreadOut we hope we can learn and gain lot of things. Our goal to create more goals, and hopefully create many new IPs. We hope we can continue making a living as game developers through it. Finally though, we hope we can scare our fans shitless because that’s what they want! Hopefully they’re brave enough to finish our game. 🙂 Many thanks to Rachmad for doing this interview, we’re all really excited for DreadOut here at RelyOnHorror and we’re wishing Digital Happiness all the best! If you want to learn more about DreadOut, be sure to check out the Facebook, Twitter, Steam Greenlight, and of course the official website. Also check out the demo mentioned earlier here.