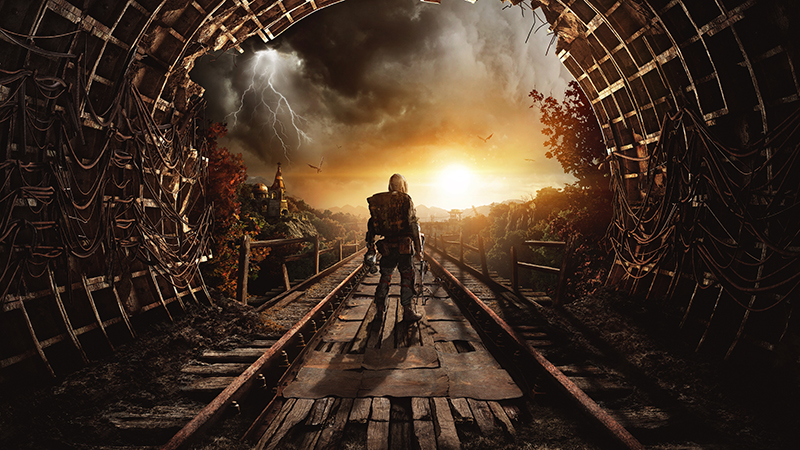 At PAX West this month, I got the opportunity to sit down and have an extended look at 4A Games’ Metro Exodus. Being the third game in a game series based on a book series, Exodus has garnered attention for being the biggest entry yet by appearing onstage at E3 2017 and boasting mainstream mechanics like crafting and larger environments. And from the vertical slice I got to experience that takes place fairly early on in the game’s campaign… I think it’ll turn out alright.

I was informed the sample I was playing was the same build used at Gamescom, and elements of it can be seen in this trailer. Playing on a dev Xbox One X, the game ran at an expected 30 FPS with some dips here and there. A stable 4K at 30 FPS on Microsoft’s console was stated to be their intended goal. While still being pretty, graphical purists (myself included) will want to pursue playing this game on an high end PC. Moving away (for the most part) from the confined sewers that past games had, the landscape is a desolate but detailed one where humanity has all but abandoned traditional buildings and just use them as outposts to capture unwitting explorers. Everything looks grimy to the touch, but also has its own share of beauty with nature reclaiming the landscape. 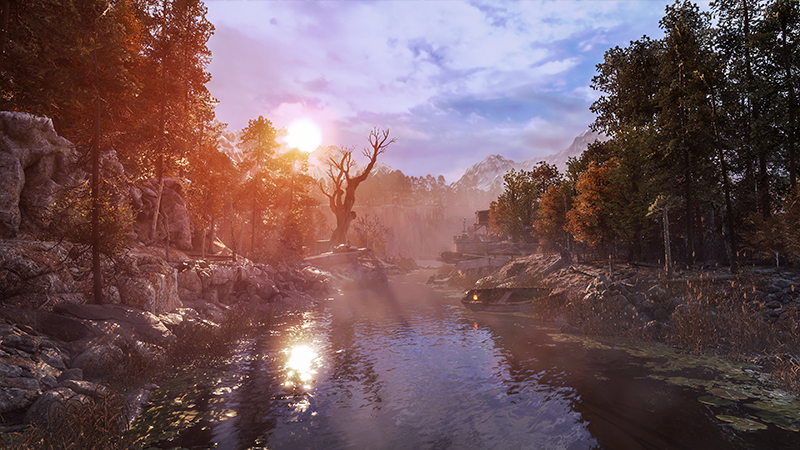 The demo has our protagonist washed up in the middle of a hostile territory, being rescued from drowning by a native to the area who quickly vanishes as soon as she appears. Although there will be many factions in the final game, I mostly dealt with a rustic group of infighting tribal thugs, along with mutant dogs that will attack you in packs, and a gigantic bear that would serve as a boss. The playground given to me was fairly large; in my hour with the game, I only navigated about 1/8th of the current map provided. I didn’t have to concern myself with the series’ famous (or infamous) air filter system for the entirety of the area I explored, although I did notice items for it existed within my inventory.

To briefly describe how my experience went: After walking through an abandoned town by the water where I was ambushed by some less-than-welcoming locals, snuck my way through a hostile fort, and then navigated a spooky graveyard before fighting the grizzly boss. While I could tread off the beaten path, the game did an alright job of bee-lining me through its intended events, often by high up ziplines that would separate each area. One can use shortcuts throughout the map, for instance, I snuck into the back of the fortress by boat which ended up being much easier than attempting to waltz through the heavily guarded (and explosive-ridden) front entrance.

Said demo represented a good amount of the content to be found in the full game, including a day/night cycle that affected your visibility, crafting that could be done on the fly or at a workbench, the scavenging for limited resources, and most importantly: The flow of combat. 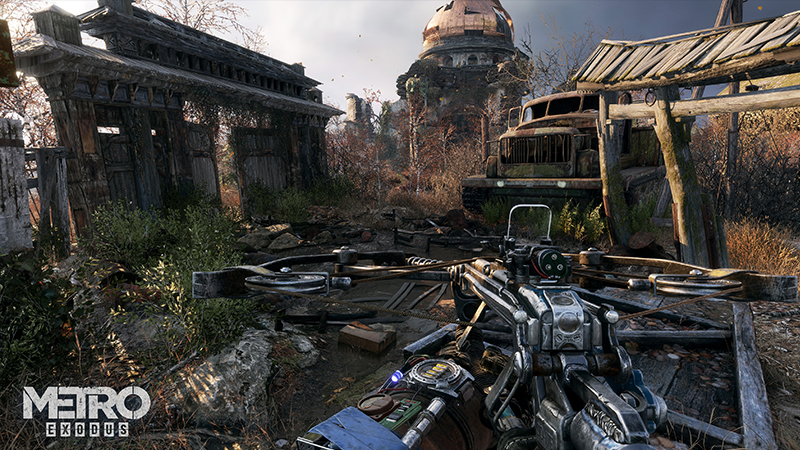 Ammo was always scarce in Metro, and Exodus is no difference. The first two basic guns I was armed with immediately ran out of ammo, leaving me with a trusty bowgun that, while only being able to fire a single shot at a time, delivered silent and nearly always one-hit kills. Bolts could also be recovered akin to knives in Metro 2033 meaning I always had some kind of projectile at my disposal. There didn’t seem to be a small limit on this resource either as by the end of my time with the demo, I had over 15 unused bolts since I was just committing murder with the same one over and over. Besides scraps to craft with and the errant bullet, enemies often dropped different short term weapon replacements with little ammo or upgraded parts. It seemed to be slightly randomized as when I died once, the same enemy had slightly different resources (or depending on how many they individually would use up).

The expanded scale of the map made the game function a little different after firefights, in which it’s more akin to Fallout where you’re running back to bodies you picked off earlier for supplies instead of fresh corpses being relatively close like they were in the other Metro games. It’s a little bit of busy work, but fitting for the stakes at hand.

Stealth is a heavy part of Exodus, and the game cleverly alerts you to being spotted either by both the lights worn by a suspicious enemy glowing brighter in your direction, and your wrist accessory informing you of their caution level. Standard tricks like throwing debris and one hit stealth knock out/kills will exist to help you clear out entire encampments without firing a shot. (It was much easier than going through an impromptu firefight as well.) I was informed that killing enemies affected a karma/morality system in the long run, but for the sake of the demo, permanently silencing hostiles was easier. The enemies also have tools to work against you as well as I regularly walked over their sound traps that immediately alerted them to check out my location. 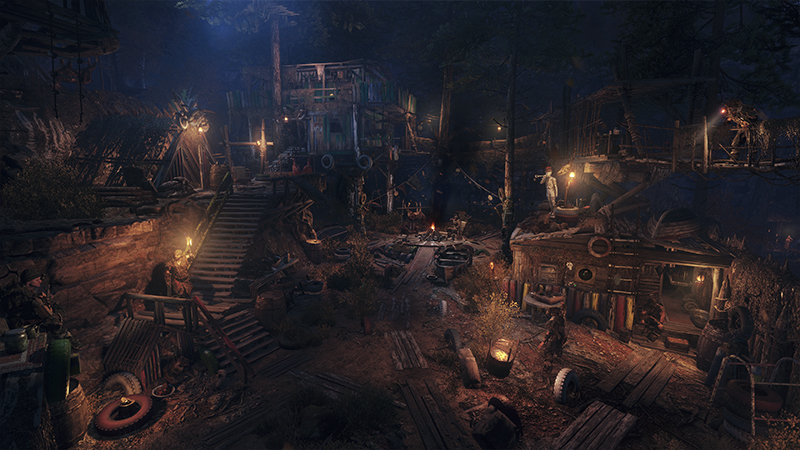 Enemy chatter is abundant and almost unintentionally comical as the territorial tribes you faces won’t ever shut up, constantly nattering on about their woe. While it helps in both giving you the location of enemies and expands upon the worldbuilding, it made practically everyone encountered (in this demo) come off as bumbling idiots. Their AI wasn’t necessarily the best either as they would do things like trying to route you… only to have 3 or 4 of them loudly run behind you in a straight line. While death came easily, once I got a good feel for their sightlines and habits, navigating around them was always easier on the second attempt.

Being a dev build, my time with Exodus was no stranger to random bugs. A few freezes, one of which lasted five seconds, certainly put my PR guy on edge for a few moments. When trying to stealth kill one guard, another one nearby slid 10 feet across the floor.  At two points, corpses went flying below the terrain. Being six months out from the retail release though, I didn’t see any need for concern for what would ultimately be the final product. Both releases of the original Metro 2033 were buggy as well and with the Triple-A backing Exodus is promised, it’ll fare a little better.

One of my biggest gripes (that I don’t have a screengrab for) was that the prompts onscreen were a shade of gray that very often made it hard to pick apart from the already muted environment. Since Metro is a franchise that boasts itself on a minimalistic HUD, it doesn’t help that the moments it does come up blend so easily with the background. While it’s obviously an aesthetic choice, what I would’ve preferred added is the ability to change your HUD color like one would in modern Fallout games (and it would even be thematically appropriate). Until it was pointed out to me, I completely missed Night Vision goggles because they blended in too much with the background.

While treading slightly closer to other first person shooters with less-personality, Metro Exodus still stands out enough as both a fresh experience and a successor to the hardcore franchise that birthed it. There wasn’t anything that really blew me away outside of the shift in setting, but I can see myself having some fun early next year with this entry. What will really matter is if it has enough personality in 2019 to stand out from every other post-apocalyptic setting that has been popularized since Metro 2033 came out eight years ago. Metro Exodus comes out February 22, 2019 on the Xbox One, Playstation 4, and PC. 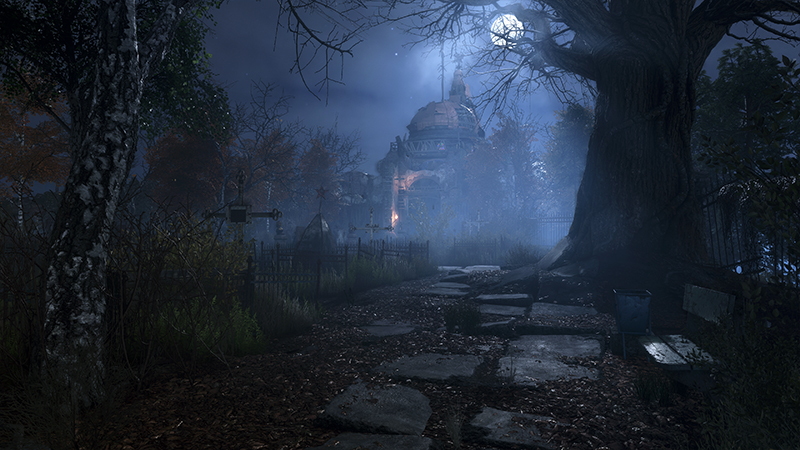