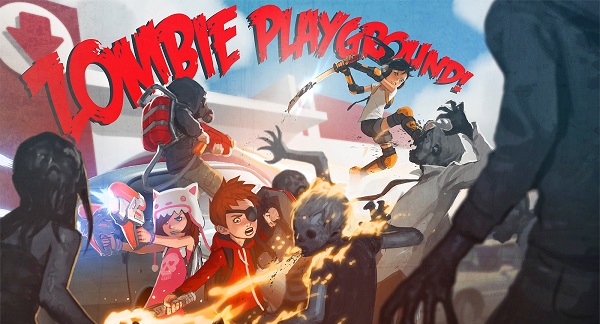 Some of you might be like me and enjoy your fair share of grim and serious zombie fiction, where there’s some gritty drama between rival human groups, loads of extreme violence, and lots of gore. But other times you might want to look at some bright colors and feel a bit more upbeat, right. Cartoons were fun, remember? There’s no reason for us to be so mature all the time! And zombie fiction can do with a little levity now and then. Enter Zombie Playground, a whimsical little Steam title where kids battle zombies. That’s the premise – and it’s a simple yet effective one.

Based on art by game industry veteran Jason Chan, developer Stealth Studios went to Kickstarter in May of 2012 with the intent of funding an action game with RPG elements, featuring kids as the playable heroes against zombies. It arrived on Steam Early Access late last month launching with an impressive visual style and animations. I didn’t know about the game prior to this summer, but it intrigued me enough to check it out. 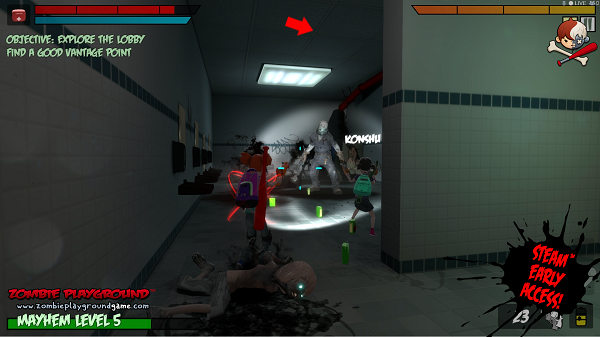 The first thing you’ll notice about the whole Kickstarter project and Zombie Playground itself is a top-notch art direction. The game sports a stylized cartoon aesthetic the likes of popular children’s cartoons. At first I thought it was a licensed project, but I was wrong. It all looks very polished, but the game itself is a bit lacking as it’s a fairly bare bones Early Access title.

Zombie Playground is a multiplayer-focused brawler with RPG elements allowing you to customize your character’s clothing, weapons, and class-type. At the moment, there’s a healthy selection of items you can outfit your character with, mostly a mix of various clothes and accessories of different color. Character wise, as in player models, customization is a little thin as at present there are only two available options: a fair skinned boy and girl, which doesn’t allow for much character variety yet. 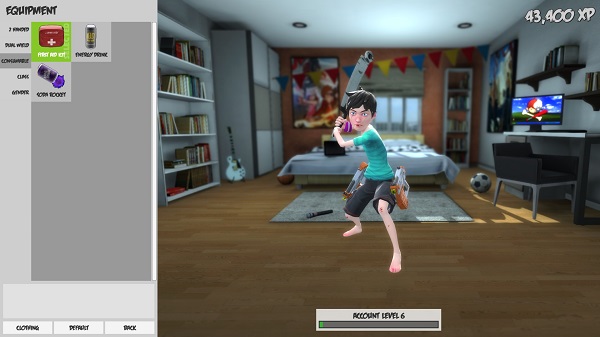 Once players  jump into the game, they’ll be met with two character classes: Bully (damage focused) and Rascal (speed-focused). Each player is armed with a chosen melee and ranged weapon devised from simple household items, tools or toys. Players can equip items at the character customization screen giving them in-match access to health and other boosts. Combat is centered around a light and heavy attack, and while the game looks great in motion, combat and movement overall feels a bit floaty. There isn’t any real guidance either on how to perform special attacks. They just seem to happen if you move and mash an attack button a lot.

There is currently one large arena map that’s an elementary school with multiple floors and classrooms. Each “mission” in the game is simply a revisit of the map with different goals – kill 10, 50, or 100 zombies, or fight a boss character. These missions can be taken online with up to 4 total players, but the game’s multiplayer component requires an opening of router ports to work correctly. This added trouble of port forwarding to access its best method of play, means the player population is minuscule. I didn’t have luck finding other players when I wanted to play without friends who also had access to the game. 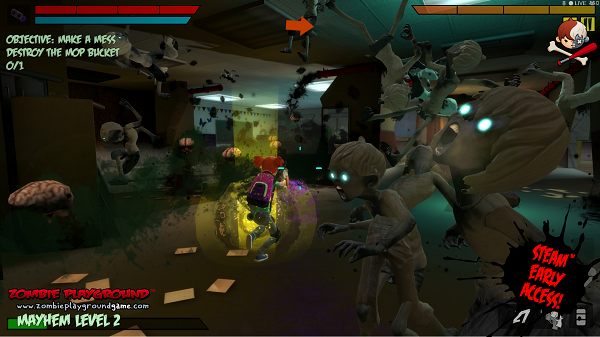 Zombie Playground is a promising basis for a lighthearted zombie game that you can play with your friends. It’s got solid visuals and controls for the most part, but is lacking in terms of content. And that’s the bane of some Early Access games – they’re just not worth investing in when they launch. You’re also not sure if they’ll make enough funds to further fund development. But if you’re inclined to support Zombie Playground, a game that I do hope will be worth checking out in the future, feel free, but for now there’s just not enough to keep your attention for more than a few sessions.