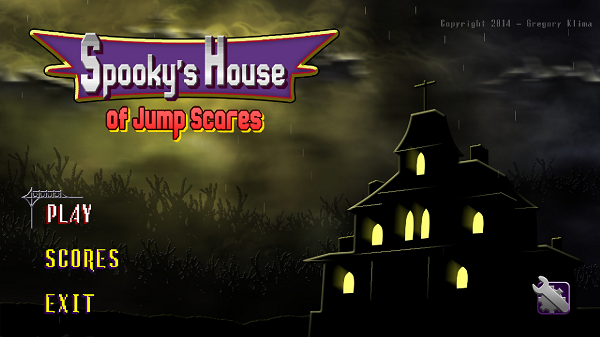 While I often praise independent developers for giving the middle finger to the mainstream games industry, there are quite a lot of developers out there looking to strike a quick buck with cheaply-designed games. In the horror genre, the most common example of that would be a jump-scare-a-thon Amnesia rip-off made solely to appeal to Let’s Players on YouTube. Spooky’s House of Jump Scares is therefore a welcome entry into the genre, as it pokes fun at these kind of games while presenting a healthy dose of actual, good horror.

The story goes that the player-character is a history fanatic living in a town whose greatest landmark is a mysterious mansion that has rested atop the nearby mountain for as long as anyone can remember. Nobody knows who lives there or when it was built, so you decide to go up there and find out for yourself. Once inside the door locks behind you and you are greeted by “Spooky”, the game’s mascot character, who challenges you to make it through the mansion’s 1,000 rooms before she vanishes into the ceiling.

Going into this game blind is definitely the most entertaining way to play it, so please keep that in mind before reading on. 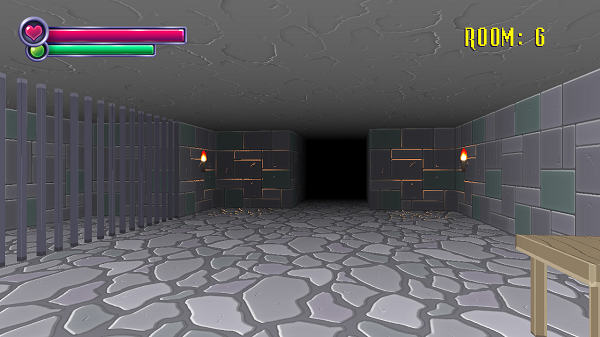 If I had to describe the game in one sentence, it would be: “Adventure Time mixed with the SCP Foundation”. The game presents you with a cute exterior and the adorable Spooky, yet as you explore the mansion further it soon becomes clear it was once a containment facility for a variety of creative monstrosities. Many a tragedy followed as creatures escaped one by one, killing employee and visitor alike, and now they are all your problem to deal with.

True to what Spooky says at the beginning of the game, there are a 1,000 rooms to explore, even if only 760 are currently part of the story. While this may sound like a lot of content, the idea is not that you explore each room carefully, as there is rarely anything to find outside of a few preset rooms that are for story purposes. Once monsters come into play, you will spend most of your time sprinting through rooms, spending barely two seconds in each one. You want to get as much distance from the monster as possible since there is no effective way to defend yourself, so it’s all about recognizing the layout of each room and maximizing the efficiency with which you move through them. 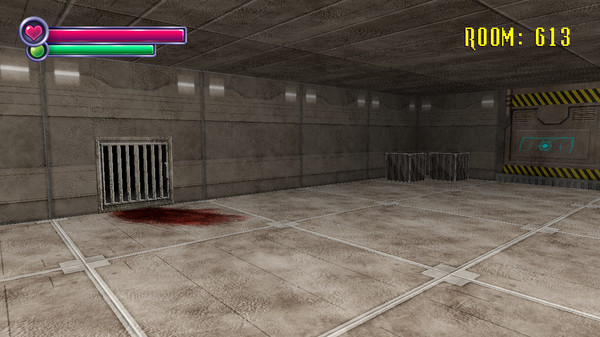 The monsters that chase you during this are a departure from the game’s colorfully-animated visual style and are more in line with something you’d expect from an early-90’s first-person shooter, 2.5D sprites included. In a recurring room with computers in it, you can read up on the specimens and discover the story behind them, which is actually pretty interesting to read and I hope more pages are added later in development. Each monster also gets a scripted introduction with its own areas and ominous notes that further add to the background of these foes. It’s a shame, though, that all enemies are dealt with in the same way: you just keep running until they stop showing up. Some have a gimmick, like the slime monster that creates random puddles of goo that slow you down or the Silent Hill-esque monster that makes the game’s textures go crazy, but these are small touches and I feel more could be done to add to the tension these chases are supposed to create.

The only monster I absolutely hated was the puppet, who looks like the Happy Mask Salesman from The Legend of Zelda. Essentially he’s an homage to SCP-173, which itself was based on Doctor Who‘s Weeping Angels. The idea is that he only attacks when you aren’t looking at it, but you need to avert your gaze in order to open doors, meaning you often get hurt the moment the next area loads because he always spawns behind you between room-transitions. The game is still in Early Access and there are a few kinks like this that are hopefully worked out over time, such as getting stuck on scenery or textures not loading correctly.

Overall, the horror is quite effective and relies a lot on anticipation. Sometimes you can go for several dozens of rooms without having anything happen, only for a cardboard cut-out of a cute spider to pop out of the wall and scare you to hell. I really like this, because it shows that a jump scare is literally just a matter of going “boo!” and what you do it with is meaningless. You then laugh it off and continue, only to then be ambushed by an actual monster, because Spooky is cruel like that. It’s a perfect mix between comedy, parody, and quality that gives each aspect enough development and appeal. I was looking forward to my next, funny interaction with Spooky as much as I was for the next encounter with a monster. This is also a great game to play spot-the-reference in, since it features tons of references to both popular and obscure horror media, ranging from obvious ones like rooms inspired by Silent Hill to tiny shout-outs to Madoka Magica. 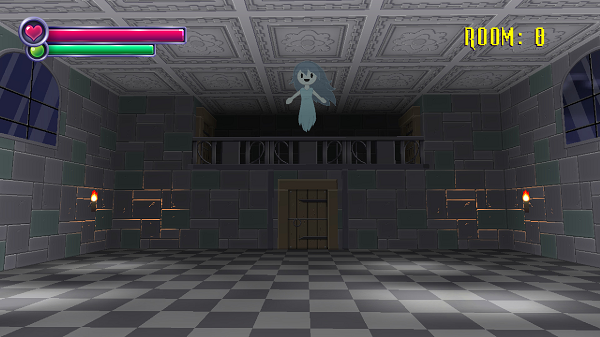 What the game really needs right now, however, is more variety. Rooms feel kind of empty and samey, with only a handful of furniture to populate them. There is also a severe lack of special rooms, which are interesting areas where you are safe and can enjoy a change of scenery or interact with something fun – an example of this being the computer room mentioned earlier where you can read up on the lore. These are fun, but there are so few of them they start to repeat and one of them I believe is some kind of hall-of-fame with pictures of Let’s Players in it. I don’t know, that just felt like it was below the game and I ran into that particular area quite often. More content is just a matter of time, though, so I would say that Spooky’s House of Jump Scares is well on its way to becoming one of the more interesting titles of 2015. The game is scheduled for a release in the summer, but those impatient should have no trouble jumping in already. There is plenty of content already here and it’s a blast to play.