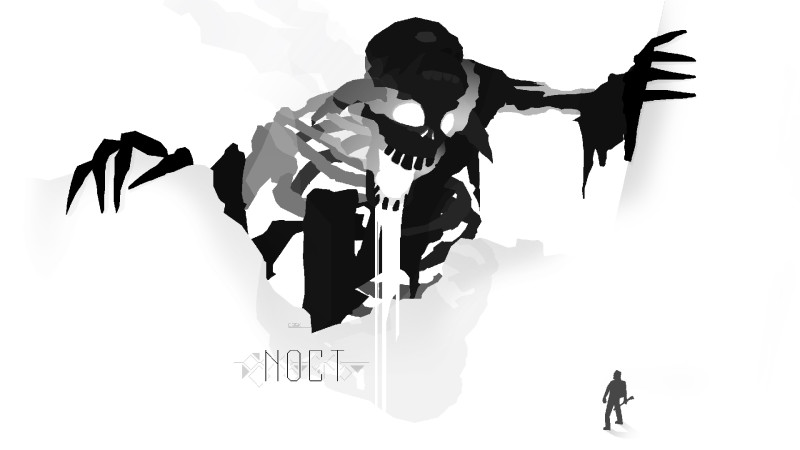 Multiplayer horror is something that the Triple A gaming market has been trying to do for years. Dead Rising, Resident Evil, Dead Space, lots of previously single player horror experiences have been trying to do the cooperative thing for years now, with varying levels of success. Even Silent Hill has a multiplayer title now. But one thing is pretty universal for all of them: they aren’t especially scary. Even when they’re trying real hard, they just can’t evoke the same kind of fear that a single player experience can.

Noct, a new multiplayer survival horror game from C3SK and Devolver Digital is very different. I’ve never played a cooperative game that felt so… lonely before.

It is the future, although not in a flying cars and jetpacks kind of way. Something terrible has happened, leaving the world a desolate, ruined wasteland. Shadows of the world that was flit by as we wander through the fog – the empty husks of automobiles and the ruins of what were once homes stand as silent reminders of a world lost. This was our home, and traces of the life that was once so plentiful can be seen beneath the ashes. This cold, dead feeling is only exacerbated by the game’s choice in camera and HUD, that of a black and white thermal military drone camera. It’s about as detached as you can get from the action, and it leaves me curious as to whom we’re really playing as. You see, there are two characters at all times, even when you’re playing solo. The ‘survivor’ and… I don’t really know what to call them, but lets say they’re… the Overseer. 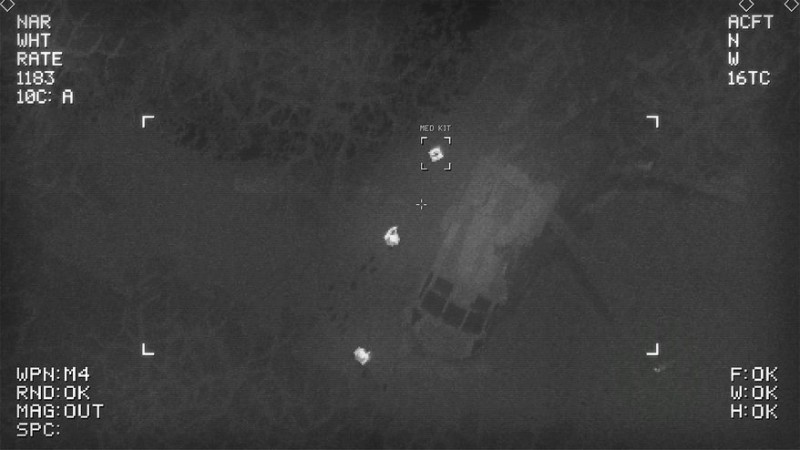 The Overseer watches everything you do, and gives you directions as to where to go and what to do, and considering that we seem to be watching events from his perspective, it adds a level of detachment that is difficult to accomplish in a video game. We feel less like we’re the little white blip, moving around and fending for survival, but more that we’re watching them. The character on screen is portrayed as neither male nor female, they have no name, and their input into the conversation is minimal. They’re trying to survive, and the Overseer is offering them help, in exchange for helping them with some sort of plan. These characters don’t know each other, they don’t know what each other’s faces look like, who they are, or where they’ve come from. The survivor is left with no choice but to trust the faceless benefactor that is guiding them through this grim void. And we aren’t even let in on what the Overseer’s plans are, and even as the player we can only assume that their intentions are good. It’s difficult to tell for sure, especially with the morally grey to dark tone they come off with. Especially upon a survivor’s death.

Starting up, the survivor is given the choice of taking the Overseer’s help, or trying to fend for themselves in a world where death could be around any corner. Tough choice. The survivor is directed where to find a weapon, ammo, and more, before being sent to locate a valve stored aboard a dry-docked ship, at which point the world is left open for us to explore. The fuzzy thermal imaging lowers the draw distance that we can see to a small circle around the survivor, not unlike Silent Hill‘s fog, and the trek is haunting as we pass the corpses of long forgotten cars and empty streets. There is a map, but it’s mostly useless, showing only the blurry landmarks against the darkness of what remains to be explored. It is here in this wasteland that we encounter the dominant predators of the land. Giant, mutated insects, slithering through the mist and shadowing us through the darkness hunt the poor survivor, who isn’t always prepared to take on the hungry animals. 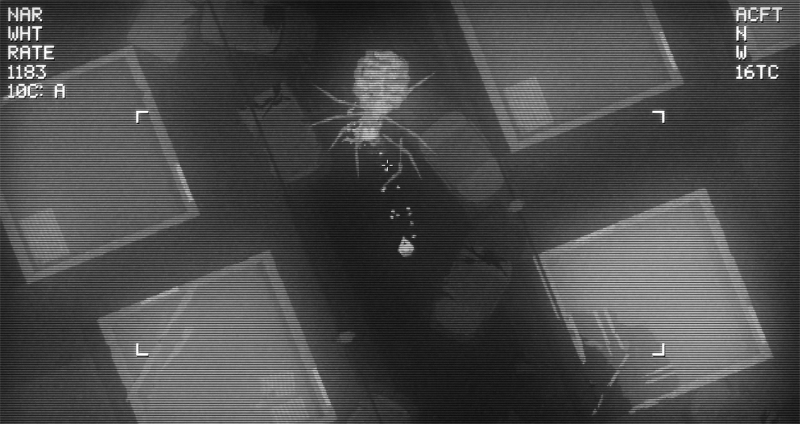 Little prepares the player for these encounters, a subtle shift in music and the ominous words “Uh-Oh” float up from the survivor, leaving the player panicked. What-oh? What’s coming? What did our little survivor hear? Or see? Sound is mostly subtle and often distant sounding, only letting us know of the most basic gameplay requirements (picking up items, firing a weapon, etc), and these squirming beasts twisting their way out of the darkness towards us is startling, and they can often come from places you’d least expect. If you aren’t already backing up and firing by the time the creature has entered your scope of vision, you’re dead. Death is as sudden as it is instantaneous; when a monster catches up, and if it even so much as glances pixels with you, the screen flickers and the survivor is gone, occupying a new space somewhere between the beast’s belly and what it didn’t like. It’s panic inducing, and feels very real. It’s a moment of horror followed by sudden silence. Chilling is the word I would use. Especially from the other end, the Overseer left to ponder his thoughts.

You are given the option of locating another survivor, enforcing the concept that we may be playing the Overseer more than the survivors, and once we locate one, we have to deliver the grim news.

The last survivor I tried to help didn’t make it.

I need you to loot the carcass.

Don’t make this any weirder than it already is.

It’s a creepy and sad conversation, leaving a moral ambiguity to the Overseer that makes the help seem even less on the side of the survivors. They need each other, but that doesn’t meant that they care about each other. There will always be another survivor.

Multiplayer is no different – the survivors don’t know one another, and don’t care about one another. Survival is the goal here. There’s no voice chat option built into the game, so aside from getting everyone on Ventrilo or some similar program, using the text chat built into the game is even more chilling. Talking with someone via text is already somewhat of a disconnected activity. Things can be taken the wrong way, or the right context might not be able to get across. Talking to someone is difficult without knowing the tone of each other’s voices. And that problem is amplified in Noct. Fellow survivors can turn on yours whenever they please, and they don’t have to be a good actor to lie to you about their plans. It’s a paranoid and lonely type of multiplayer, and betraying others to further your agenda is an equally strange feeling. Shooting them in the back, or leaving them for the giant thing to chew on while you run ahead safely feels bizarre, and lonely. Nobody is a friend here. They’re all just so much rotting meat, to a certain extent. The point is to try and last longer than the other guy. When it comes to “survival” games, it feels authentic, and evil. 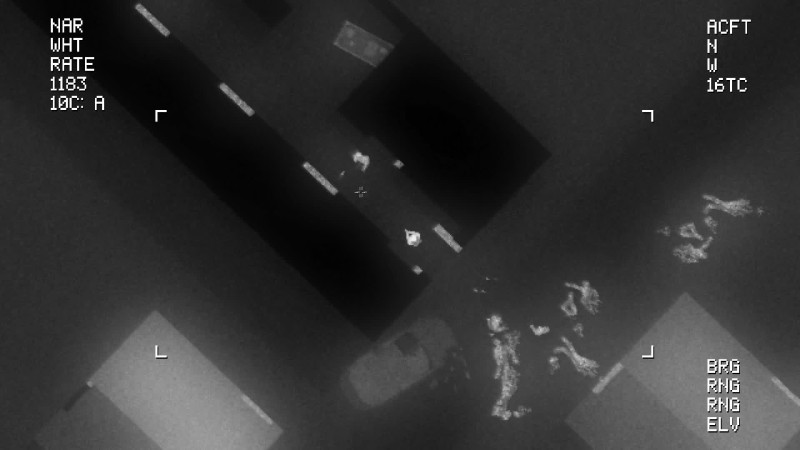 Overall, I can’t wait for this game’s full release. It is available through early access at the moment for $9.99, It’s definitely an experience that I can truthfully say is worth your time. Best way I can sum it up? It’s the controls and perspective of Hotline Miami, with the mood and ambiguity of Limbo. You want to feel not only scared, but awful and maybe even a little cruel and detached? Try Noct. It’s worth it.