Another day, another Steam Early Access title hoping to bring the scares to folks while in an incomplete state. But don’t worry, everyone, for the game I’m talking about today is Malebolgia, and it’s quite promising. It’s also not yet another first person indie horror game that’s aping Amnesia or Slender. Thank the heavens for that.

Developed by the one man studio that is Jochen Mistiaen, Malebolgia is a third person survival horror game set in a castle occupied by ghosts and demons. Said to be inspired by Dante’s Inferno, the game puts players in the knightly boots of Leopold, a warrior that’s come to discover that his home has fallen into hell.

Upon first look, Malebolgia is eye catching because of its cell-shaded, minimalistic visual style. The castle, in all of its European (possibly Italian) regalty, is clean, sharp, and lacking texture but not ambiance. Leopold’s torch lights the way through the castle’s halls, adding color and moving shadows around him. The effect this creates makes a pretty unique looking game that doesn’t compromise its horror tone, even though it’s lacking detailed textures. 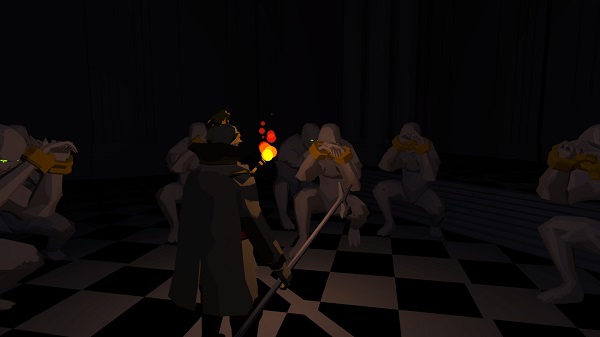 As Leopold, players must explore the stark white halls of the castle, equipped only with slow-moving halberd and a torch. Combat in Malebolgia is slow and reliant on well-timed attacks and dodges. In its current state, combat could use some work as there are some hitbox inconsistencies (which I’m told will be addressed this month in a patch). Attacks come in the form of a swipe, a heavy slam, and a stun attack with the torch. The torch itself is both a source of illumination and a representation of Leopold’s health, with wall-mounted torches being used to recover small bits of health at a time.

Enemy encounters in Malebolgia are stressful as Leopold can only take so many hits before he fades away. In the couple of hours that I played the game, I encountered several enemy types, each with their own attack patterns that must be learned in order to defeat them. Larger mini-bosses yield passive upgrades to Leopold combat abilities, meaning exploration is beneficial as the true bosses in the game (which at the time of writing I’ve yet to defeat the first), are fairly difficult and will require Leopold to be at the best of his abilities. The downside to combat, though, is that in its current state it can be a little dull. New combat actions will be added later in development, but as it stands, options are fairly limited and not all too engaging, mechanically or visually.

In what I’m learning wasn’t just my observation is that Malebolgia reminds many of Dark Souls, not only in its save system which refreshes the world state and enemy spawns, but also its pacing and creature encounters. There’s a distinct influence from From Software’s series apparent, but not one that’s negative at all. If anything, it paints this game as one that’s purposely challenging for the sake of being a tough survival horror game. But of course even a challenging game needs to be balanced well, and the game’s Early Access state may suggest that it will be worth waiting a bit to ensure the developer balances the game further.

Exploration in Malebolgia can be a little overbearing at times, with similar looking rooms and a map that doesn’t allow for zoomed panning. My first time with the game had me a little on edge, not because of the atmosphere, but because I just felt lost and annoyed. Overtime this becomes less of an issue, but tweaks to the game’s map would greatly reduce exploration frustration. 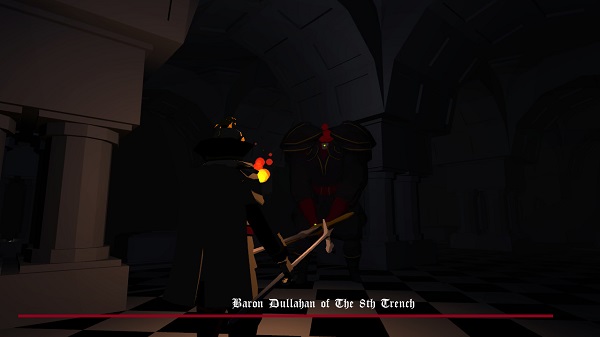 Despite its current flaws, Malebolgia is a breath of fresh air in the sea of cookie cutter indie horror games out there. And despite its minimalist visual style, there’s a good dose of atmosphere to be had. But because it’s an explorative and narrative driven game, it’s one that I will sit back and watch develop further before I jump back into it. There’s some extra polish and balancing to be had, surely, but Malebolgia has a lot of potential to be a hit with fans of the survival horror genre, and I look forward to its continued development.