It’s no secret that the open world survival genre has its fair share of titles made by developers jumping onto the bandwagon due to the observed success of other studios. With the genres biggest contenders being Rust and DayZ, two Steam early access games released in alpha states but still amassing large financial success, the genre is ripe for tapping. In comes Daybreak Game Company (formerly Sony Online Entertainment), the studio behind DC Universe Online and PlanetSide 2. Poised to get a piece of that survival pie (or something more appropropriate like a can of beans), Daybreak has released H1Z1, a F2P survival game that wears its admiration on its sleeve.

By the name alone, it’s quite obvious that H1Z1 includes zombies in some capacity. Learning more toward DayZ in its general theme, one that Daybreak has acknowledged as inspiration due to the game’s quality and success, H1Z1 throws players into a post zombie outbreak world, requiring players to scavenge, build, and survive. Right out of the gate, H1Z1 launched with mechanics Rust or DayZ had not respectively implemented yet, such as base building and vehicles.

Launching with a mix of mechanics found in both titles, H1Z1 offers its player-base a variety of options in their method of survival, but not everything is up to par with the competition. Since release, players have faced some serious technical hurdles, one being finding any substantial loot at all. When I first started playing H1Z1 myself, I found that most of my survival was tied around foraging for what berry bushes I could find, spending minutes at a time eating those just to stave off hunger. Loot tables have continually been adjusted since release, but it’s still too hard to get a reign on what items to expect, where they’ll be, and how likely they’ll be there.

Players must craft items in H1Z1 by using a discovery menu. Mixing and matching items in this menu can lead to new recipes being discovered and logged for future reference. It’s not a system that’s as generous as Rust’s, with a large selection of basic blueprints made available from the start, but it’s not as unforgiving as DayZ’s “figure it out” system. Crafting anything of significant value will take some time as players start with nothing more than their fists and a flashlight – no tools.

H1Z1 operates on Daybreak’s dedicated servers, assigning specific character slots per server. Different server settings can be found, including first person only, player v.s player, player v.s environment, or Battle Royal. Joining a server can be a bit of a hassle due to the wait times associated with the server population, with some reaching up to 15 or 20 minutes. This is not exactly ideal, as it’s a tad tedious and punishing for players that want to ensure that they repeatedly play on active servers that they enjoy. Once in a game, players are thrown into a map that contains several cities, suburban zones, and other landmarks. 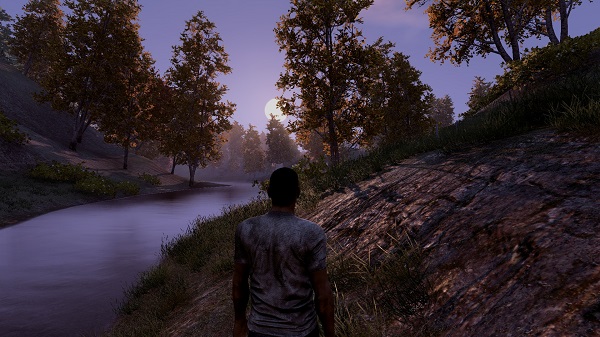 Where H1Z1 currently stands above its competition is definitely in its visuals. An update a few weeks after release drastically improved the game’s lighting, and the results are very pleasing to the eye. Some texture work and zombie models aren’t very good at the moment, but neither are a true eye sore. Optimization is also pretty decent, with H1Z1 rivaling Rust’s ability to maintain a consistent framerate, and outperforming DayZ by a large degree.

The map of H1Z1 features well-made looking towns and urban areas, complete with shopping centers, stores, and little districts that make the map feel like something distinctly Americana and designed by artists with attention to detail. Roads are littered with broken down cars and off-road trailer parks can be found on fields, all adding up to a dense and lived-in world. But perhaps it’s the map that leads to my biggest problem with H1Z1: it’s just far too small and can easily become overcrowded. Walking the line between an experience like DayZ and Rust, H1Z1 supports a lot of players per server, some nearing the 100 count, but its gameplay hasn’t been balanced yet to accommodate the studio’s impressive netcode and small map size.

In my experience, H1Z1’s player-base is very PvP oriented, and while this is perfectly fine as it’s an expected behavior of people in a game like this, the game itself doesn’t feel like it’s balanced enough to effectively make solo play a viable and fun option. Playing alone runs the risk of being overcome by players playing in groups and the game’s own unpolished combat system. Starting fresh is a frustrating experience on PvP servers. With the game’s current early access version asking for the minimum price of $20 (a price for early access buyers that want to contribute feedback) , I’ve personally not yet been able to play with friends, something that seems very much needed in order to have a chance at survival, or at least getting acclimated. 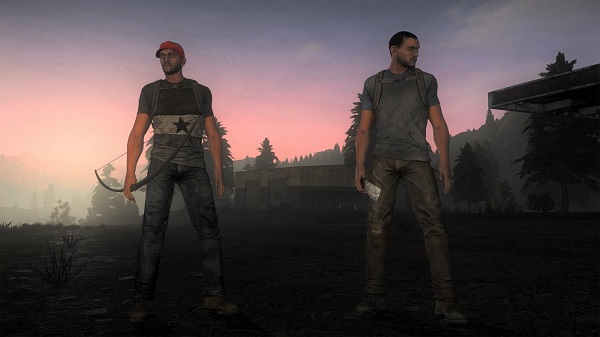 Player vs environment servers don’t offer much excitement either because the game’s namesake, the virus that has turned people into zombies, hardly ever comes into play. Zombie quantities are very low, with lengthy stretches of time in between encounters with just a handful. This is perhaps a good thing, though, as combat against zombies is very choppy and hit detection is poor. But outside of zombies, these servers exist just for players that want to build a base and kill the occasional animal. It’s an option for players wanting to avoid the pains of PvP, but I’d rather have a better experience in a server where I can get killed, but have the know-how and skills not to be.

A lot of H1Z1’s gameplay seems centered around player-purchased supply drops. Being a F2P game, Daybreak opted to monetize on H1Z1 with supply tickets and cosmetics. Supply tickets allow players to call in a supply drops filled with a random assortment of items. These drops are brought in by a plane that all players on the server will see or at least hear. This means that even though someone purchased a supply drop, they’re not entitled to it at all and all players within reach can battle for its contents. Whereas DayZ’s top priority is to get well armed and Rust’s is to have a fortress to call your own, H1Z1’s focus seems to push players into battling for supply drops. That’s just not fun for me. Together with the shoddy combat and difficulty getting situated when playing solo, these events are just unappealing.

As far as F2P monetization goes, H1Z1 doesn’t currently push buttons. Initially, Daybreak came under fire for how supply drops were coded at the game’s launch, dropping high-tier loot near those that purchased them on low population servers. This issue has since been addressed, though, and promises of purchases mostly bound to cosmetics don’t sound too bad. An area of concern that I do have stems from examination timers. When players examine a world-container like a drawer or car, a little meter needs to reach completion before you can examine its contents. As is, the timer can be a little slow (especially when you just want to eat a dozen aforementioned berries), and I wonder if Daybreak will monetize this aspect with a speed bonus. 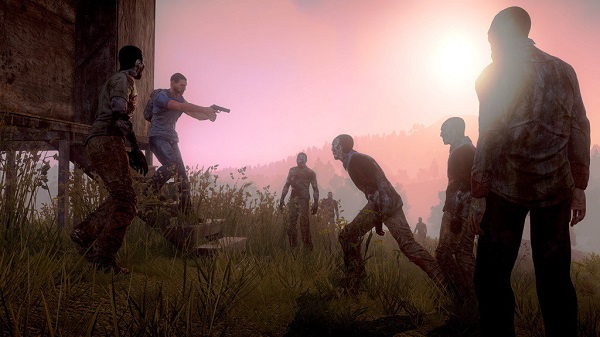 I am an avid DayZ player, and the idea of a game directly competing with it doesn’t upset me. I welcome competition, because all the games competing will grow as a result. Prior to writing this impressions piece of H1Z1, I purchased Rust for the sake of comparison. Having played all three of these titles now, I’ve discovered that each of them takes a certain amount of time to click with me: when I reach a point where I understand the game’s elements, how to achieve and create new goals, and become knowledgeable enough of the game’s inner-workings. With H1Z1, I’ve just not managed to click with the game yet. Granted, DayZ’s approach to survival is more straight forward than either title: keep eating and don’t get shot, and Rust’s is to make a shelter and collect resources until you can continue to grow. With H1Z1, I feel that there is a large hurdle to get over, one that includes eating a lot of berries, examining a lot of empty containers, and avoiding armed groups. I haven’t given H1Z1 the amount of attention as either of the other two survival games I own, but that’s largely in part to the struggle to click with it. The parts are there for H1Z1 to really appeal to me, but just not at this moment.

In some ways H1Z1 will probably be ahead of the competition, largely in part due to its development studio having a lot of experience in large-scale multiplayer focused games. But in other ways it may fall behind the competition, and not just because it’s the youngest contender. H1Z1 feels like a balancing act that’s struggling with incorporating survival elements from popular titles like Rust and DayZ, while also adapting those established survival mechanics to an experience that’s going to be F2P focused. I have no doubt that Daybreak will find a good balance in due time, but as it stands, I’d suggest waiting before checking in.