On our final day at E3 I had the opportunity to check out 2Dark, a game by Alone in the Dark’s creative force, Frederick Raynal. The top down, horror adventure takes place in Gloomywood following the investigation of Mr. Smith. Prior to the game, Mr. Smith lost his family to a serial killer, and has now made it his mission to save other children from a similar fate.

2Dark is not the conventional horror title I’m accustomed to. As it was explained to us, the game works against the grain in terms of what we traditionally find scary. Many in the horror genre now are focused on just trying to stay alive or trying to escape, and understandably so. Yet, 2Dark’s Mr. Smith is confronting Gloomywood’s most terrifying villains head-on in an attempt to stop something much larger than himself. He’s trying to save children, and escorting several small, panicking kids proves to be the most frightening part, as they are unpredictable.

What I saw from 2Dark certainly has my interest, and it will be one I follow until launch. In the nature of true survival horror, the game limits resources and demands players make use of their surroundings to progress. Mr. Smith does have the option to use his gun, but with every use that’s one less bullet for later. There are no infinite resources, there’s no pity gear thrown at the player prior to encountering a more difficult fight. 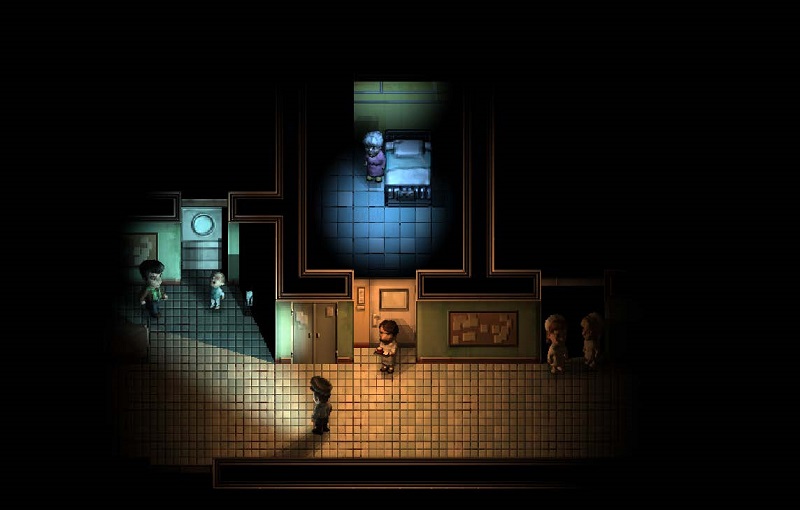 The game isn’t another action-adventure title masquerading itself as survival horror. Not only are resources limited, but save points are as well. In the spirit of the genre, there are consequences for all poor choices Mr. Smith makes, including saving. Bookmarking progress in 2Dark is only possible by taking a drag on a cigarette. It’s a timely process, and if the pause to take out the cigarette and light it doesn’t kill the player, the actual smoke may. See, Mr. Smith isn’t magically immune to the harmful effects of tobacco. Smoke too much and he’ll die from the toxic substance long before any serial killer finds him.

These little details were some of my favorite aspects of 2Dark. The game also harkens back to some game design choices I prefer now, like forgoing the tutorial and throwing the player directly into the chaos. 2Dark feels like something in the same vein as Don’t Starve in that sense, and at no point are we told how Mr. Smith should proceed through the levels. He never knows how many kids are hiding, how many enemies are lurking, or what the next path is. The game asks players to figure that out themselves.  Throwing someone blindly into the fray encourages creativity, as some players will learn and manage their environments differently than others. There is no set path when it comes to tackling an obstacle in 2Dark, the only thing that’s definitive is the goal.

When it comes to rescuing the children, things can get chaotic. Just as to be expected of kids, no two are the same. Some of the children Mr. Smith encounters are well-behaved, and follow him without any problems through obstacles and around enemies. Then there are those who are terrified, and difficult to keep up with. Some of them panic and run back to their original hiding place if they come too close to a threat, some don’t run at all and risk being killed. Regardless, it’s up to Mr. Smith to protect and escort them to the end of the level. Losing a child to any of the terrifying creatures lurking in the dark means game over.

There are times when Mr. Smith can no longer hide and ignore enemies, so he must fight. The boss fight I was shown at E3 employed some unique mechanics. The children were used to locate the boss, who was a terrifying clown moving under the cover of darkness. When Mr. Smith couldn’t see the clown, the kids could, and by cueing off of their frightened shrieks the player could find the boss and take aim with a weapon.

I enjoyed my time with 2Dark, and walk away excited for its anything goes approach to gameplay. I’m intrigued by what’s been shown to the public, and now can only anxiously await my chance at saving a few unruly children. As of right now, 2Dark has no official release date, but will be out some time in 2016 for PC, Mac, Xbox One, and PlayStation 4.