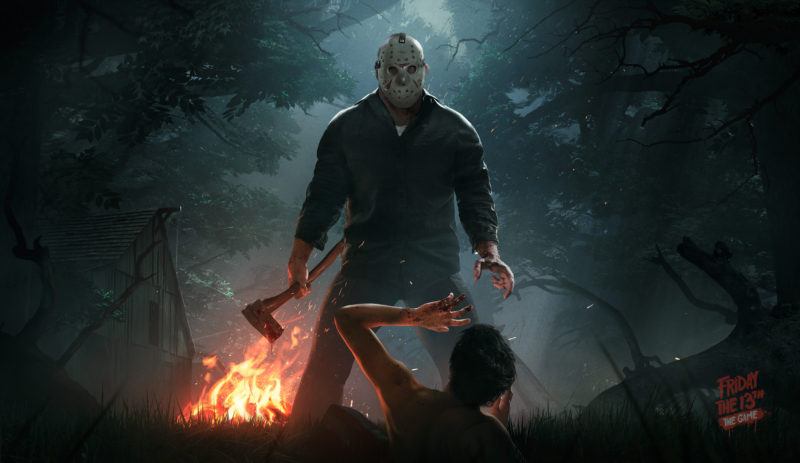 For fans of the movies, they should have no fear (other than fearing Jason) of the upcoming game’s devotion to the source material. The developers behind Friday the 13th: The Game showed Rely on Horror a sneak peak at the game at E3 2016, and they couldn’t be more excited about the prospect of bringing a fully-formed Friday the 13th game to horror fans. We sat down with Wes Keltner of developer Gun Media to show us the build of the upcoming game.

The game’s central design is an asymmetrical multiplayer game. Teams are divided between a group of camp counselors, with one player becoming Jason. Players need to meet a specific set of win conditions in order to escape Camp Crystal Lake and live to see another day. Jason’s sole duty is to kill any and all unfortunate victims who come across his way.

While it’s multiplayer only so far, we are assured that every dime given to the production of Friday 13th will be going towards some form of single-player, or offline mode. While we don’t know what this single player campaign might look like as of yet, the creativity behind the multiplayer portions assures us that Friday 13th is in good hands.

If the team decided to follow standard procedure and arm the counselors against a slightly more powerful Jason, the game would quickly devolve into a generic multiplayer combat game. Instead, they opted to cleverly translate some of the movie’s cinematic techniques into actual gameplay mechanics. Over the course of our preview, we got to witness playstyles of both Jason and the counselors, and what we saw has us incredibly interested in the way the game will handle once it releases in full.

Jason’s abilities in-game are less about overwhelming strength, and more about recreating his cinematic jump scares and the dread-inducing pace of his hunt. His moveset is designed around horror movie tropes like how Jason appears out of nowhere, or somehow manages to find a counselor who is hiding. Jason can “teleport” into a strategic location, appearing behind a counselor as if from nowhere. Additionally, Jason has an ability to “sense” fear, which gives him a locational tracking on nearby counselors.

Of course if these abilities were continuous, then Jason would become greatly overpowered. Instead, these abilities are limited by cooldown times and tiered strength. The longer the player holds off on utilizing one of these abilities, the more powerful they become to use. To recharge, Jason can induce fear in the counselors. His presence is enough; in our demo we saw one counselor get a peek of Jason through a window, which resulted in his fear going up and in turn contributing to what we learned would be detrimental counselor traits. The more a counselor is in fear, the more unruly they become, breathing louder, fidgeting, etc. This allows the person playing as Jason to employ physiological horror tactics against his or her opponents.

Lastly a rage mode is available to Jason after a long power up time. This allows him to charge through cabin doors and basically become that nigh invulnerable horror movie monster we all fear from the films.

This creates a very asymmetrical experience, but the developers are very careful about making sure the whole game feels balanced. The different counselors will have varying stats based on their horror character archetypes. So there’s going to be a “nerd” counselor and a “jock” counselor, and the two will behave very differently. While the jock will be obviously stronger physically than the nerd counselor, the nerd will have abilities that the jock lacks, like being able to fix broken cars faster. While the two characters will stand little chance against Jason on their own, together they can work together to reach one of the many winning conditions available to the player. It is mentioned however that players have proven to fall into the same “dumb shit” behavior as horror film victims. Teams scatter when they should stick together, or panic sets in and clumsy mistakes that alert Jason are made.

The game is intent on recreating the reality of the Friday the 13th films. This means it combines several real-world gameplay elements such as Jason becoming alerted by the noise created by the counselors. Whether they’re breathing too heavily, or struggling to fix a car to escape the camp, this is how Jason will come and find you. At the same time, as indicated by his abilities, the cinematic truths of Jason have been translated into game mechanics as well. It’s all about risk vs. reward according to Gun.

Wes is keen to mention how much of a love letter this game actually is. This goes into the cosmetics of the game as well, which will allow players to dress up Jason as whichever of his various film incarnations they prefer. Key locations from the films have been recreated as well for the digital version of the iconic Campy Crystal Lake.

While the full extent of these conditions haven’t been revealed to us, we were assured that the game will require counselors to complete some strategic steps to claim victory against Jason, without necessarily killing him. What we saw it looks very well thought out, and clever in terms of gameplay. The developers took great care in translating the Friday the 13th license into a video game, and that dedication to the source material is on clear display.