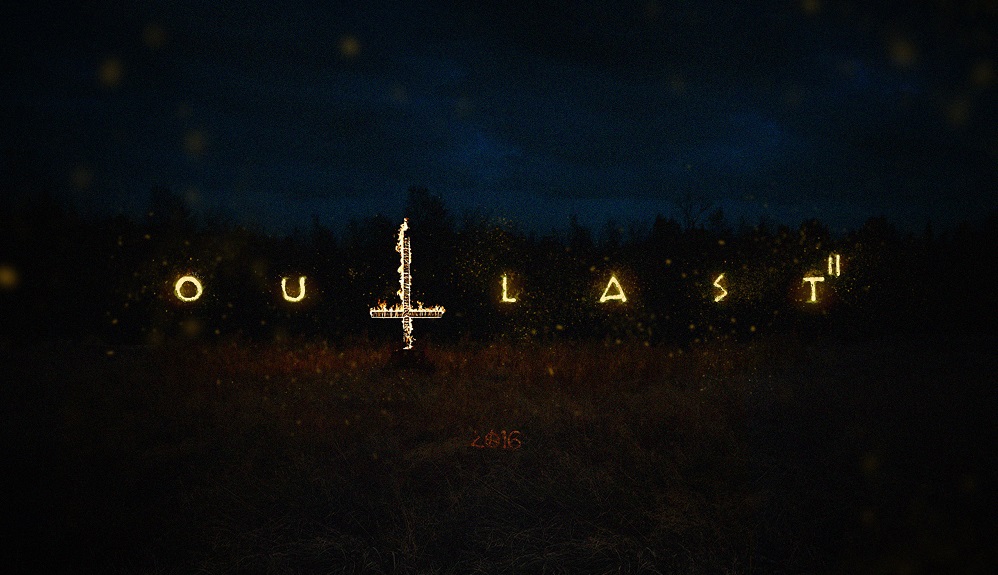 I didn’t think I’d be this excited for Outlast 2, mostly because it was kind of this nebulous idea of a sequel. Not much was known about it and then all of a sudden I was playing it. There was the initial announcement, and then some months later a teaser trailer. At PAX East 2016 it was in tangible form, playable and seemingly further in development than I had anticipated, and no less fucked up than I had hoped.

Developer Red Barrels is setting out to tell a different kind of story this time, swapping the whole insane-asylum-starring-crazies brand of cliche horror for something akin to zealots-have taken-things-just-a-little-too-far-and-now-spooky-shit-is-happening. Outlast 2 is heavy on the religious themes, immediately apparent by the burning upside-down cross in its title screen and the ranting and ravings of a mad preachers somewhere in the distance of the game’s rural setting, unseen but heard, with a southern drawl as thick as the cornfields in which I eventually got my head bashed in.

Outlast 2 follows journalists Blake and Lynn Langermann, a married pair of investigative journalists that set out to uncover the mystery behind a pregnant woman’s “seemingly impossible” murder. The two travel to the Arizona desert where they find the aforementioned spooky shit. Like really spooky. I didn’t jump in fear during my demo, but I did smile a lot and nod in admiration at Red Barrel’s continued success in fostering a strong atmosphere – this game has it in spades.

Beautiful graphics aside, the art direction in Outlast 2 is exceptional and highly effective. I started out my journey on a dirt path in the dead of night; the mountains funneled the moon’s light in my direction, obscuring what laid ahead. First impressions were very favorable, to say the least. Red Barrels certainly knows how to frame a scene, and that still appears to ring true with the sequel, at least from my short time with it.

The video camera POV from the first game returns in case you were worried the devs might have gone with a different route this time. The camera can be used at any time as a means to see in the dark via a night vision mode. Batteries, much like ammo to a gun, must be found and loaded into the camera. If you’ve played the first game expect nothing to have changed in this regard. It’s a little odd finding AA batteries in dilapidated and antiquated homes, but whatever.

After hearing fellow players in the booth next to me scream out in fear from their own time with the demo, I came across a series of small homes on my way to what looked to be a farm, perhaps on the outskirts of a small town. Suddenly I, Blake Langermann, heard my wife scream in the distance. Unlike the previous two protagonists in the series, Blake vocalizes more, as he called out to his wife Lynn. He also moans a lot when hurt. On my way to Lynn’s cries doors closed themselves around me and footsteps and whispers surrounded me – it all set the scene. I knew scares were coming. 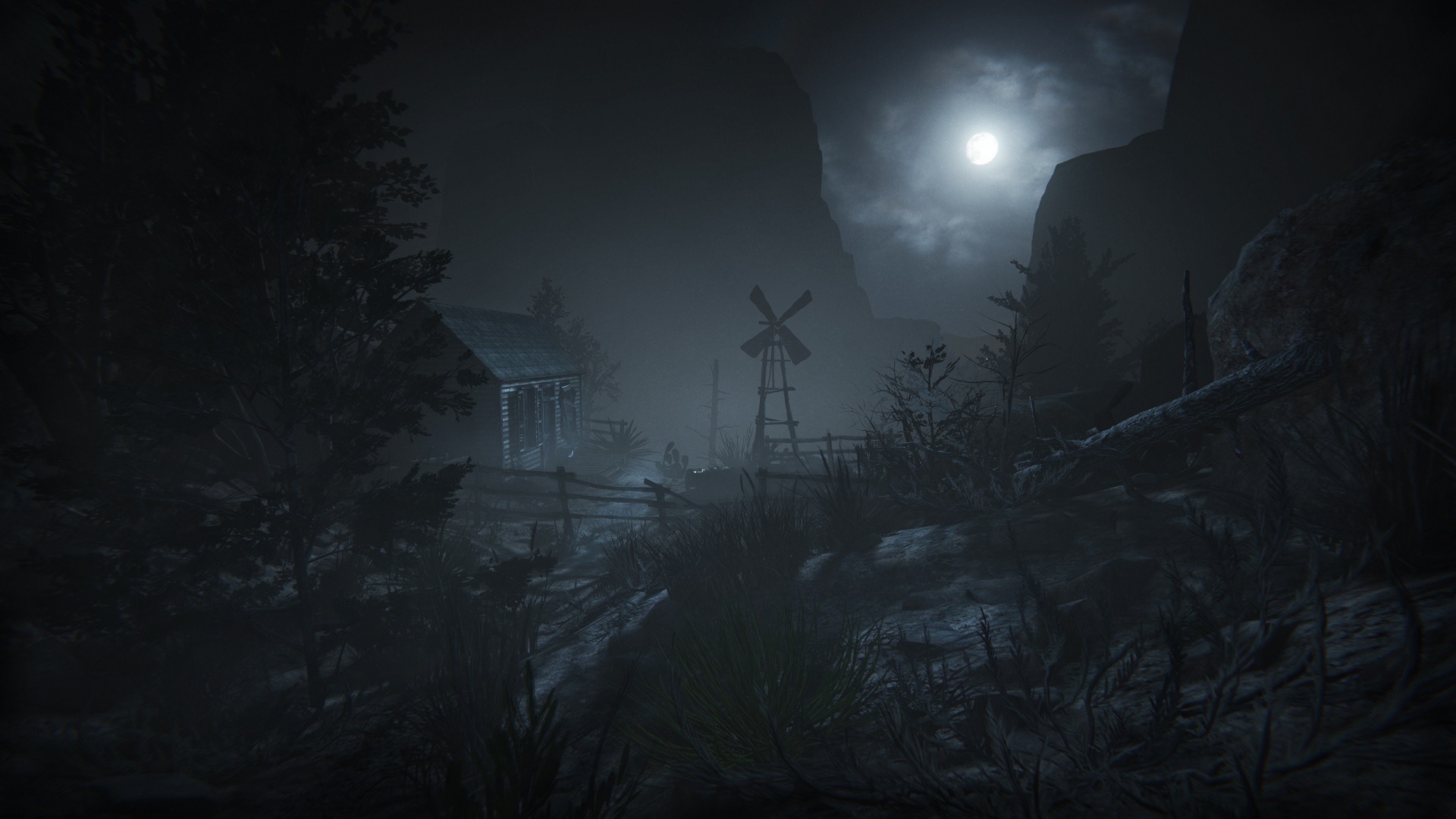 Like Miles before him, Blake is not a stranger to getting on his hands and knees, or climbing, to get past some obstacles. After being introduced to the mechanic of being able to climb through windows (all of the doors were locked of course), and having a crow try and jumpscare me, I soon found myself in a torture room, adjacent to a mass grave of children, highlighted by the moonlight above in a cross shape. Fucking hell, guys.

Shortly after walking over the corpses of dead children, hearing the crunching of small bones from their ripe bodies as I moved forward, I was greeted by a solitary well. Knowing how these things go, I knew this would be a jump scare moment, but what I didn’t anticipate was that a long tongue (or tentacle) would shoot out from the darkness to pull me in. Suddenly I was in a ventilation shaft. Hell. Yes. 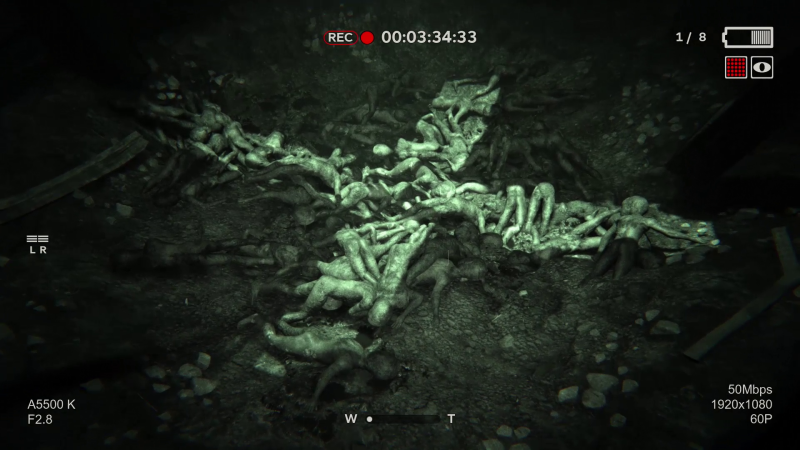 Something that I had hoped to see after the original Outlast was more mind-bending horror. I wanted illogical environments, trippy visuals and more of the unexpected. Outlast 2 seems to be on that track, confirming so when I found myself in a contemporary school when the ventilation shaft collapsed. After coming face to face with some sort of ghoul (noticeably not the Walrider from the first game), I found a glowing school locker amidst the others which were opening and closing violently moments prior. Entering the locker took me to a different part of the school, and shortly after being assaulted by a locale, I got thrown down a staircase somehow leading me back to the farm. This is the exact type of thing I wanted from Outlast 2.

Back from the trippy detour to the school, I became the target of multiple violent locals. As I ran out, I found myself in a cornfield, my pursuers explaining how much joy they’re were going to feel when they caught me. I deviated from the path a bit and found myself crouched amongst the crops, watching as the illumination of their flashlights cut through the vegetation in a visually impressive way. Fast forward an accidental bludgeoning on account to my impatience, and I reached the last scene in the demo. 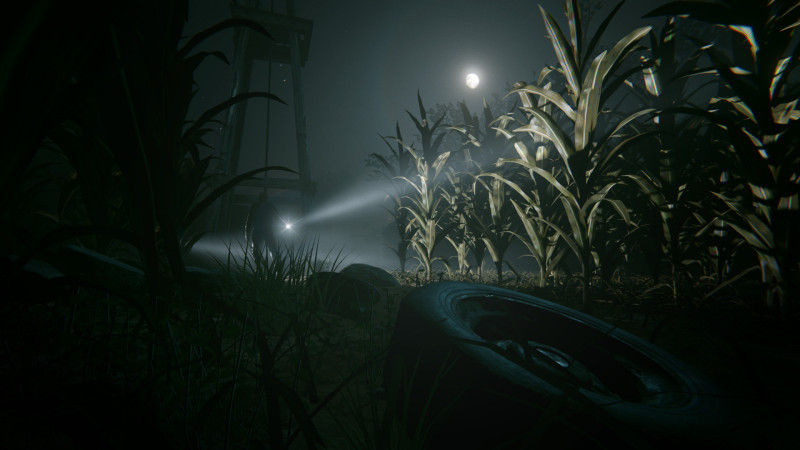 Red Barrels loves to push the envelope. This was apparent when Outlast: Whistleblower opted to one-up such moments from the base game as Dr. Trager’s torture scene and the man masturbating to a corpse by introducing Eddie Gluskin. Eddie wanted a wife, so what did he do? He severely mutilated the bodies of his fellow male inmates to “make” his perfect wife. In Whistleblower, the player stumbles upon his “ex-wives” of sorts, with their genitals turned into gaping crevices and their heads poorly sewn into their abdomens as if they were pregnant. The player is even subjected to an attempted castration from the recipient’s perspective by Gluskin.

But worry not about the sequel, because I can promise you this: Outlast 2 still has genital mutilation. The demo ends with Blake being stunned by a witch-like woman armed with a pickaxe. After being thrown to the ground, she slams the weapon down into Blake’s nether region and tears it away, leaving a shredded, pulpy mess.

Yep, Red Barrels sure does love themselves some genital mutilation. And Outlast 2 doesn’t seem to shy away from doing whatever it takes to scare players, and I admire that. They try really hard but do so in such an effective way that it doesn’t come off as gauche, surprisingly. These guys evidently love shock value. They’re also capable of competent game design and striking visuals as well. Add into the mix a heavy dose of supernatural (and perhaps psychological) elements, and I think they’re poised to make Outlast 2 a flagship title in the horror genre.