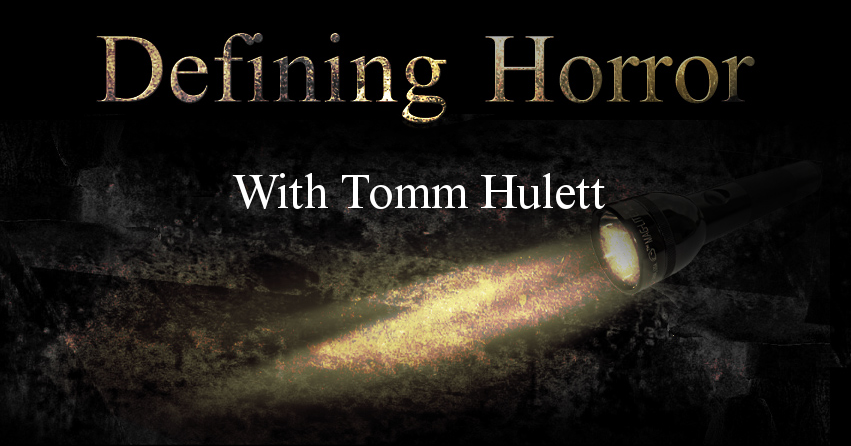 Below you will find Tomm Hulett’s definition of horror.

Back in the day, I remember reading that RPGs were the most difficult type of game to create. That should probably be qualified as “good RPGs are the most difficult type of game to create”, and I’d hazard a guess it had to do with the number of characters needed, all taking part in a gripping story, with events and gameplay that are inherently linked, and engaging numbers behind the whole thing so you can’t get too overpowered but don’t have to spend 20 padded hours grinding. Of course, this was circa 1995 and Survival Horror as we know it hadn’t yet caught on. If asked today in 2013, I wouldn’t hesitate in declaring Horror the most difficult type of game to create (good horror, of course). I base this assessment only partially on my history creating games in the genre, but also by looking at the industry as a whole and seeing how few horror games get made, and how previously successful horror franchises turn into action games that play out like bishounen riffs on CoD’s zombie mode.

Honestly, on paper, Survival Horror is a bad horse to back. You can count the RE-makes and SH2’s on one hand, while the genre’s also-rans number much, much higher. (And even among the successes, only the good RE’s could actually be considered successful compared to other genres.) But why’s it so hard to make good horror?

To me, good Survival Horror is about mind games. To scare the player, you have to understand their emotional state. And, since every player is different and could be sitting down to play for four hours or fifteen minutes, there’s only one way to do that—direct them into a specific state yourself. The original Silent Hill blinds you, forces you into an alley where the camera does an impossible tilt before the world melts and knife children murder you, whereupon you wake up and a cop gives you a gun. …And then a freakish monster busts through the window. Konami had most people with the fog alone, but the creep show progressed, point by point, until everyone was on board. That “jump scare” worked, not because jump scares are scary (they’re not!) but because players felt the roller coaster drop was finished and they were on the ascent, safe, ready to explore for real and defend themselves eventually… maybe after finding some ammo.

This sort of emotional control is why Horror games should cling to save points like a life raft; in our auto-save world, it’s impossible to know when the player is resuming the action. How long will it take them to ease into the atmosphere? Did they quit and rejoin mid-action sequence? How much of a reminder do they need to start having fun again? With typewriters and little red squares, the designer knows exactly when the “sequence” begins, and can neglect save points until after the payoff (or better yet, to set up an even bigger payoff).

Every element of the game needs to be a tool in the successful horror designer’s toybox. Character design, abilities, combat, controls, save points, camera angles… Survival Horror games need to understand game design and work to subvert it. Game mechanics are the only common language gamers have (seeing as they come from many different countries, religions, economic backgrounds, and two or more different genders!), so that’s where the horror needs to start.

Which brings us to the first element of Horror that is “so hard to do” – breaking the rules. Any good game designer learns, or better still, simply understands “the rules” at a base level. What are the most engaging ways players can interface with the game environment? What obstacles do they face, and how can they overcome them? What should good controls feel like? How much hand-holding should the game provide? How can story be effectively conveyed? This type of stuff is in a designer’s blood, and if he’s lucky, the blood that pumps through his development team.

Survival Horror design is sweet poison in that bloodstream—or it should be. It needs to decay those design fundamentals so the end result isn’t afraid to punish its players, betray the mechanical expectations they didn’t even know they had. Don’t provide ammo when they’re going to need it—put it behind a fence so they’re keenly aware they don’t have it. Take away their visibility, purposefully yank the aim camera, whatever—break the rules. You can’t shock somebody with a game that massages muscle memory

Which isn’t to say just make a crappy game and declare it a horror masterpiece—like grammar, you need to know what you’re doing wrong and have a good reason to do it anyway. The original Silent Hill used fog to severely limit the player’s vision because it provided extremely brief glimpses of the danger all around the player, and forced them to explore to the edges of the world due to poor Harry Mason’s inability to see inches in front of his face (but mostly to hide the PS1’s pitiful draw distance).

But subverting common tropes is only half the mind games recipe. While a general common experience can be assumed, we haven’t all played the same games and internalized the same mechanics. A good horror game needs to also break its own rules. Which, naturally, requires that it establish rules in the first place. The player needs time to sink into the world, adapt to its ambiance, and (presume to) understand what makes it tick. This doesn’t have to mean “give them peaceful explore time before jacking it to hell” either. To steal an example from Brian Gomez, the first window in RE2 explodes with crows. Any time after that, when the player walks past a window, they tense up and fully expect avian horrors to emerge. It doesn’t happen again—but the fear is established. Windows become a symbol of danger. That’s an established rule that is broken to great effect.

This can be especially fun with sequels betraying their precursors. The long hiking path that kicks off Silent Hill 2 is atmospheric and sort of cool if played in a vacuum—but if you played Silent Hill 1, with creatures bleeding out of the fog all over the place, and every noise being certain death, the weird rustling and growls that pursue James Sunderland create instant, gripping paranoia.

Establishing rules takes careful planning during development. Ideally as each mechanic is defined and designed, so are 10 or more ways to exploit or subvert it. Environments are conceptualized with full window dressing, built around the flow of fear and building up to the next scare. Really, the designers should be able to mentally play the game before a character model is even moving around gray boxes. Unfortunately most game development cycles don’t work that way. Mechanics are designed, levels are built, and then polished as much as possible, with fear and the finer details slipped in if there’s time.

To condense this ridiculous rant into a paragraph, Survival Horror means mind games—and mind games involve broken rules. This is why the really fantastic horror games are mainly coming from the indie space at the moment. Indies have the passion and time to delicately craft an experience that manipulates the player (and lower overhead means they can profit from the niche audience). Not only will a large team struggle to break the rules they’ve internalized; even when a developer “gets it”, the more risk-averse departments tend to squash quirky design as sales projections and focus tests predict grim results.

But that’s how horror films generally play out as well, isn’t it? The lower budget, passion-run films have all the real scares and surprises, while mainstream studios pump out safe gore fests each Halloween to profit off seasonal trends. Perhaps that’s just the fate of horror as a whole. In which case, I’m glad indies are getting more and more of a voice in the greater industry discussion—it means more Amnesias, more Lone Survivors, and heck even more Papers,Please.