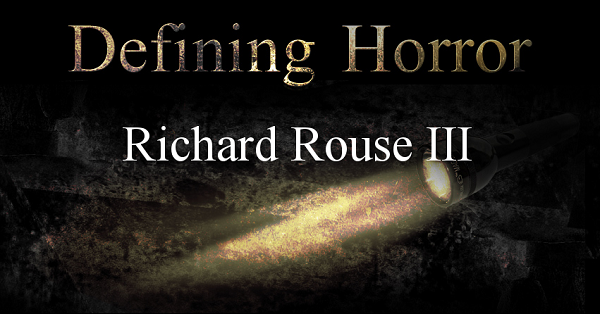 Below you will find Richard Rouse III’s definition of horror.

Horror fans can be opinionated about what qualifies as horror and what doesn’t. And they should be: they are the enthusiasts, the most dedicated, and probably most of the people reading this site. By contrast I find that the general public lumps a lot of different genres together as “horror.” From gothic slow-burn in the Mary Shelley and Bram Stoker tradition, to the ghost stories of Edgar Allen Poe, to the horror of the impossible and disturbing in Lovecraft, to the modern slasher film as born out of Psycho and Halloween, to the current craze of George Romero inspired zombie tales. I consider it all horror – all very different, but all disturbing. That for me is the common thread and the key to defining the horror genre – works that upset the audience’s expectations, leave them feeling uncomfortable, and make them contemplate the darker corners of the real world. “Is it disturbing?” is my personal litmus test for whether something is horror.

Games one might classify as “horror” are equally diverse. From the earliest adventure games like The Lurking Horror and Mystery House (and the recent return to popular horror adventures with The Walking Dead), to classic Japanese survival horror like Resident Evil and Silent Hill, to the action-horror games that subsequently came from the west like The Suffering, Dead Space and Left 4 Dead, to the modern first-person/weak-protagonist horror games like Amnesia or Outlast, to the modern permadeath survival simulations like Day Z or State of Decay. I throw all these into the horror bucket because they all deal in dark subject matter and are all disturbing in their own way. And all use the medium of video games in very different ways to scare the bejeezus out of you.

I think the horror genre is uniquely suited to games because of how immersive games can be. If horror is at least partly about scaring the audience, I can think of no better medium to provoke an immediate visceral reaction than one where the player is in control and must fight for their life. But I also think games are ideally suited for horror because they encourage people to truly engage with the material, to explore a dark world and uncover its secrets. Games are perfect for horror stories rich with environmental storytelling where trying to find out what the hell is going on becomes an obsession.

When we started work on The Suffering, we were deliberately going for something different in the horror space. We all liked Silent Hill 2 a lot, but didn’t want to make a Japanese-style survival horror game, titles that were at the height of their popularity in 2001. These games almost all featured a weak protagonist, very slow pace, camera that is often out of the player’s control, and deliberately gimpy controls. We were big fans of shooters like Half-Life, which borrowed elements of Resident Evil yet which no one would call a horror game. We wanted to figure out how we could keep the gameplay as empowering as a shooter, but still make it a horror experience. Because we were losing the ability to manipulate the player through forced cameras and bad controls, I felt we had to focus on making the game more disturbing than it was scary.

Starting the project, I immediately wanted to establish what type of horror we were going after, and wanted to look outside of games. So I came up with a list of five films that I thought embodied the type of horror we wanted to capture in the game. They were Psycho, The Birds, Rosemary’s Baby, The Shining and The Ring (the original Japanese film by Hideo Nakata). Almost all of these have moments of gore and disturbing imagery, true, but all pose questions that are never completely answered, all throw the world as we know it out of whack, all play on our subconscious fears of the real world. All but Psycho had a supernatural element. All play with the psychology of the protagonists, where no one knows who is sane anymore, where seemingly good people are pushed past the point of breaking. And as a result they are all disturbing.

Wanting to start with a game where the player could feel powerful and unconstrained, able to make choices in their gameplay, we created The Suffering’s main character, Torque. He is strong and able to handle himself; he can effectively shoot two pistols at once, and we never arbitrarily negate that empowerment for the purposes of cheap scares. So, we had to emphasize psychological horror and dark subject matter. We tried to create disturbing situations and events so that, as you bury yourself in the world and story, you are left unsettled and disturbed.

Part of achieving that “unsettling” feeling was including what I call “real world” horrors. The game is set in a prison and all the enemies are themed after methods of capital punishment. A slave ship is wrecked on one corner of the island, an abandoned mental institution on another, and centuries ago witch trials were held in the old town that is now half-abandoned. All these events were inspired by some of the darkest moments of American history. It was great to explore dark subject matter that isn’t often touched on in games, but also these were all topics that are fundamentally disturbing, that make you uncomfortable to discuss, that bring you back to the true meaning of horror.

My new project – unannounced as of this writing – draws on a lot of the same creative motivations as The Suffering. Dark real-world horrors. A twisted world the player must enter and try to survive. A capable player character and meaningful player choices about how to play. A narrative that changes as you play it. But is it horror?

Some would probably say not. There are no “scares” per se. There’s no supernatural element. But it is disturbing. This game deals with a very specific real-world horror that has barely been touched upon by games, arguably darker than anything found in my previous projects. It deals with the more intense corners of psychology and human behavior. Though the specifics of the game are fiction, it’s all based on real life events.

Some may think the horror elements in it justify it as an entry in the genre, but others will disagree. Regardless, it’s looking like it will be the most disturbing game I have ever made.