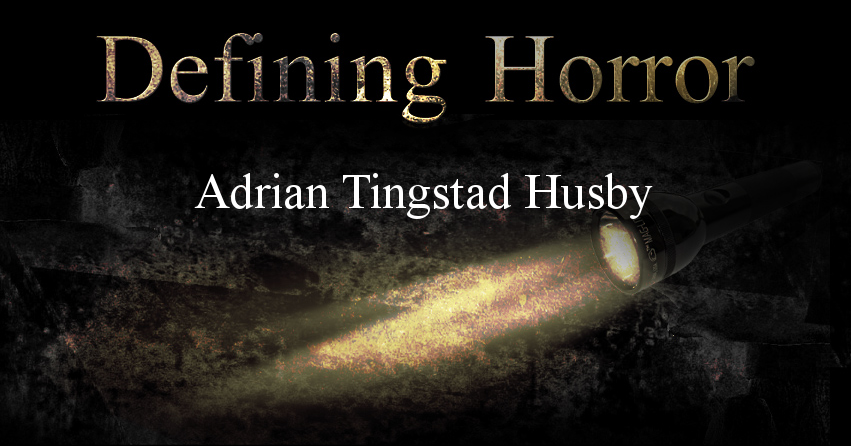 Below you will find Adrian Tingstad Husby’s definition of horror.

There’s varying views on horror at Krillbite Studio, but here is mine at least!

What I am most interested in when it comes to horror, is how it can be used as a narrative tool. I´m not really approaching it as “how can I make this as scary as possible”, but more like “what are we trying to convey here, and how can that be brought across most effectively?”.

If people are authentically scared while playing, you know that they are immersed and that you have their focus. So horror for me is more of a tool, for maintaining player focus and a desired state of mind.

In addition, fear is a very primal and honest emotion, and it’s one of the emotions that games have actually managed to target rather precisely. While a lot of video games struggle to evoke much emotional engagement beyond fun, satisfaction or frustration, it´s fascinating to see how emotionally involved people get while playing a good horror game.

Hence, horror games present themselves as a good way to learn about emotional engagement in games in general. I would be interested in exploring how some of the design principles at work in a game like Amnesia or Among the Sleep, might be used to provoke other emotions. As a player you know very well when you’re afraid or not, it’s a very distinct and obvious state of mind, which makes it easier to test what works and what doesn´t.

What elements keep players immersed, and what makes them feel present in the world you’ve created? Competitive mechanics like combat and stats? Or a more subtle approach, where the systems at play go mostly unseen? I suspect the answers to those questions could just as well be transferred to, say, an empathy game.

In Among the Sleep, the horror ties into feeling small and helpless. The uncertainty of what casts a shadow, what made a sound, or what’s hiding in the dark. If we manage to evoke the same feelings people remember from their childhood, we will in my mind have succeeded. And I feel horror is a very appropriate tool to reach this goal.

While working with horror, some ingredients have been very important for us. One choice was to remove all elements we felt were superfluous, like combat and GUI, to provide the space needed for the more subtle elements to shine through. We can’t compete with the players imagination, so instead of shoving a monster in their face, we tickle their thoughts with sounds, shadows and other small things.

A consequence of this is also that avoiding confrontation is your only escape, which maintains the crucial mystique of any horror experience. We want people to be thinking “what was that thing!?” instead of spending time to fight and study every creature. People often master combat systems, or are frustrated by them, either way the horror quickly disappears. This does not mean that threats in Among the Sleep are not real though, you will definitely have a good reason to hide! It’s crucial that the player doesn’t see a system that can be fooled, but instead see real threats that must be avoided.

Another important choice was to use the physical body of a child, so that you see your small hands while frantically crawling under a table for example. We think this makes the player feel even more like a fragile and helpless part of the world.