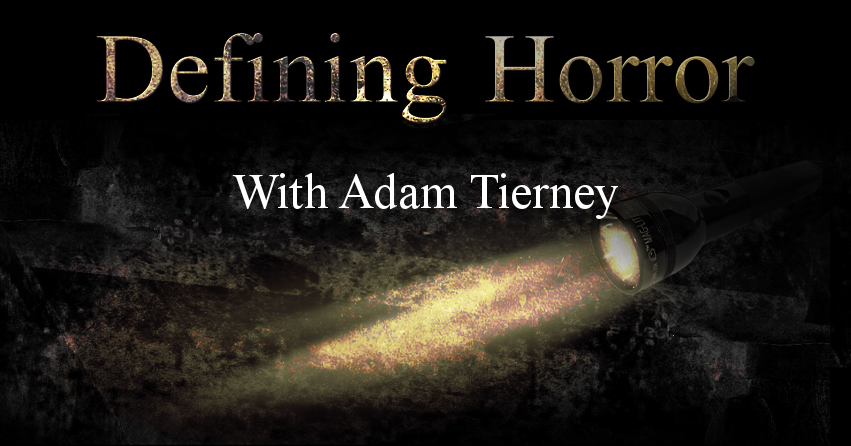 Below you will find Adam Tierney’s definition of horror.

Horror’s an interesting term. It means different things to different people, and can even mean different things to the same person, depending on the context. Broadly, it tends to be used as a catch-all term for anything gory, bloody, killer-y, sadistic, unsettling, and usually with a supernatural element (but in the absence of anything too sci-fi or fantasy, of course). A lot of horror films could be labeled ‘suspense’ instead, a lot of horror games could be labeled ‘action’ or ‘puzzler.’ The term isn’t really that useful outside of marketing to people that want to see characters get killed, or see someone kill their character.

The best horror is unfair. It’s a frustrating. It understands what the viewer wants and teases them with that outcome but refuses to deliver. Good horror is sadistic. But it can only succeed in being effective if the viewer cares enough about the characters to let themselves be heartbroken by the journey. It’s about creating and destroying love.

The two game systems I’m most proud of in my career were both horror-related. Both were emotional and involving, and both angered a fair number of people.

LIT was my first horror game, developed for Nintendo’s WiiWare download service. It was essentially the puzzling of Adventures of Lolo mashed with the aesthetics of Silent Hill. The player controlled Jake, a moody and overly-emo teenage boy, hunting for his girlfriend Rachael in a high school overtaken by inky darkness and skittering creatures. Rachael was a mostly disembodied voice on a phone, and if you moved quickly enough, you could hear an audio message from her every few rooms.

Rachael was the heart of the game, and our goal (over 20 or so VO clips) was to make the player fall in love with this cute, cheerful, optimistic character (who was initially just fascinated by the horror around her), then become heartbroken as all the hope drained out of her. At her lowest point, she tells Jake, “Tell my Dad I love him,” accepting the fact that she’ll die at that school. And that was really the most horrific aspect of that game – the slow death of her hope.

The game mechanic for these messages required you to never miss a phone call from Rachael. Miss one call and she would never call again, presumably absorbed into the oozing darkness. And we actually saw gamers online get very mad about that. Why should they get the ‘bad ending’ and have Rachael die just because they missed a phone call? Well…if they really cared about her, why didn’t they pick up the phone?

We created a similar system with equally-permanent ramifications on Aliens: Infestation, a Nintendo DS game based primarily on the 1986 James Cameron film. Cameron essentially just made a slasher movie with Aliens. It looked like an action flick, or even sci-fi, but all it really does is spend one hour developing characters that you fall in love with, then the next hour killing them off one by one.

So we wanted to capture that essence in our game. Infestation features around 20 playable marines. We gave each character a unique name, rank, back story, portrait, color scheme, idle animation, and (above all else) rewrote the entire script in the voice of each character. That means whoever you were playing as at any given moment would have their own unique humor, mannerisms, worries, hopes, and goals. We wanted each character to be someone’s favorite marine. And then we built a game that would brutally kill them off one by one.

As with Rachael in LIT, the idea was to devastate the player. But not artificially, by just telling them that a character was important and then offing them in some canned cinematic. If a marine died, it was the player’s fault (even though we stacked the deck against them). And once they died, they were gone forever. That character was wiped from existence, which I suppose is the greatest fear most of us have.

Just like LIT, some gamers online were frustrated that their favorite characters kept dying. They couldn’t save them. But that was always the plan (and the reason we gave players 20 marines to cycle between). They’re meant to die. You’re meant to get sad. Then angry, and take out that anger on the xenomorphs that killed them. The emotion is yours and it’s real.

So for me, horror is all about building a deep connection with the viewer, then jeopardizing or destroying that connection, especially when they need it the most. It’s about heartache, and (at least in games) it’s best when the player feels guilt for their own actions, not just those predetermined by the narrative.