When someone asks me which Silent Hill game was my favorite, like most fans, I say part two. The story, level design, and characters just resonate with me, and I love it. But when someone asks me which Silent Hill scares me the most, I say Silent Hill 4; and not because some people think it sucks. Because, it doesn’t. It has its flaws, but it’s extremely unsettling and disturbing. Silent Hill 4’s unique design and scares go overlooked because of its gameplay changes. Here’s what many of you might be missing out on. 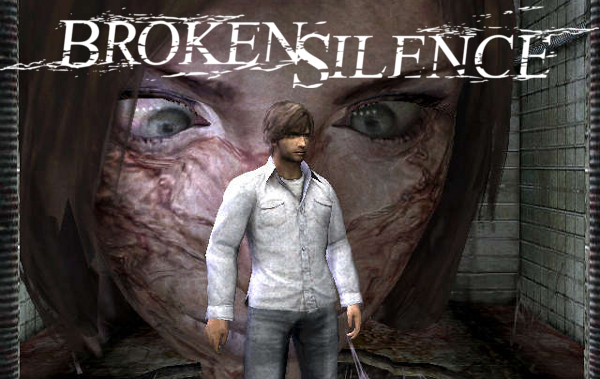 Silent Hill 4 puts players in the role of an introvert and borderline creepy voyeur named Henry Townshend. Already we can see where the scares start. Henry is the type of guy you would catch starring at you on public transportation when you decide to look around. In his apartment he has a peephole in the wall behind some furniture that looks into the next room. On special nights he peeps at his neighbor Eileen, while presumably increasing his chances of blindness and hairy palms. While players can peep at Eileen during the course of the game, I expect Henry did this way before then. 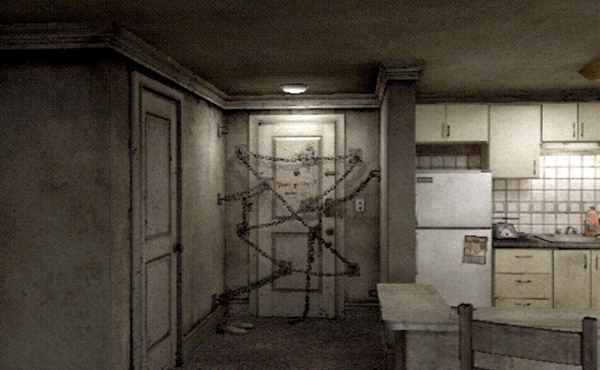 Henry awakes one day to find that he is locked in his apartment. His door is completely chained up, and he has no means of contact with the outside world despite being able to watch it from his window. The premise of Silent Hill 4: The Room is a creepy one. Henry can not leave his apartment nor can anyone enter or hear him. After several days trapped, a mysterious hole opens up in his bathroom. With little hesitation, Henry crawls right in.

Through the hole in the wall, Henry ends up in the nightmare world of Walter Sullivan, a psychotic killer hellbent on completing a ritual to bring his mother back to life. That’s cute, right? No. His mother is Henry’s apartment–or so he believes. Looking like an estranged Brad Pitt, Walter spends his time giving Henry a fuss and killing people despite having already died. The story of Silent Hill 4 is beautifully deranged. Despite Walter being a sick man, the game exposes you to the life he had to endure that made him a psychotic killer. He’s a tragic antagonist that suffered abandonment. It’s hard not to feel bad for the guy. Walter and his nightmare world give Alessa some competition for the most disturbing nightmare world.

Henry isn’t a bright man. Upon seeing his new friend Cynthia in a room where her blood has added a new coat of paint, he asks her if she’s OK. His lack of real emotion is somewhat aggravating, but I think it also adds an element of discomfort. His limited dialogue in the game allows for the player to imprint themselves in the story and not really have to follow a protagonist. 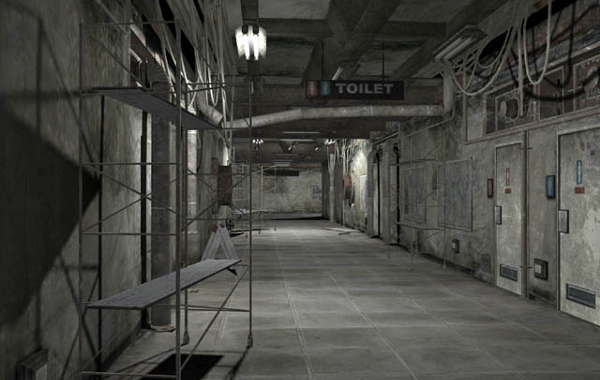 The art direction of Silent Hill 4 is extremely striking for me. Environments look bare and sterile, but also lifelike and dirty; Gray tones and neat layouts create an odd feeling of familiarity but also a slight dissonance when it comes to the games’ locations. Despite being abstract, the game does a great job of bringing immense realistic detail to its environments. The abstract areas in particular really do a great job at striking up that nightmare feeling: being somewhere familiar, but ultimately wrong in some unexplainable way. The game also adopts a distinctly Japanese style. South Ashfield, the town in which the game mostly takes place in, looks Japanese in design. From the subway to the apartment building, the locales just have a modern day Japanese look to them.

The Japanese influence continues past the level design. The first three Silent Hill games were attempts at emulating American horror. What we got was a unique style and amalgamation of both cultures interpretation of horror, but Silent Hill 4 turned up the notch on the Japanese horror influence and it’s clearly seen. It gives the game a different style I think. A style that is different, but welcome. 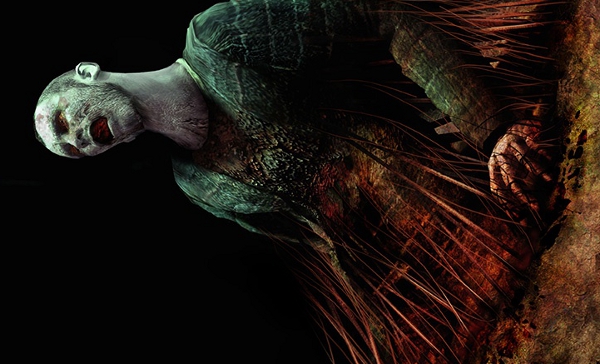 Japanese horror centers a lot around ghosts. Silent Hill 4’s main enemies are the ghostly apparitions of Walter’s victims. Ghosts aren’t scary? Call the Ghost Busters? Shut your mouth. These things are terrifying. They can’t die. They will follow you from room to room and with them comes a sound you will become all too familiar with. While in the nightmare world, you’ll see them ooze from the walls like bloody, black ink and float toward you. You can beat them until they’re stunned, but the only way to stop them is to use disposable holy swords to pin them to the ground.

Because the game operates around Henry’s apartment, you must go back there after every new area. But you’re not safe. The ghosts will start to seep into your world. Slowly Henry’s apartment becomes dirtier, scarier, and more haunted. You can use holy candles to exorcise hauntings, but your room becomes the center of the games creepiest moments. Having the game switch to a first person perspective doesn’t make this any easier on you. 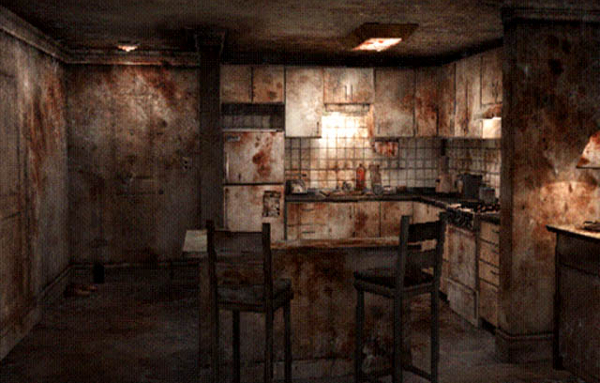 The monsters from Silent Hill 4 have to be the strangest in the series. From monkey-kids to burping nurses, Silent Hill 4’s enemies will freak you out.

The dog enemy type in Silent Hill 4 bother me a bit more than the dogs in Silent Hill 3. Sure, the Silent Hill 3 dogs should be scarier because of their split heads, but these mutts have long shriveled tongues and cancerous skin. When struck, they scream like jaguars. Jaguars!

In the hospital portion of Silent Hill 4, there are tall, slender female patients with gray, rotten flesh. They walk around with pipes in hand. They’re pretty menacing–like all extremely tall women are. They move toward you with monstrous grace and don’t hesitate to slap you silly.

When these lovely ladies get hit back, they burp at you. It’s a little weird and not very lady-like, but one swift hit by the hand of Henry causes these women to make a sound similar to a burp. Their stature and tendency to attack in small groups makes them dangerous. 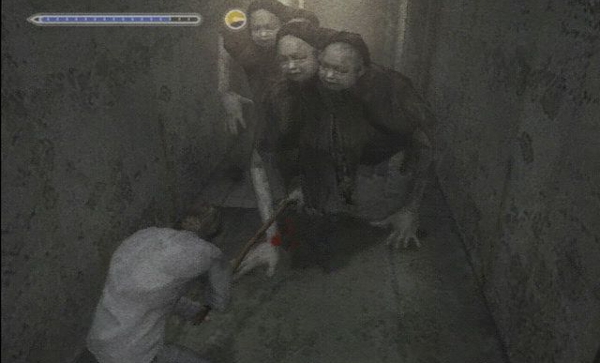 The other enemy types are also scary in their own way. There are these strange fungi that sprout from the ground. They don’t attack you, but their appearance raises many questions. At the end of their stalks is a mass that looks like a screaming face. They’re easy to destroy, but come on. Who thinks of this kind of depraved stuff? I love it, but I’m afraid for the person’s family.

Another subtle but odd enemy type in Silent Hill 4 are the wheelchairs. No, they’re not distinct looking, but they’re moving wheelchairs that chase you. Can you imagine that? Seeing a wheelchair often brings to mind the person who unfortunately must use one to get around, but for the wheelchair to start doing the moving alone, now that’s an uncomfortable thought. 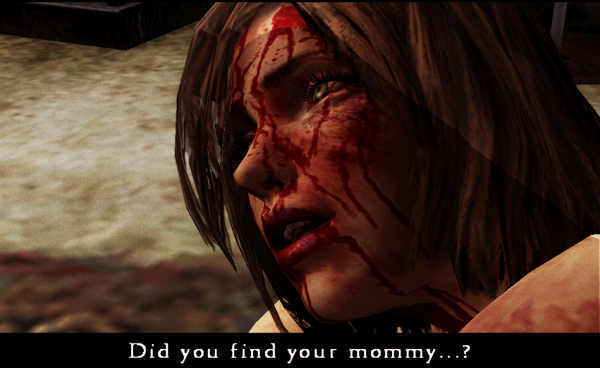 Stepping away from the enemies, I will move on to the rest of the game’s creepy aspects. Something that turns off a lot of people from Silent Hill 4 is the fact that half of the game is an escort mission. Once Henry saves Eileen from Walter, he must go through the same locations he has already been through, but with her in his wake. Escorting Eileen through these nightmares is particularly unnerving because now you must fear for her own life as well. Just like your apartment, Eileen can become possessed as well. Letting her soak up too much damage will cover her in blood and lead her to become possessed. If she’s really far gone, you have to put her on suicide watch as she starts to hit and even shoot herself.

There are very few games that genuinely scare me these days. Silent Hill 4 remains one of them. The way the game looks, the nightmare world, the story, and the feeling of helplessness permeates from Silent Hill 4. It’s a shame this game is often considered the black sheep of the original Silent Hill games. I think the premise alone made this game great. It’s the most unsettling and disturbing game in the series for me. It’s a shame a lot of people don’t see this game for the terrifying–although flawed– gem that it is. Even Konami overlooked it when they decided to do the HD Collection for the series. Hopefully more people will give this game a try, and approach it from a different perspective so they can why this game is truly, the scariest Silent Hill game.