Resident Evil Revelations was one of Capcom’s surprises for the still on-going E3 2010. And what a surprise it was, seeing as how it’s landing on the Nintendo 3DS. There is no concrete information on anything plot related other than Chris , Jill, and Hunk being set to make an appearance. We also get shots of the Resident Evil classic duo traversing through what looks like a Lost in Nightmares scenario. Then we get a shot of a ship, and series enthusiasts are instantly brought a back to Resident Evil Gaiden. The screens don’t end there though, we also get a shot of Jill holding Chris…and Chris(?) at gun point. So yeah there is some analyzing to be done, which is what I’ll be doing as I take you through the aforementioned shots complimenting them with theories as to not just what’s actually going on within the frame, but what this could mean for Revelations’ plot. So let’s start! 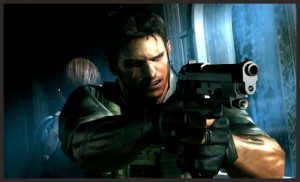 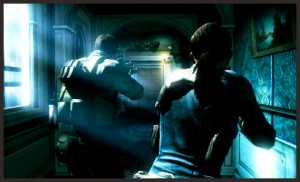 Okay the above images are pretty straightforward, Chris and Jill going through the Spencer Estate ala’ Lost in Nightmares. Now with the image that has also surfaced of a ship, many sites are claiming that the game takes place in that ship. They are all wrong, yes, maybe a certain scenario of the game may take place on the ship but in no way the whole game(more on this later). So it’s obvious that we’re once again going to get to play through the Lost in Nightmares scenario, to a certain extent as we can see in the following images. 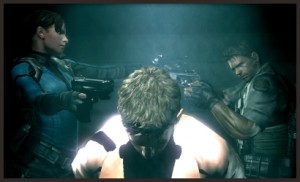 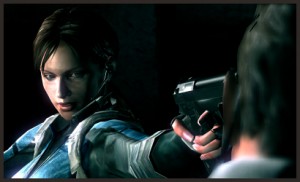 Now things get interesting, and take a “Kojima-like” twist. We see Jill holding her gun up at Chris and also at an individual sitting down probably being held captive. This damn well didn’t occur or was even hinted at during Lost in Nightmares, but then again maybe Capcom didn’t give us the whole scenario in its entirety. But that aside, this could be another mission that Jill and Chris took part in, seeing as how they’re still donning their BSAA get ups. We get the same feeling Jill invokes in these shots, WTF? So now there’s a Chris clone? I can’t comment on this just yet without anything else to go by but I am interested in where this potential plot point could go. Maybe this indicates how we’ll be playing through various missions Chris and Jill took on for the BSAA. Now let’s get on to Hunk and another potential setting for the game. 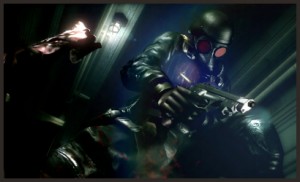 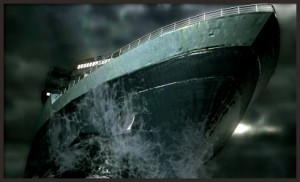 Here we see Hunk in a scene that’s kind of hard to make out, but it seems that he’s maybe going up a set of stairs in a very cramped up environment. Now here’s where the ship comes in. I firmly believe that the ship relates to what players will be experiencing when they play Hunk’s chapter of Revelations. Hunk is probably going to be assigned to retrieve a sample of some virus on board that ship for transport or maybe it has already broke out. Knowing past games, the scenario will most likely be the latter with Hunk caught in a total outbreak but it shouldn’t prove to be much of a problem having the skills he has. But still, it’ll make for quite an awesome scenario. And to further prove this, for the sake of  not just being a Resident Evil fan-boy making a crazy theory, take a look at the picture below taken from Resident Evil 4’s mercenaries mode where Hunk was playable.(sorry for the crappy quality) 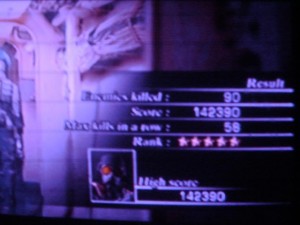 Oh yeah remember that? The shot shows Hunk standing with his back facing us on board what looks like could be the same ship seen in Revelations. Looks like we’re finally going to see what Hunk was up to while the main story was occurring. Which leads to another topic: the structure of Resident Evil Revelations.

This game might turn out to be a series of scenarios giving us insight into what was going on behind the scenes while the main events of the Resident Evil storyline were taking place. So we got Lost in Nightmares, a mysterious BSAA mission, and Hunk’s mission aboard a massive ship. Who knows what other scenarios we’ll get, but I sure am excited and totally anticipating this title.