There’s no doubt that Resident Evil 4 has changed the way we play games.  Not just Resident Evil games, but all games.  It will continue to shape the next generation of games as well.  For the better, too.

Why is that?  Why does this title stand out amongst all the others?  Why does this title still manage to stand out, given that since its release on the Nintendo Game Cube, it’s been re-released on the PC, the Playstation 2, the Nintendo Wii and even the iPhone/iPod Touch?  I’m not joking–I have the game for the iPhone.  Can’t say it’s the greatest, but…it’s Resident Evil 4!  On the iPhone!

Well, if you know RE4 in relation to the entire series, it’s no surprise.  Innovation is the key.  In a series ruled by the same control-scheme, fixed cameras and same puzzle/action gameplay ideas, the series was at risk of becoming very, very stale.

When RE4 hit the scene, it was fresh, new and exciting.  Not to mention it looked absolutely amazing.  I remember kicking myself for not having a GameCube–and I still am kicking myself. With an over-the-shoulder view, a bit of a toned-down difficulty level and a new game style, RE4 was able to unite many fans of the series with the newcomers,  Not to say that there aren’t a few of us who long for the days of the fixed camera angles and third-person perspective again. 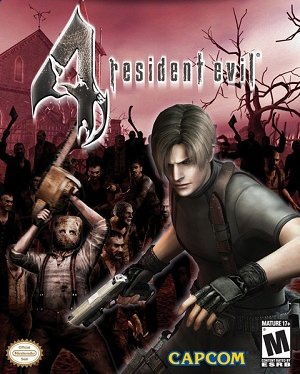 In the graphics era of the GameCube, you could almost feel blood spatter on your face.  Almost.

And don’t get me wrong, RE:4 wasn’t a cakewalk.  In terms of relative difficulty compared to the other games though, it was a bit on the light side.  While the enemies might have been tougher, the emphasis of action over puzzle elements were what opened this title up to the crowd.  Having been used to the puzzle-style play and hours of searching for the key with the head shaped like a spade, I was ready to solve when RE4 came out.  But when I discovered its linear, baddie-bashing path, it was a nice refresh.  While some might claim that it signalled the “dumbing-down” of video games, others claim that it opened video games up to a whole new audience, to keep our favourite games coming back.

The camera style that fans either love or hate was introduced to the world for the first time in this game.  Without this innovation, games like Dead Space, Gears of War and even Silent Hill: Homecoming would be and look much different.  Would they have still been released?  Probably.  Would they have still been as big of hits as they were?  Probably not.  Over-the-shoulder provides the character with an ‘almost-there’ sense of immersion.  While not on par with a first-person prospective, this camera style gives you the feeling of being closer to the action than ever before.

Additionally, some of us can’t stomach the first-person perspective (yours truly, for instance).  If the developers decided that was the route that they wanted to take, how many more fans of the series and new fans alike would have been alienated from the series?

Resident Evil 4 also marks one of the few times that a series has successfully re-created itself.  A whole new image, a whole new play style that while it may have ticked off a few people, was for the better.  It went on to sell more copies and move more systems than Nintendo ever could have hoped for.  Unfortunately, haveing been re-released over and over again for different systems is not doing it any favours.  While the PS2 and Wii versions of the game have been recieved well, the PC and iPhone versions could have used a little more polish.

RE4: Wii Edition.  Fun for the whole family!

Sadly, Resident Evil 5 is set to go down in history as The Resident Evil 4 of the PS3/Xbox 360 era.  Disappointing to say the least, especially when eager fans got their first glimpse of the trailer.  It just goes to show that you can’t quite beat the hot innovater while sticking so close to the conventions that it helped bring to the forefront of gaming, with just throwing in a few more for good measure and wrapping it all up in a pretty package.

At least of course, not without getting burned.

Sorry Sheva, you’ll forever be known to some as an Ashley clone.  But it’s not so bad, at least you get out of the way when I take aim straight for your head.