I’m going to reveal something that may come as a little bit of a shock.  But it’s something that I’ve wanted to get off of my chest for quite some time.  It’s an alright game, I tried to like it – but whenever anyone fangasms over Resident Evil 4, the only thing rolling through my mind is exasperation in an attempt to feign a similar fangasm.  Women are good at faking it, but–nevermind that analogy.

Don’t get me wrong, I’m well aware of all of the grand steps forward that RE4 helped the gaming industry make.  Revolutionary, and all that jazz.  It’s the only thing we’ve been hearing since the game’s release.  I get that.   I also happened to be of the opinion that RE4 was a pretty good game.  I didn’t necessarily fangasm over it, but other people liked it and it was cool.  I didn’t own a Nintendo Gamecube back when RE4 was released, so I had to wait for it to come to the Playstation 2.  Which it did – setting in motion a process that still, seven years later hasn’t shown signs of slowing down.

What fries me isn’t the fact that it’s been re-released so many different times; it’s that with one small exception, each re-release has been worse than the last.

The original Gamecube version was – in a word – outstanding.  It put Nintendo’s console which was already at risk of being labelled a kiddy-konsole on the addendum Christmas list of every hardcore gamer out there.  It looked better than anything we’d ever imagined possible on our television screens.  Gamecube owners beamed with pride as every other console owner begged and pleaded for a copy to call their own. 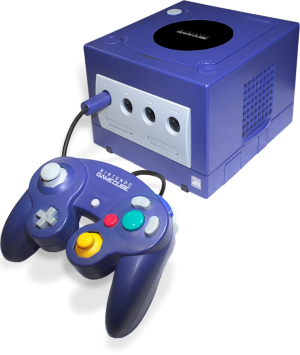 The console to own.  Too bad about the Playskool rep

Capcom, with the help of several other companies, delivered.  Less than a year later, Resident Evil 4 was released on the Playstation 2.  It had bonus content, which might have warranted the extra purchase for a few, but weaker visuals probably steered a lot of people back to their cubed console.  All was well with the world, because that PS2 copy sold like hotcakes.

Except…PC gamers were pretty pissed.  Oh the things that could be done with a PC copy of Resident Evil 4!  Once again however, they’d been given the cold shoulder by console developers.  “No big deal,” Capcom (theoretically) said, “Let’s just contract out another company and we’ll give PC gamers a taste of the good stuff.  We’ve already sold millions of copies already, what’s a few billion more?”

Their result?  In 2007 Sourcenext and Typhoon Games released a game so ‘not’- tailored to PC gamers, it felt like more of an insult to PC gamers than not having a release at all.  I’m not just referring that it was 2 years after the NGC and PS2 releases, either.  Out of the box, it only offered a few video options, a frame limiter at 60 fps and no mouse support.  What was the last PC game – that required shooting – that you played that didn’t offer mouse support?  What year was that?  What was offered were frustrating keyboard controls, blurry cutscenes with no option to adjust the settings.

Any remedies for the game to make it look or operate better than the original package were done through the dedication of modders – for free.  But it was RE4…for the PC! 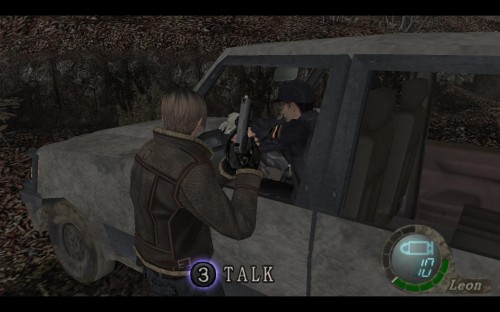 Capcom still made money off of this game, too – it’s their franchise.  Why couldn’t they have checked out what Sourcenext and Typhoon Games was doing with their most beloved of franchises?  Demanded a better quality product to release?  Alas, it slid out the door and into the machines of PC gamers regardless.

Coming off the heels of such a terrible PC port was the Wii Edition.  A complete turn-around  The innovative control scheme of the Wii not only offered motion controls – traditionalists could play with the Classic Controller or the NGC controller.  It looked marginally better than the NGC version, but that’s still better than the PS2 version and leagues ahead of the PC edition.  Wii owners who might have been coming down off of the novelty high of their console sighed in relief at the sight of a game that didn’t have a ‘Z’ at the end of the title.  RE4 for the Wii!  Awesome! 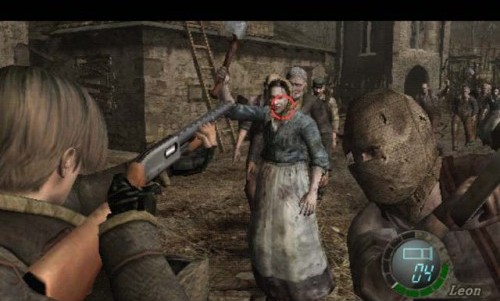 This is so much better than pretending I’m cooking…

Banking off of the high from the Wii release, Capcom set their sights on the next big gaming platform – iOS.  It was a one-two in the gut.  Biohazard 4 Mobile Edition was released for Apple’s iOS devices not once but twice.  The first time, there was no announcement – kind of a ‘boom, there it is!’ deal.  It was removed however, and replaced.  An update to the game gave it different difficulty levels and high scores.  It was Resident Evil 4 on your phone – a nice proof of concept, but how did the game play? 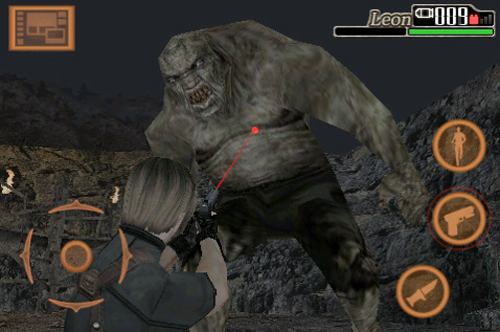 Well…about as well as you’d expect a touch-screen action game to play.  Since it was mobile, the experience isn’t the same – many levels are cut out, the graphics are scaled back…a resounding ‘meh’ from the crowd.  App store purchasers either loved it or hated it, with little in between.  But it was a nice proof of concept!  And it’s Resident Evil 4!  On your PHONE!

Since then, a Lite version has been released.  Lite is free for the basics, but $10 for the in-app purchases, which are levels, power-ups, that sort of thing.  Then the Platinum version/update is released, which is the whole shebang.  Then the iOS HD version is released, which, according to one reviewer, crashes every level.  Ouch.  However, it’s only $6.99 with an additional $0.99 for a regen item.  And it’s Resident Evil 4…on your phone…again!

That leaves us with the latest and greatest edition.  For the 15th anniversary, Capcom re-released Code Veronica X and Resident Evil 4.  In the months leading up to the release, words like ‘remastered’ and ‘remake’ were thrown around pretty loosely.  It was poised to be the definitive edition of Resident Evil, available through online services like XBL and PSN. 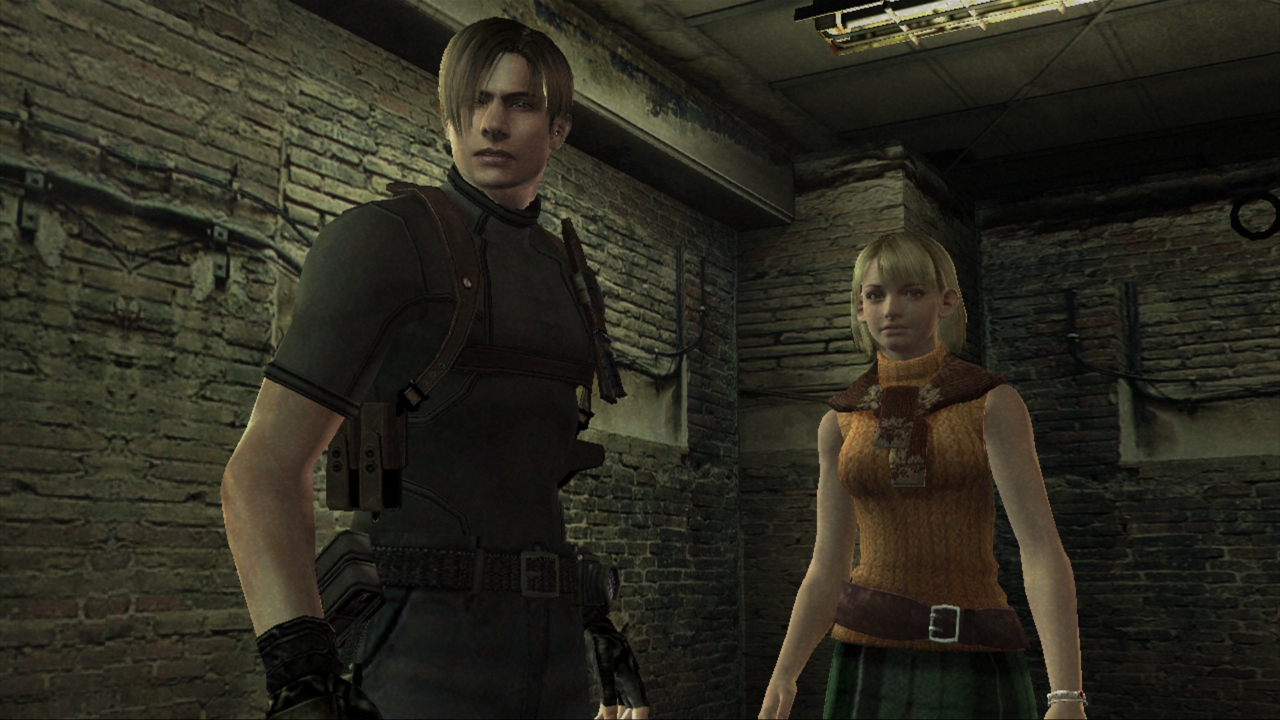 Before I begin here, we already have a review for RE4 HD.  Our Editor in Chief Jorge loved it, gave it a 10/10.  I respect his opinion and respect his review.  Take a look at if if you haven’t already.   But for the sake of the article,  I also have my own opinion about RE4 HD…

Out of respect for Jorge’s review, let me just state that I feel that Capcom could have put a lot more work into this than they did.  Seven years later with all of the  ports later, it’s the same game, with the style of gameplay with the same set-pieces and the same characters.

There are Achievements and Trophies, but Capcom seems biased against PS3 players by not offering a Platinum Trophy.  There’s no Move support despite the fact that the Wii version already exists (don’t tell me that it can’t be done because Dead Space Extraction did the switch just fine).  In fact, there’s no option to change the control scheme at all.  Why?

Additionally, there’s a bit of false-advertising in the title itself.  This isn’t HD – it’s an upscale and sometimes it looks like a quick, lazy port as many gamers may have probably already experienced.  While the official release pages on Live and PSN are absent of the word HD, we all know how this was advertised before its release.  Many reviewers praised the game for…being Resident Evil 4.  With the same set-pieces, characters and gameplay.  At what point does that stop carrying a game to high review scores?

Let’s switch this up.  If Super Mario Bros. happened to be announced tomorrow with a minor graphical update so that it didn’t make our eyes rupture in their sockets to play it on modern televisions would it still be a 10/10?

Capcom – Resident Evil is one of your most lucrative franchises with Resident Evil 4 being the most popular, best-selling game of said franchise…why is this happening?  It’s bad enough that there seems to be a re-release every time we turn around, but why has the quality of these games been in such a downward spiral?

Furthermore, how much longer is this kind of thing going to happen?  Is this what gamers want?