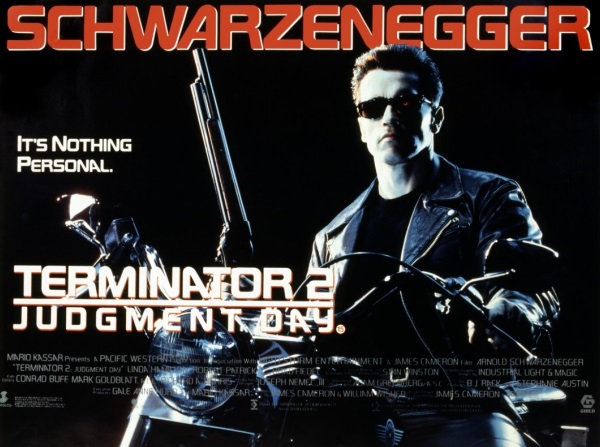 As we march closer to the release of Genisys (which actually received James Camerson’s personal seal of approval last week, calling it the “official third film” in the franchise), let’s take a look at the multi-Academy Award-winning second installment in the Terminator franchise, Terminator 2: Judgement Day. Full disclosure: this film is actually one of my favourite movies of all time, but I’ll try to refrain from fellating it nonstop during this article. Now, without further ado, here’s Terminator 2!

It’s hard for me to talk about what Terminator 2 does right without simply saying “everything,” so instead I’ll do a point-by-point rundown of what this film nails down tighter than a well-wound watch.

T2 was faced with a herculean task from the outset: to turn audience’s’ emotions regarding the titular character on their head; to change him from a ruthless, coldblooded killer meant to be feared to a fatherly figure you want to root for, and by all means they succeeded. Terminator 2’s character writing is in many ways lightyears ahead of the original, as it provides a complex dissection of the various character archetypes while at the same time plunging into uncharted narrative territory in examining the tangled web of relationships that unites the cast. Aside from the aforementioned T-800, the greatest case in point is Sarah Connor, who went from being a scrappy yet (mostly) helpless college student in the first film to a portrait of toughness and independence in the sequel, surpassing even Kyle Reese with her strength and ability. In most films she’d be portrayed as an admirable character meant to viewed in a positive light, but T2 instead shows the ugly drawbacks that would come with such a transformation; drawbacks which are normally swept under the rug. Her years spent in a mental institution combined with her distressing knowledge of the future result in Sarah being hardened to the point where she’s become almost as cold and heartless as the machines she’s fighting, perfectly illustrated by the scene in which she attempts to murder Myles Dyson to prevent Skynet from being created while decked out in sunglasses and accompanied by the Terminator’s chilling theme. Special mention must be given to Robert Patrick’s turn as the T-1000 as well, as he manages to give a more terrifying performance than Arnold himself did in the previous film while showcasing the film’s award-winning special effects. Whoever thought that a villain inspired by a hot fudge sundae (no, seriously) could remain so chilling even today? 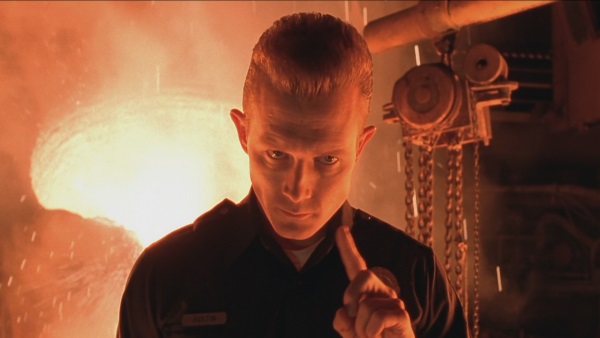 In the previous retrospective I criticized the original film’s effects for looking somewhat cheap and dated nowadays, but I’m happy to say that T2’s groundbreaking CGI (including the first use of motion capture technology in computer animation) still holds up well, and even the less-spectacular shots have an uncanny valley attribute to them that only bolsters the uneasiness factor. Of course the practical effects are more than up to snuff as well, particularly one brilliant scene that utilized several body doubles (including actress Linda Hamilton’s twin sister) and a pane of clear glass to flawless imitate a mirror image of the characters performing impromptu surgery on the T-800.

T2’s writing may seem a tad cliched to those first experiencing the film from a modern perspective, but at the time many of its plot beats and twists were downright innovative, especially the fake-out as to which Terminator is the hero and which is the villain which was tragically spoiled by the film’s marketing and due to pop cultural osmosis is very difficult to properly appreciate in this day and age. The script contains a good number of fondly-remembered and oft-repeated lines as well; though none reach the legendary status of “I’ll be back” or “Come with me if you want to live.”

One of the recurring criticisms of the first film I’ve seen is that Kyle Reese’s death is rather anticlimactic and that the character doesn’t receive the proper sendoff he deserved. The filmmakers obviously took heed of this, as the sacrifice of T2’s guardian figure, the T-800, is delivered with the perfect balance of emotion and cheesiness (i.e. the immortal thumbs-up) that allows the ending to achieve its desired bittersweet tone. In fact, the ending is so perfect that Linda Hamilton and James Cameron refused to return for the third film, citing the end of T2 as being the series’ definitive conclusion and stating that further films would do nothing but sully its impact.

Of course, every film has its flaws, and Terminator 2’s no exception. Edward Furlong’s extreme-90s-kid portrayal of John Connor can easily come across as grating to less-patient viewers, resulting in a lack of sympathy for who should be the film’s most sympathetic character. Additionally, the film has a handful of unexplainable plot holes (why did the T-1000 not kill Sarah when he had the chance in the climax instead of being uncharacteristically stupid and leaving her be?) that are detrimental to the otherwise-strong story if given too much thought, and a few of the deus-ex machina plot devices (John’s magic key card hacker, anyone?) are liable to cause some sighing and eye-rolling.

Nevertheless, Terminator 2: Judgement Day is an overall fantastic movie and one of the few sequels which, in my opinion, far exceeds its predecessor. Time will tell whether Genisys’ apparent retreads of some of T2’s plot points will prove as effective or timelessly enjoyable.

While obviously not as outright culturally significant as the first film, T2 nevertheless has received many shout-outs from various games since its release, particularly towards its memorable antagonist, the liquid metal menace T-1000. 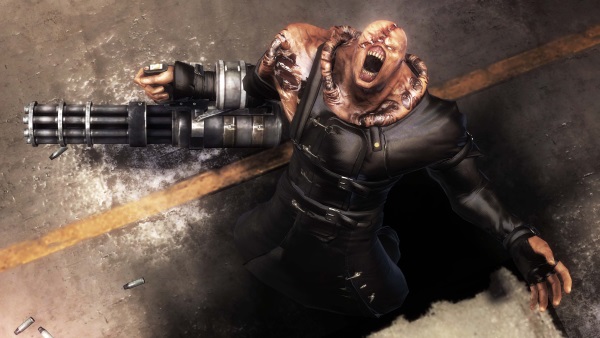 A sequence in Resident Evil 2, in which a mutated William Birkin attempts to stab the protagonists through the roof of a cable car with his claw, is a direct homage to a similar scene in T2 where the T-1000 attacks Sarah, John and the T-800 during their escape from the mental institute by stabbing them through the roof of an elevator. In addition, Resident Evil series director Shinji Mikami has admitted that Terminator 2 has served as an inspiration for several aspects of the series, including RE3’s Nemesis (whose behaviour was directly modeled after the T-1000 according to Mikami in an interview) and CODE: Veronica’s Paris Laboratory, which had both its interior and exterior based on CyberDyne Systems’ headquarters.

The T-800’s famous “hasta la vista, baby” one-liner is another one of the film’s most-referenced elements, with games as far back as the Ultima series of point-n-click games paying homage to it (via an epitaph on the grave of someone named “Arnold”) and as recent as the Final Fantasy XIII trilogy providing their own spin on the phrase (though “Hasta la vista, kupo!” is simply too adorable to find threatening).

Another gratuitous yet subtle homage comes in the form of Metal Gear Solid 2: Sons of Liberty’s entire marketing campaign, as former series director and infamous master troll Hideo Kojima claims that the fake-out of Raiden being the game’s playable character rather than Solid Snake was based on the attempted fake-out of Arnold being the heroic Terminator in T2, a reference which was furthered by the J’aimais Vu bonus mission in Metal Gear Solid V: Ground Zeroes (involving cyborg Raiden travelling back in time to protect an individual who will go on to be a major player in a future war).

Arguably my favourite reference to Terminator 2 in gaming comes from the infinitely enjoyable Far Cry: Blood Dragon, a game that’s no stranger to such easter eggs. One of the weapons available for use in the game is a lever-action shotgun called the “Galleria 1991,” and is a perfect imitation of the shotgun wielded by the T-800 during T2’s motorcycle chase sequence (even sharing the awesome flip-cock that almost broke Schwarzenegger’s finger during filming). The name of the weapon itself is a reference to both the fictional Galleria shopping mall where John first encounters the Terminators in the movie, as well as the year of the film’s release (1991).

That’s all for this week, but be sure to check back next week when we tackle the first film in the franchise not to be directed by James Cameron. As always, I’ll be back!