Last week Resident Evil fans got a good dose of excitement injected into them with the release of a new trailer, gameplay videos and screens from next year’s Resident Evil Revelations. It’s still not enough to help ease the long wait ahead of us, but hey, it’s something.

So, for this week’s installment of reHorror (now permanently set to a weekly schedule), I’m going to be breaking down Revelation’s latest, Gamescom trailer. Make sure to leave your comments in the usual place giving us your observations that I may have missed.

So, first things first: Check out the latest trailer by clicking here. 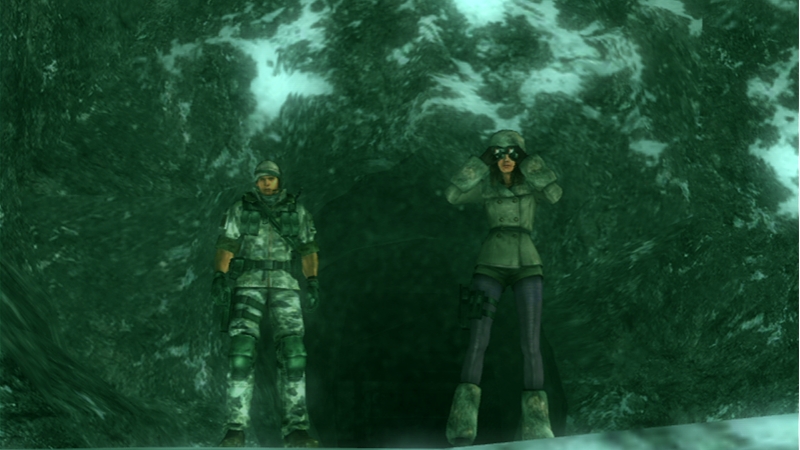 The new trailer commences with a look at series’ all-star, Chris Redfield and Jessica Sherawat who’s a new face and also a member of the BSAA (and who also wasn’t even mentioned whatsoever in Resident Evil 5). This opening scene definitely seems like a direct continuation to the one that book-ended the game’s E3 trailer.

Both BSAA operatives are seen outside a cave in a snowy mountain range which we now know is near an airport, serving as one of the hide-outs for the series’ latest organizational threat, Veltro– who we’ll learn more about momentarily. Oh, and doesn’t it seem like Jessica is a tad bit cold in that outfit of hers? 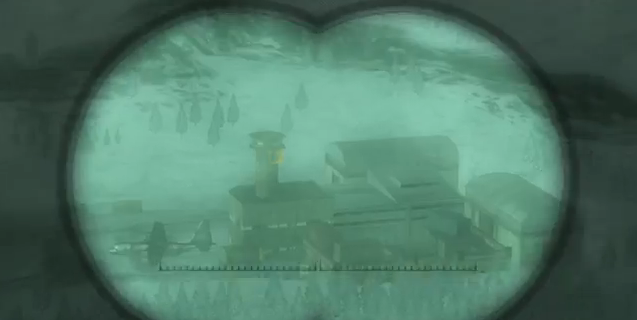 Here we have a nice shot of the airport that Veltro is using as one of their hide-outs in this mountain range. As you can see, it seems like a pretty decent-sized complex in and of itself. So, going through its corridors would definitely serve to bring back that confined sense of tension that’s been missing from the series for far too long.

Also, would it be too much to expect the complex to self-destruct, in classic Resident Evil fashion, once Chris and Jessica get all the information they need and take care of whatever BOWs may be within? Now, this may just be me, but I get a feeling there’s going to be a strong ‘Thing’ vibe throughout this particular scenario. 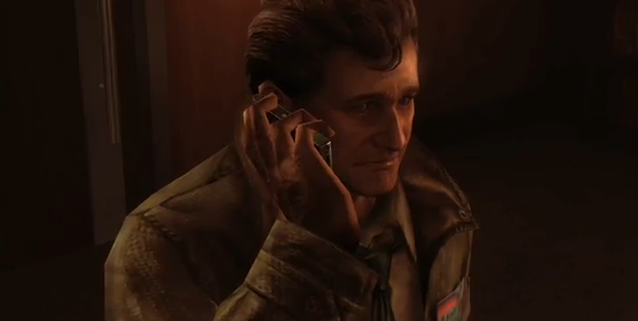 Chris and Jessica then quickly get in touch with O’Brien, who’s most likely serving as their main commander figure throughout this mission, suggesting that he has quite a notable position in the BSAA. O’Brien is notified about the Veltro crest being spotted on a tower in the airport, which, of course, doesn’t translate into ‘good news’.

Does O’Brien look like Kurt Russell to anyone else? Oh, hey! Another ‘Thing’ connection. 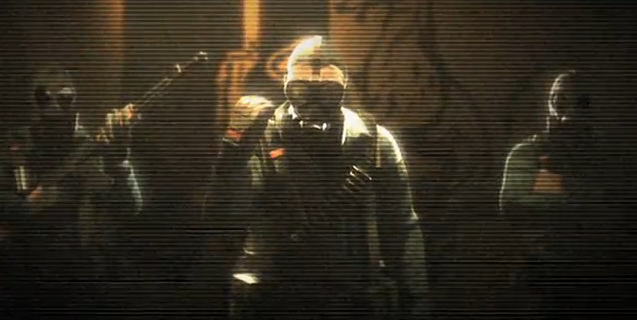 Here we have the main baddie of the game, by the looks of it. He’s still unnamed but he strongly resembles everyone’s favorite Fourth Survivor, Mr. Death himself, Hunk. Could it be him? I can’t really say, but the way he presents himself here in this all-too common form of ‘terrorist advertisement’ is quite menacing and even unsettling.

He goes on to claim him and his organization as being “messengers from the depths of the Inferno.” Sounds quite friendly, doesn’t it? Obviously, Veltro isn’t simply opting to just be a standard bio-terrorist threat. Instead, they’re putting themselves in an almost demonic position. They, of course, back this up shortly when they reveal just how they’re going to be attacking. 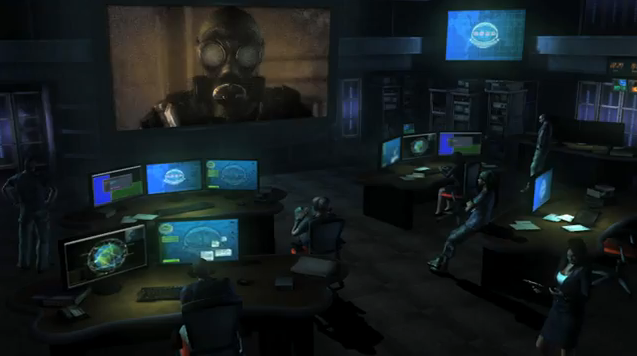 Okay, there isn’t anything too revealing in this shot, other than getting a nice view of the BSAA’s base of operations where Chris, Jessica and presumably Jill and Parker are being sent intel from. We may or may not get to meet some of these members by way of codex chats, but it’s nice to know they’re working their asses off assessing the current situation.

So, back to the main point of this image: Is that Hunnigan? It may not be automatically visible at first, but direct your eyes at the bottom right side of the image. Yeah, sure looks like Leon’s Otacon, doesn’t it? Revelations does take place after the events of Resident Evil 4, so perhaps Hunnigan has decided to devote herself to the BSAA. 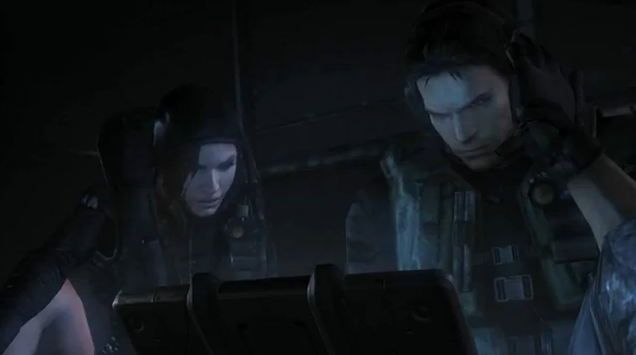 Then we shift to a scene with Chris and Jessica in a chopper, once again, a classic Resident Evil staple. Here they’re receiving the locational source of Veltro’s taped message which, according to the coordinates shown to them, is out in the sea. Yes, Veltro seems to be occupying the confines of the cruise ship we’ve seen Jill and Parker in.

Now, I’m going to put out my speculation in regards to when this actually takes place. I could somehow end up being wrong, but I’m willing to bet on this being after Chris and Jessica’s initial snowy scenario. We’ll just have to wait and see, though. Also, going back to the scene depicting Veltro’s video message, that could be the same room that Jill and Parker are seen in the E3 trailer, before they get gassed and confronted by the Hunk-looking head honcho. 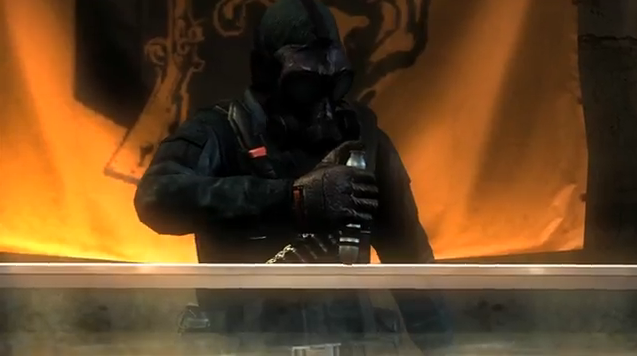 Back to Veltro’s main baddie. Here he’s seen actually backing up his previous words by showing off the new virus, T-Abyss, and its grueling affects. “Hunk” injects some poor sea creatures with T-Abyss and almost instantly we see the results. The fish changes in form and behavior, becoming extremely viscous and…uglier. The notion that “Hunk” is planning to infect a huge portion of the world’s waters with the T-Abyss virus, 1/5th to be exact, isn’t exactly very inviting, either.

We’ve recently learned about some of the enemies we’re going to be facing, thanks to the recent issue of Spanish Nintendo magazine Nintendo Accion. The publication listed piranhas and other sea creatures as being infected in the game, we also got some scans showing some of them off which you can check out by clicking here. A strong emphasis on sea creatures serving as BOWs is nice to see since the series hasn’t really had much of that to boast about. You’re going to be getting a run for your money, Mr. Neptune. 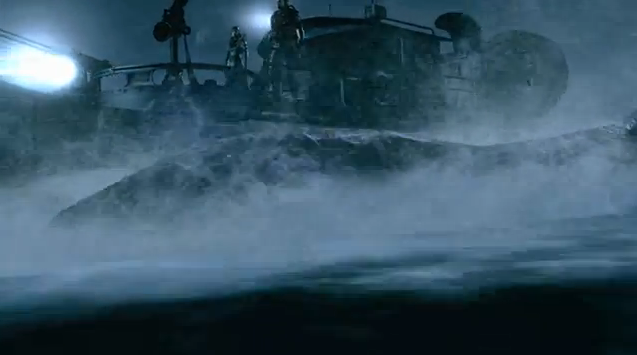 Ah, yes, boss fight time. The first thing that came to mind when I saw this was Del Lago, but after some thinking I came to the conclusion that this particular boss fight may play out like a mix of the aforementioned Resident Evil 4 boss and Resident Evil 5’s Irving boss fight thanks to Chris and Jessica’s ship being equipped with a turret. Regardless, this looks like it’ll be quite a set-piece, as Chris and Jessica are frantically trying to make it to the cruise ship.

This brings up another interesting query: What if these huge sea-creatures will also be present within the confines of the ship after bursting in? If this were to happen, which I strongly believe will be the case, it will provide even more dread and tension in the game’s underwater segments. One thing’s for certain, these new BOWs sure are a threat. 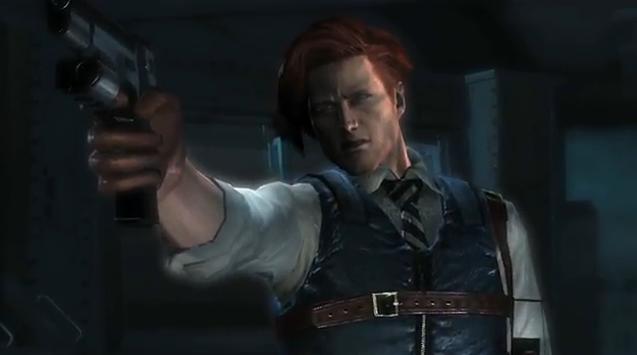 Who’s this fella’? We don’t know for sure yet, but he definitely has something against the BSAA as is suggested in this latest trailer as well as in the E3 trailer where he appears towards the end. Actually, come to think of it, this is most likely a continuation of his appearance in the game’s said E3 trailer where he comes out of nowhere, confronting both Jill and Parker. Which also served as the end of the E3 demo.

I actually asked a Capcom rep’ about this character’s identity and his overall importance to the plot that will unfold in Revelations, and I was given a rather predictable answer: “We can’t say at this time.” I was told that he’s actually going to be an important character, though. So, at least that’s something. Now, this may be way “too out there,” but I have a strong feeling that this dude will end up having some ties with Resident Evil 5’s Ricardo Irving. We’ll just have to wait and see. 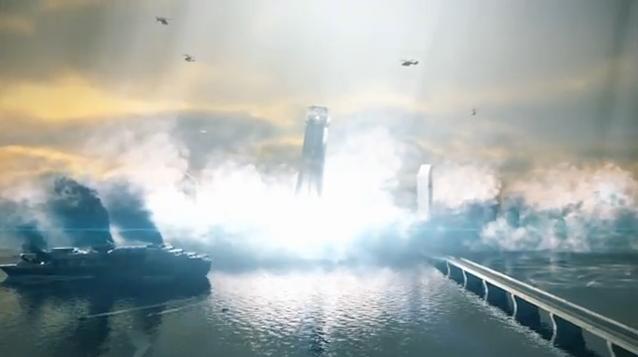 Now here’s something rather interesting. What in the blue hell is going on here? Apparently we have a huge explosion of some sort that has rocked a city, by the looks of it. What’s also rather striking is the appearance of the luxury cruise ship on the left side of the image, which we already know will serve as one of the game’s more prominent settings. We also see a lot of choppers flying overhead, surveying the destruction, most likely belonging to the BSAA.

I’m going to dive in with some very heavy speculation here. I believe that what we see here is a large attack by Veltro on a nearby city ,that happens while Jill and Chris (along with their new partners) are distracted with their current missions, where the cruise ship is also headed. Before this scene in the trailer we also get a shot of buildings crumbling down so perhaps this city may be an actual setting in the game, with it also possibly  going boom and being wiped off the face of the Earth after Veltro is defeated, so that the T-Abyss virus can’t spread any more– ala Raccoon City. This may also explain why we didn’t hear anything at all regarding this new virus in Resident Evil 5.

Terrorist attack or a move by the BSAA to stop the spread of this new viral threat? We’ll find out next year… 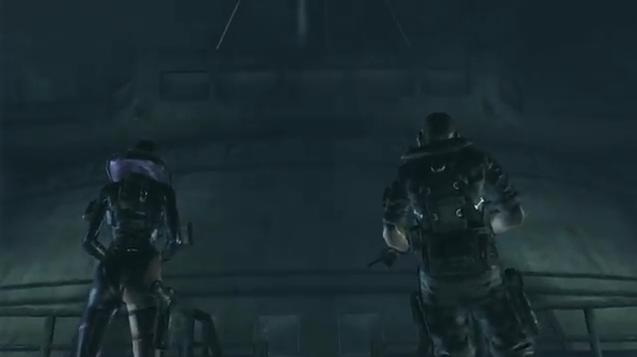 The scene then cuts to Chris and Jessica finally arriving in front of the cruise ship after the battle with the huge sea-monster from before most likely. But here’s another thought-provoking query: Is this before or after what we’ve seen of Jill and Parker in the ship? Which scenario takes place first? From all the information we have thus far, we can’t really come to a solid conclusion but we could speculate the hell out of it.

One thing’s definite: Chris and Jess’ start off in the mountain-range before getting some new intel on Veltro, in their hide-out, and getting coordinates to their location aboard the cruise ship, putting them on their next mission. What we don’t know is when Jill and Parker’s scenario takes place. Which then leads us to the final shot. 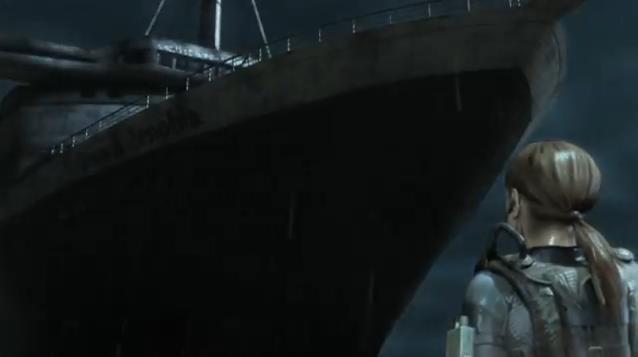 The Gamescom trailer ends with Jill, and presumably Parker off-screen, making it to the ship. Jill and Parker are sent to locate Chris, who’s signal is emitting from within the ship. Judging by these small tidbits, it would be safe to speculate that Jill and Parker’s scenario takes place after Chris and Jessica’s– in a Code Veronica type of affair, perhaps.

After making it out of the snowy mountain-range with their lives and learning more about Veltro, they use that information to face the organization in their current resting-place, aboard the cruise ship. Then, most likely, Chris gets caught and thus ends up being the man we’ve seen tied down to the chair. That’s where Jill and Parker come in, trying to get Chris out of there. But what of Jessica?

There’s many questions pouring out from this latest trailer but one thing’s for certain: Revelations is definitely shaping up to be the game Resident Evil enthusiasts have been waiting for, post-Resident Evil 5. Also, it’s quite awesome to get another entry with more than one scenario, in classic Resident Evil fashion.