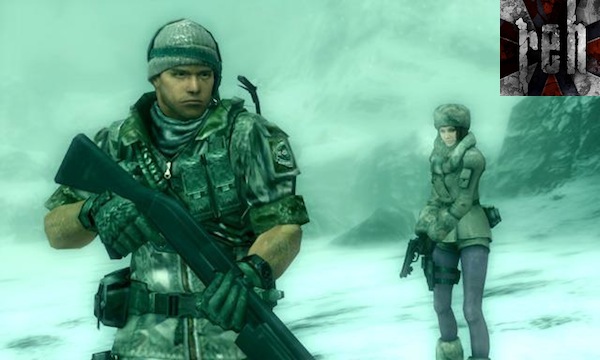 The first episode of the game did a good job of setting up the mood and planting the seeds for what would grow to be a very memorable cruise throughout the player’s time spent aboard the Queen Zenobia. The second episode kicks things off a bit differently.

While the snowy mountain featured in the first part of episode 2 still manages to be moody, and even reminiscent of The Thing (even more so thanks to the infected wolves you face), things are a little more fast-paced and more akin to Resident Evil 5-type action. And what do you know, it just so happens to feature Chris, too, along with his new partner Jessica. But don’t fret, things do go back to a slower-paced experience once the episode shifts back to Jill– in what’s definitely one of my favorite parts of the game, but we’ll get to that and the reasoning why a bit later. 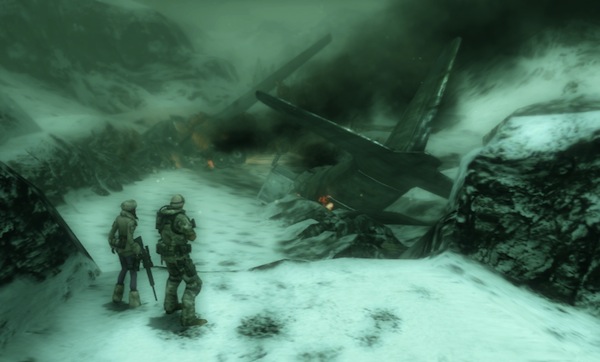 I’ll get this out of the way first. I was truly under the impression that Chris and Jessica’s storyline would have them spending a few hours of game-time in this snowy European mountain range. It ended up only amounting to this short chapter of episode 2, but the actual setting would serve as the back-drop for other scenarios in the game as well. Which I was glad about, since it is a pretty cool environment, especially in nighttime during one of the aforementioned later segments. Oh, and it becomes populated by some classic BOWs, with a flashy new ability, later on too.

The reason for Chris and Jessica being here is to find any leads on the terrorist organization Veltro’s hide-out. They were the ones behind the attack of Terragrigia, and it seems like they’re still around. Things start off with quite a bang as a carrier plane crashes in the area. Chris and Jessica go in to investigate, and they’re not alone…

After some exploring and investigating, Chris and Jessica are attacked by packs of wolves. These critters are quite relentless and love jumping right at you. They sometimes come in different sizes, too. A new type of weapon is also introduced in this chapter, one that’s very useful against the infected wolves: the BOW decoy grenades. It especially comes in handy in one very intense segment of the chapter. 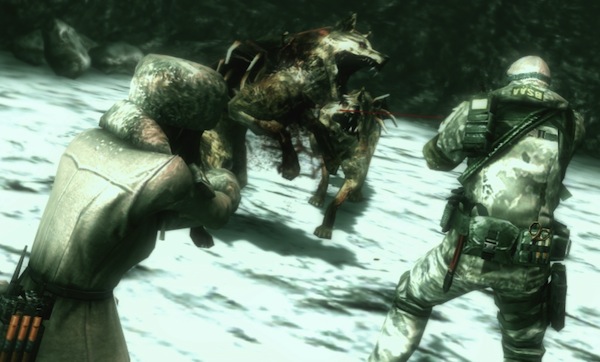 This snowy chapter was already action-packed to begin with, but once Chris falls off a ledge and becomes immobile for a few moments, things get even more intense. You’re downed, but you’re still able to shoot at incoming enemies. Being unable to move around freely is what makes this a blood-pumping set-piece. You have to wait for Jessica and her sweet ass to come to the rescue, all the while fending off hordes of wolves. Oh, and it’s even more tough in Hell mode. But those BOW decoy ‘nades are your friends! (Until they run out.)

Jessica eventually does come to the rescue, and picks Chris back up. And I must say, the dialogue between the two throughout this part of the episode was quite amusing, especially when Jessica questions Chris about Jill, and if he has the same level of trust for her. Regardless if he does or not, there’s no dodging the fact that both Chris and Jessica are about find themselves in one very messy situation, evident when O’Brian notifies them that Jill and Parker were sent to the Mediterranean on faulty intel.

This chapter did a good job of offering a change of pace, while still keeping things tense with that one set-piece moment where Chris falls and hurts his leg. And it’s this balance of the series’ traditional and more horror oriented gameplay styles that makes Revelations something special. And speaking of traditional… 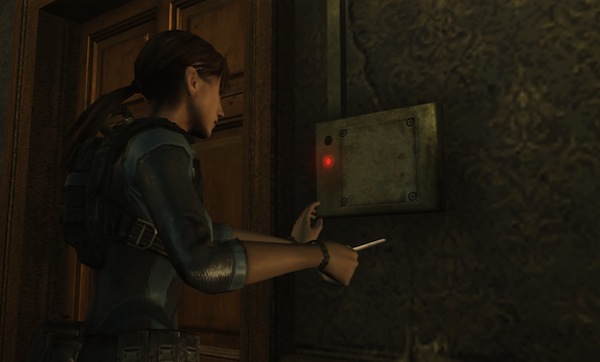 The episode then shifts back to Jill, after last episode’s big cliffhanger with the gas-masked Veltro leader. Jill and Parker ended up being taken to separate rooms on opposite ends of each other. These rooms and halls, as well as the other areas you’ll go through in this half of the episode, will really bring back memories of going through the original mansion. But it gets better. Jill is stripped of all her weapons after she wakes up, so you’re left with only the tricky-to-pull-off dodge move.

There’s been many complaints about this particular dodge move. Don’t get me wrong, it is very, very useful, and a good way to save some ammo, but it’s the execution that’s a little tough. Sometimes it just doesn’t register and you end up getting smashed across the face when you think you’re about to dodge. It’s tricky, but after some practice it should be easier to execute. I really loved how dodging the first enemy you’re faced with in this bedroom leads to him crashing his own head on the television set (that was left on with static on the screen).

Another neat thing about this first room was the puzzle that was implemented. In classic Resident Evil fashion, you had to find an item in order to proceed. In this case it was a screw driver to open up a panel to unlock the door. And guess where said screwdriver was? In the bathroom of course! Specifically in the tub, which you had to drain in order to find the item hidden (ah, memories). After that players are met with a touch-screen-based puzzle. The first one is simple enough but the later ones of this kind get mildly challenging (but not too much) as you try to line up wires with glowing orbs. But wait, doesn’t this level seem…familiar? 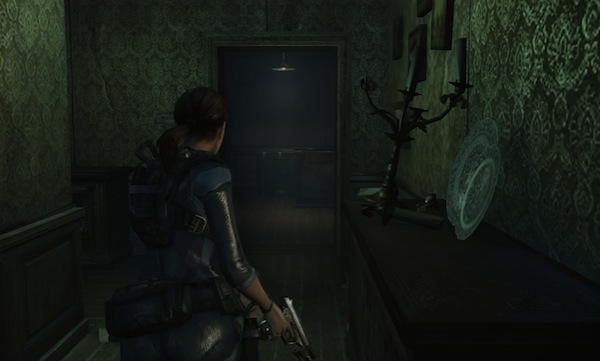 Yup, this is very similar to the demo of the game that was available on the eShop. Similar, but not exactly the same. In a pretty nice twist, Parker was placed in the room Jill was in in the demo, while Jill was in another part altogether. But then things play out the same (with the same cliffhanger ending, too, which we’ll get to in a bit). The feeling of tension as you make your way through the area with no weapons then becomes eased once you meet up with Parker and collect your stolen supplies.

Parker once again scared the crap out of me when he showed up out of nowhere after making your way through the dining room that looked very similar to the main hall from the original mansion. He does that a lot…After taking down several Ooze we’re introduced to a new variation: one with long, spikey arms waiting to cut you in two. Another thing to note is that even when set to Hell mode, this doesn’t play out exactly like the demo did in said difficulty. The enemy placement isn’t as unexpected and no, the Ooze don’t come bursting out of the elevator towards the end like they did in the demo (that moment really caught me off-gaurd and scared me shitless the first time through).

To further make this chapter a very nostalgic one, there’s even a room with a shotgun hanging on the wall, though you can’t obtain until coming back with a certain item. Yes, back-tracking! Overall, I really enjoyed the prominent feeling of helplessness throughout the weaponless sections, and just roaming through the halls and exploring the rooms knowing that you really have nothing to defend yourself with was enough to make me feel a little scared (yes, I said “scared”). And just like the first episode, this one also ends with quite a cliff hanger, one that introduces another new face. 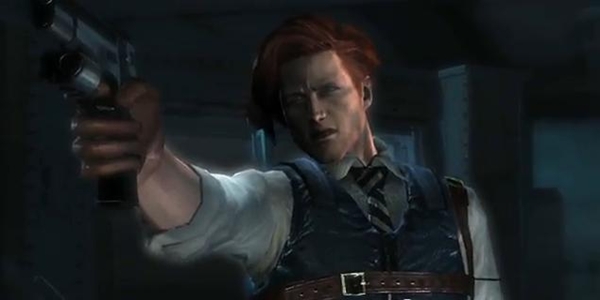 After reaching the communications room (and seeing their only way out go up in flames) Jill and Parker are confronted by a mysterious man, with a very stylish head of red hair. We later learn his identity, as well as his true role in everything that’s going on. But at this point, Raymond seems to know to something’s up. The episode ends with him shooting at Parker and Jill. Did the bullet hit anyone? We’ll find out in the next episode!

What did you think of episode 2? Did you enjoy the more actiony feeling brought about by the first part of it? What were your initial thoughts of Jessica after getting introduced to her? Sound off in the comments below!