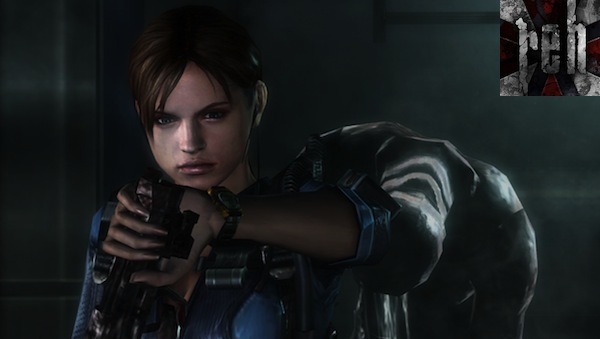 For the next few months, I’ll be focusing each new weekly edition of reHorror on one of Resident Evil Revelations’ episodes. We’ll be going in order from episode 1 all the way up to episode 12. So, yeah, there’s going to be a ton of spoilers to be found here. So be warned! Keep in mind that some weeks we may have to interrupt this to make way for trailer breakdowns and reviews.

As opposed to my previous reHorror columns, these will actually be more focused on you guys. It’s your thoughts and criticisms about each episode that will keep this feature going. Think of this is a forum of sorts, with you guys being able to discuss anuthing at all about the episode in question in the comments below. So, let’s begin, shall we? 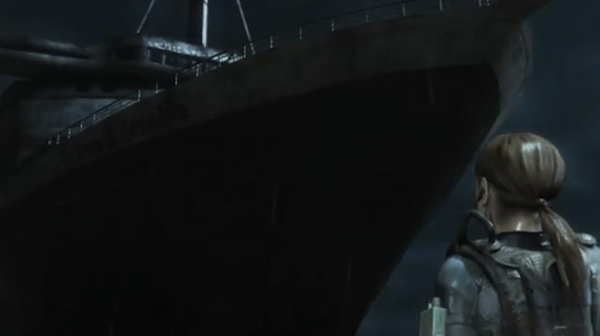 Episode 1 was one hell of an intro to what is the return to the world of survival horror for Resident Evil fans. Jill and Parker are seen making their way to the Queen Zenobia– the luxury cruise ship serving as the game’s main setting. The way they zip-line up to the ship was quite awesome, and it looked even better with the 3D slider cranked up. Their mission is to find Chris, whose last known coordinates place him aboard that very ship.

After boarding the “ghost ship” we’re already placed in a very eerie atmosphere. The wind is blowing, and the waves are crashing all around the ship (the sound of the water is just unsettling in and of itself for some reason), then there’s that bell… Jill no likey the sound of that bell. So in to the actual interior of the ship we go.

Once inside, we get some more of that creepy atmosphere. With traces of an enemy we’re soon introduced to: the Ooze. I must say, especially in Hell mode, the first Ooze you encounter was quite a bullet sponge. But really, all the Ooze you face take up quite a few bullets, it’s just that this first one seemed a bit more resistant. The lead up to this battle was quite awesome and a neat throwback to that scene from the first game where Joseph picks up a severed hand holding a gun. After that, we get the first flash-back chapter in the game. 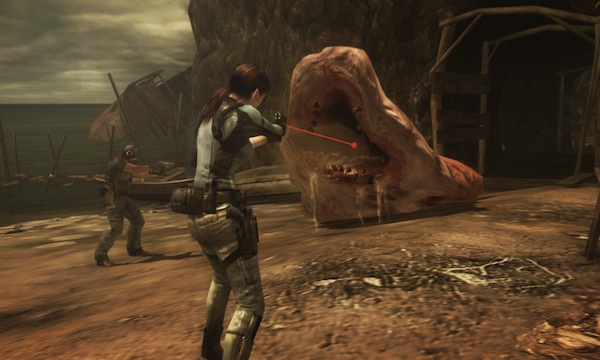 This part of the episode takes place in a beach area right near where the floating city of Terragrigia used to be. Looking out towards the sea, you can even see the remains of said city. I really enjoyed the news clip that kicked off this part, too, which gave us a breakdown of what happened to the city at the hands of the terrorist group Veltro.

This chapter serves as a tutorial level of sorts, getting players accustomed with the Genesis scanner device. You were tasked with scanning various samples of a new type of BOW. All around the level were various blobs scattered around for you to scan. Once you reached 100% on the Genesis device you were to report back to the BSAA’s commander, O’Brian to proceed with your mission. It wasn’t just a matter of scanning, though…

After scanning a couple of the blob-like creatures, they actually creep back to life. It did surprise me a bit at first since I figured they were all dead. Fighting them isn’t too hard, though, and you just had to shoot them in their mouth for the most damage. After a couple of encounters, and after reaching 100% scanning, you report back to O’Brian. He goes on to inform Jill and Parker about communications with Chris and Jessica being lost. This is where Jill and Parker get the coordinates of the Queen Zenobia ship, which is where Chris and Jessica are supposedly situated. 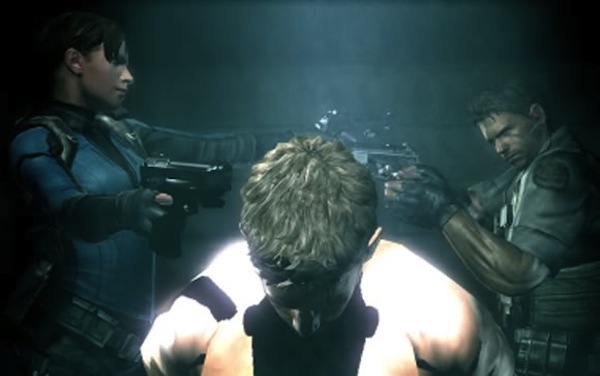 Remember the scene pictured above from the game’s debut trailer? Yeah, well, this never happens in the actual game, meaning that Capcom once again went through the traditional act of scrapping originally intended Resident Evils before putting out a final product. Like Resident Evil 1.5 and 3.5 before it, this version of Revelations (let’s call it…Resident Evil 4.25 shall we?) with all its “clone” business and HUNK-ness never got to see the light of day. But many elements seen in this initial trailer did end up sticking to the end– like Jill and Chris being central characters and the cruise ship setting. But we still had a “Chris” tied down to a chair…

After peeking into a room where “Chris” is being held, Jill is compelled to find the key to get him out of there. Little does she know that that isn’t exactly him, though. Her trek to get the key, taking players through many creepy rooms and corridors, ultimately had her come across Rachel getting her ass destroyed by a couple of Ooze. Having spectated this without attempting to save the poor girl (hey, it’s not like she could’ve done anything anyway!) will definitely come back to haunt Jill. And am I the only one that felt like Rachel should’ve had her own playable chapter? I think it would’ve been cool to play what we saw her go through in the TGS extended cut trailer.

Then Jill finds the key near Rachel’s body after taking care of the Ooze that “killed” her. She then meets up with Parker again (who scared the shit out of me when he popped up out of nowhere for some reason) and they both go on to unlock the door “Chris” is being held captive in. And guess what? It was a dummy Chris the whole time. His head falls off and excretes a gas that knocks both Jill and Parker out. The episode then ends on a very exciting note when the Veltro leader walks in, telling Jill that it’s time she learned the truth. 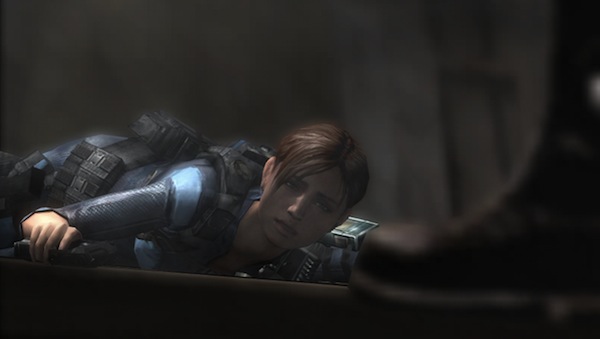 And that’s all she wrote for the game’s first episode. I found that it truly did a good job of setting up a true sense of horror quite nicely, and also getting us acquainted with the new Genesis device. We got introduced to the Ooze and got to fight them in all their wet glory, and we also got one major source of debate (the “Chris clone”) resolved without wasting any time. And if it wasn’t for Game Trailer’s video review, I would’ve been completely shocked by that particular revelation. Oh, and poor Rachel.

What did you guys think of episode 1? Did you also feel like it did a good job setting things up? Sound off with your own impressions of the episode in the comments below! Yeah, this is actually one of those posts where spoilers are welcome! Just try to keep it limited to the first episode, though.