Who doesn’t know Jill Valentine?  The smart and sexy heroine of not only the original Resident Evil, but also Resident Evil 3 – Nemesis.  If you seriously don’t know who she is, get off the Internet, and go play either of these two games.  Seriously.

Like with Claire Redfield, you probably played as Jill Valentine if you:

a) were a girl yourself
b) were a completionist
c) thought she was hot.

The first time gamers got to meet Jill Valentine, she was pointing out the burning helicopter wreckage to Chris, with “Look, Chris!”  The ensuing intro video, that was censored in several parts of the world, because it was just so…awful; it’s something we really don’t like to bring up.  Prepare to enter the world of survival horror indeed.

At first, Jill works with Barry Burton to find Chris Redfield, who had been separated from the rest of the S.T.A.R.S. team on their way into the mansion.  You also can’t get through a discussion on Resident Evil without the inclusion of some of the most memorable sound-bytes in video game history.

The back story of Jill states that she was also in the U.S. Army’s Delta Force training program.  She apparently is extremely well acquainted with bombs in addition to being The Master of Unlocking.  Specifically with their disposal…interesting.  So far as we can currently remember (at the time of writing this article) there has never been any mention of this in any other of the games.  Apparently, she’s forgotten all of her training – we’re guessing that the beginnings of the zombie apocalypse will do that to you.

Chris, Jill and Barry and Rebecca made their way through the Spencer Estate and the secret labs.  Uncovering Wesker as a traitor and in general, just a horrible leader, they each devoted the rest of their lives to make his a living hell.  Barry relocated his family to Canada for free health care, Chris departed for Europe, and Jill stayed in Raccoon to investigate the whereabouts of Umbrella’s underground facility and to conveniently star in Resident Evil: Nemesis.

S.T.A.R.S. attempted for two months to convince Raccoon Police Chief Brian Irons to do something about Umbrella, but despite the reports, they were pretty much blown off with a collective “meh,” from the entire town.

At the beginning of Nemesis, Jill is making her last escape from the city.  In her escape, she runs across Chicken Liver Brad Vickers, the pilot who abandoned them in the Arklay Mountains.  Brad was bitten by a zombie directly in front of her, but still has time to warn her of some mystery BOW that’s been hunting him and other S.T.A.R.S. officers down.

Instead of sticking around with Brad, Jill makes her way to the police station, where she runs into him yet again – and that thing that he was talking about. 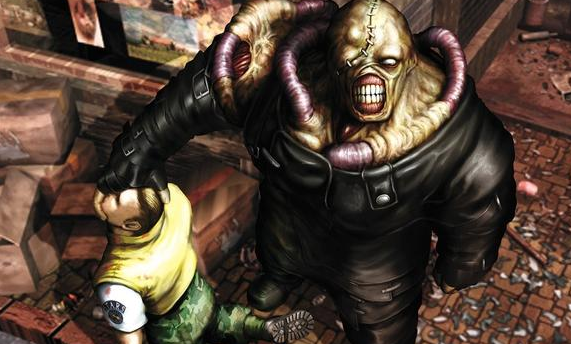 This must have been shortly after, or in an alternate universe.  Or, poor Brad must have just grown a new head and gone on to terrorize Claire Redfield as she made her way into the Police Station.  Nemesis on the other hand relentlessly hunted Jill down through the police station, tearing down walls and busting through doors, angrily screaming S.T.A.R.S!! whenever he showed up.

In her escape from the city, Jill happened upon Carlos Olivera, a mercenary with the Umbrella Biohazard Countermeasure Service.  Carlos isn’t just a pretty, flirtatious face though. He helps Jill when she needs him most – namely when she becomes infected with the T-virus.  A plot point that later comes back to haunt poor Jill.

Eventually Jill does escape Raccoon City before it’s permanently destroyed.   Her, Barry and Carlos fly out of Raccoon just in time to see it be demolished by a nuclear missile.  They continue their anti-Umbrella work until Umbrella’s stock eventually plummets, and the company is forced to close.

When we meet up with Jill again, the year is 2003.  She’s partnered again with Chris, and the two of them are infiltrating an Umbrella facility in Russia.  As is the usual with their missions, those two seem to be the only members of their squad (or perhaps the entire mission) skilled enough to come out alive in the end.

And of course, as is the usual, our favourite duo knows that this definitely isn’t the end of Umbrella.

Come 2006, a “reliable” source tipped off the BSAA of the whereabouts of Ozwell E. Spencer, Umbrella’s founder.  Certainly by now the guy is getting up there, on the verge of kicking it.  And he does, at the hands of someone even more dangerous. 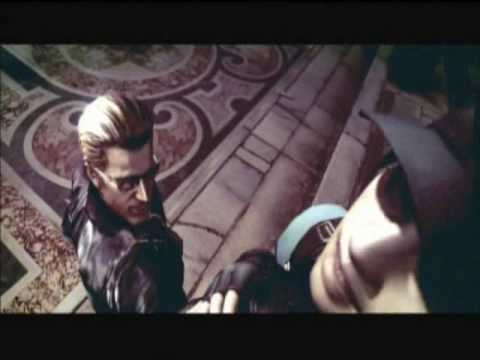 Don’t mess around on a guy in shades.  EVER.

Anyone who’s played Resident Evil 5, or even seen an advertisement for it, knows what happens next.  Chris and Jill were really no match for their old arch rival.  Wesker’s like what, 50 by now?  He still makes quick work of the two of them destroying Spencer’s study in the process.

The Resident Evil Universe never kills its S.T.A.R.S (or at least the ones that matter…) so the fact that Jill wasn’t dead shouldn’t have come as a surprise to anyone, but what really happened after Wesker and Jill plummeted out of the window? Resident Evil 5 never really addressed this.  What can be found however is in The Art of Resident Evil 5 – a book taking a look at unused concepts for the game.  It states that Wesker found Jill’s body at the foot of the cliff, having survived the fall himself, losing only an eye.  Instead of leaving her body there, he keeps her to use as a tease for Chris.  However he soon finds a much more useful purpose for Jill rather than just to torture his former nemesis.

If you recall, Jill was infected with the T-virus, but she received the antidote.  The antidote only caused the T-Virus to remain dormant however – and just like when you don’t take all of your antibiotics, the T-virus infection was still in her. While Wesker held her in a cryogenic state, her body’s immune system developed its own defense to the T-Virus.  Those antibodies would be then be used by Wesker to help further his research.  Jill unwittingly provided antibodies to make the Urobroros virus a little less…deadly, and allow it to be tested on humans.

How ironic?  Jill spent her entire adult life fighting bio-terrorism, now she was a contributing factor in what would have (and really could have been) the deadliest virus to plague the earth.

So obviously during that time, Wesker must have dyed her hair and done something weird with her nose, right?  Well, due to the testing she endured, she suffered some side-effects.  Namely, she lost all of her pigment.  In addition to losing her colour, Jill also gained super-human strength.  And conveniently enough, became highly susceptible to mind control.

An effective way to constantly administer the Progenitor Virus mix (P30 – part of the experiments) to her was through a device on her chest.  Could have attached it anywhere else on her body, but the chest provided…y’know what?  It went with the suit.

In what was probably the worst kept secret Resident Evil 5 had to offer, Jill donned a plague mask and began doing Wesker’s bidding.  She kept a careful eye on Ricardo Irving, making sure that his fuck-ups weren’t too grand, and was there to make Chris and Sheva’s first battle against Wesker all the more…irritating.

But of course, Chris came to save the day!  After Jill was thinking for herself again, she made her “Desperate Escape” with Josh Stone.  The two of them commandeer a helicopter and rush in just in time to save Chris and Sheva from a volcano.

Of course, Jill should have been right there beside Chris the entire time!  She would have given her life for him and out of nowhere comes this Sheva broad?  Come on, they’re ‘partners!’ and clearly that means a lot more than ‘they work together.’

It seems that the powers that be seem to want to shoe-horn a bit of a romantic subplot into all of their games.  Chris and Jill, Leon and Ada (or to a lesser extent, Claire), Steve and Claire, Rebecca and Billy (meh…), Wesker and Excella.  Despite the fact that these guys are probably suffering from some horrible PTSD and are probably a real downer to even be around (remember the promotional advertisements for RE5?), fans do seem to eat this kind of thing up.  And so long as the fans enjoy it, you can expect to see more of it in the future.

Jill is slated to show up in Resident Evil: Revelations.  She’s shown up in numerous other Capcom games, including Marvel vs. Capcom 3 and is also appearing in Resident Evil: The Mercenaries 3D.  We’re sure that gamers everywhere are  ready to see her in 3D.