IGN has just released a load of new gameplay videos from their time with Resident Evil Revelations, which is set to launch on February 7, which isn’t really all that far from now. With the new pieces of footage we get to see many different aspects of the game in action: from the stunning, and creepy, atmosphere to the unsettling Ooze and classic Hunters, with even a boss battle being shown off. It’s clear that this is definitely set to be one of the best 3DS games next year, and when all’s said and done, it could end up residing beside the very best of the Resident Evil series as well. 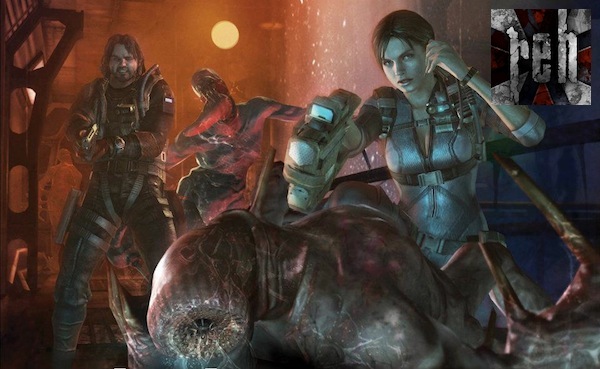 This first video does a good job of getting one crucial point across: the atmosphere in Revelations is going to be truly significant, and testament to Capcom’s aim to bring fans, and new players alike, back into the world of survival horror. Oh, and you also get to hear Parker’s manly voice in the background.

This next video continues to showcase the game’s beautiful, almost console-like, visuals. This is definitely one of the, if not the absolute, best-looking game to ever grace the 3DS. And we shouldn’t be surprised by that, since with each main Resident Evil entry, Capcom always pushes the graphical capabilities of whatever platform they’re developing on to the limit.

The Clock Room area we see here is truly stunning, and it serves as a hub area of sorts, which you’ll be revisiting multiple times in order to get to new areas in the ship. Yes, as if you needed more proof: backtracking’s back!

On to the next video. This one continues to impress us with some very attractive visuals, with neat little atmospheric effects like a cold draft coming from outside a shattered window. We also get to see Jill utilize the Genesis scanner, which is an item that’s going to prove to be quite vital throughout the experience.

Oh, boy. I sure can’t wait to traverse this casino! Looks like I was right on the money when I speculated that Jill and Parker were in some sort of game room before. I find it quite nice for an area like this to be included, since it brings forth some color to what’s otherwise a rather dark atmosphere. And as Parker boldly states, this is a luxury ship, so perhaps there’ll be more fancy areas like this one.

Ah, yes, the dining room. It’s an area that’s a classic series staple in and of itself, so it’s truly satisfying to see it part of the game’s luxury cruise ship (and it makes sense, too, I mean…those people had to eat somewhere, right?). I’m also quite impressed by the neat fog effects in this particular area, as it gives it a much more eerie look. Oh, and did anyone else notice how Jill wasn’t carrying a gun? Also, she wasn’t able to pick up any ammo. Now, I may be looking a bit too much into this (and she’s just carrying the maximum capacity of ammunition) but perhaps players will be pit in some form of scenario that strips them of their weapons.

Don’t do it, Jill! Talk about disturbing. If this particular section of the game is indicative of the overall sense of horror that entire game will have, then, man, are we all in for one hell of a nightmare! The voice-acting in the series has never quite been labeled as masterful. Most of the time, everyone deems the acting as cheesy, but whoever voiced this particular “survivor” truly did a good job. I’m pretty sure we all know what happens next…

Come on, give Jill a break. What else do you expect her to do with a pile of dirty clothes? Of course she has to go to the laundry! In all seriousness, taking the Ooze and their ability to travel through water into consideration, this room should definitely play host to a pop-out scare or two from our favorite slimy foes. And we see one such instance in this video. Was anyone else expecting one of Dead Space 2’s child necromorphs to pop out of one of the machines?

Yes, you definitely should have worn your thermal underwear, Jessica. I mean, you are wearing underwear, right? Here we see a bit of Chris’ side of Revelations’ sprawling story, specifically his snowy scenario. Does the structure of this area remind any of Resident Evil 5’s own mine area (sans the snow, of course)? And one of Jessica’s remarks made me think of something rather amusing: infected chihuahuas, anyone? Also, once again we get more talk of Veltro and them seemingly resurrecting from the dead. Like I speculated before, I’m sure the FBC had something to do with Veltro’s “downfall” and perhaps Morgan is covering them up behind-the-scenes. But we’ll have to wait and see how it all plays out.

As if the regular, humanoid Ooze weren’t enough, now poor Jill has to contend with some fishy foes as well. We’ve known for a while that we would, in fact, be facing swimming monstrosities in some flooded areas, but it’s always nice to see confrontations with these enemies in action for ourselves instead of just reading about them. Looks like you’re going to have to go through this area with as much patience as you have courage. These T-Abyss infected sea creatures don’t seem like they’re playing around. Another reason why the game’s definitely going to be full of thrills.

Now we’re back to the guy who was calling out for help before. He happened to be the former Comms officer in the ship, and as we can see now…he’s…um…not himself anymore. The creature truly has a grotesque design and I’m completely digging it. His human head is sort of still there, too, making the creature a bit more creepy. His screams don’t help, too. After seeing so many of the standard Ooze, it’s quite satisfying to see that the game won’t be lacking in enemy variety, especially when it comes to the bosses.

This isn’t exactly a new piece of footage, but it’s still exciting to see once again. Rachel’s just been killd by a group of Ooze, with Jill just watching the events unfold in front of her. As we now know, Rachel ends up becoming one of the creatues, in what will most likely be a tense boss battle. Girl on girl action!

Here’s the second part of the boss battle with the now mutated former Comms officer. Again, I love just how disturbing his design is. We get to see Jill employ some close quarters attacks on the foe, with kicks not unlike those that are performed by Chris and Leon in Resident Evils 5 and 4, respectively. It looks like the way to beat this particular boss is by shooting the red explosive canisters. Pretty logical, right? But I’m sure us veteran players will be able to bring down the beast by just using our regular guns.

The final video showcases a run-in with a group of Ooze. We’ve seen a lot of them already, by way of screens, trailers, and gameplay footage, but still, these enemies look like they’re going to be just as formidable if not more than the classic zombies. Speaking of which, IGN also stated that through the entirety of their extended preview of the game, they’ve yet to run into said classic foes. So, perhaps they’re being saved as a late-game surprise, or maybe they are truly omitted from the series’ return-to-form title.

Here we have a nice little look at both Quint and Keith, two other BSAA operatives also on the mission against Veltro. They’re tasked with storming an underground Veltro stronghold, and they’re going about it with a good sense of humor after having received their orders from O’Brian. It’s quite clear that these two are going to provide the comic relief in the game, and honestly, I’m quite glad we’re getting a pair of funny characters to help ease the tension. Oh, and Jessica has a stalker…

Now this is one part I’m just dying to play (but really, I’m dying to play the whole game…). Here we have Veltro’s attack on Terragrigia from the perspectives of two former FBC members, Parker and Jessica. Yeah, this is what they had to go through before they opted to join up with the BSAA. That’s a lot of Hunters! If you read the latest issue of Game Informer then you know that this particular scenario will have both characters, with Parker being the playable one, going up against hordes of relentless Hunters as players fight their way up a building to make it to the helipad. You know, before the entire city goes boom– an act done by none other than the FBC themselves who decide that it’s best to utilize the very same satellite device that’s holding the city up on itself, to prevent a complete biohazard outbreak.

And we have more of our favorite mean, green machines! These guys truly come in large numbers here, but I’ve also noticed something else: they’re not as quick. I mean, don’t get me wrong, a horde of Hunters provides more danger than one should be met with, but still, I feel like they were much more quick with fatal strikes in their previous appearances. But maybe that’s just me. Regardless, this “prequel” mission of sorts definitely looks like it’s going to be one hell of a set-piece moment.

Well there you have it! IGN will continue to have more features on Resident Evil Revelations in the days to come, so we’ll still be busy covering whatever new videos they bring forth. But for now, I hope you enjoy all the ones that are available, which as you can see, is a lot. But come on, we can never get enough of Revelations media!