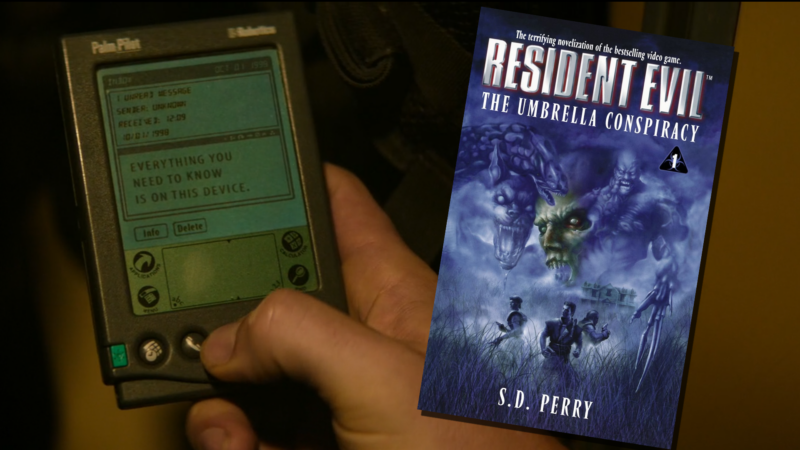 There was a lot of emphasis put on Resident Evil: Welcome to Raccoon City‘s faithfulness to the games in marketing, which stirred up quite a bit of hype around the film. Sadly, it turned out that’s only sorta-kinda true. While it does follow the general gist of those two stories (hitting bullet points despite completely recontextualizing them) and recreates a few locations, the majority of the story was entirely new and simply danced around moments and characters from the first two Resident Evil games. One source of inspiration that took me by complete surprise, however, was the film pulling ideas from the 1998 novel Resident Evil: The Umbrella Conspiracy, by S.D. Perry.

If you’re unfamiliar, the first three games (along with Code: Veronica and Resident Evil Zero) were adapted into a series of novels in the late 90s-early-00s by science fiction author S.D. Perry, and they’re actually pretty great. While not 100% accurate (due to issues I’ll explain in the next paragraph), the books managed to be a really good series of adaptions that fleshed out the characters and world of Resident Evil in a way that simply wasn’t possible in the games at the time. For pre-internet fans these books were like bibles as well, covering files and documents and listing character names and locations found in-game in a handy paperback. If you were creating your own Resident Evil fan fiction (or comics) or were just a lore geek back in the day, you absolutely could not skip these.

Like I said, though — there were a few hitches along the way that caused them to be a bit whacky when it came to consistency (both with the games as well as the novels themselves) as Capcom reportedly provided very little feedback on them, and the author was often forced to simply make things up in order to fill in gaps Capcom hadn’t provided her with. Along with that, a lot of established canon wasn’t set in stone at the time, such as Jill’s military background (replaced with a history as an ex-cat burglar as an explanation for her lock picking skills) or S.T.A.R.S. being a branch of the R.P.D. (the novels follow the 1996 instruction manual’s explanation that they were a government operation simply occupying Raccoon for the sake of the investigation). They can get pretty wild in a few places, but you kinda just have to set aside your knowledge of the modern lore while reading, since the majority of it simply didn’t exist at the time.

But what does all this have to do with WTRC? Well, kinda everything, actually. Major spoilers for Resident Evil: Welcome to Raccoon City from here on out.

Early on in the film, S.T.A.R.S. member Albert Wesker finds a mysterious PDA (a sort of pre-smartphone pocket computer from the 90s) in his locker, which contains a series of directions and maps that will help him complete his mission as ordered by The Organization (presumably). Believe it or not, this wasn’t something just made up by writer/director Johannes Roberts, but lifted directly from The Umbrella Conspiracy. In that novel, it’s Jill, rather than Wesker, who receives a PDA (erroneously referred to as a mini-disc reader, even though that type of technology wasn’t capable of what the device is described as performing) while gearing up for the mission in the R.P.D. locker room. Unlike the film, Jill doesn’t simply find it in her personal locker, however, it’s instead handed to her by a novel-exclusive character named Trent. 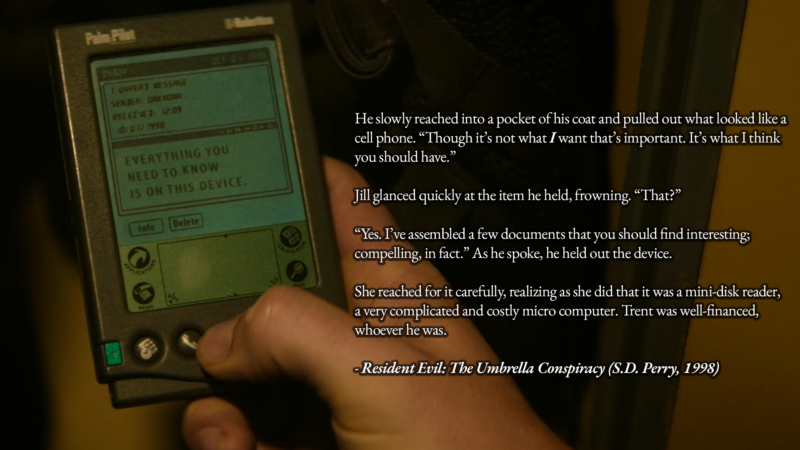 Jill is instructed to keep the device, and the information on it, hidden from her fellow S.T.A.R.S. members in the novel, while in the film Wesker does so to keep his cover as a double agent intact. In both the novel and the film, Jill and Wesker keep the PDA hidden from view until they need to use it.

Once reaching the mansion, both Jill and Wesker discover directions on how to solve puzzles and escape the mansion, with Jill’s version listing off necessary key items and documents, and Wesker’s giving him instructions on how to play Moonlight Sonata to open the secret passage (something the novel version of Rebecca Chambers intuits on her own while messing around with the piano).

Another important cross-over is the PDA’s use as a map, which is virtually identical between both adaptions. Wesker follows along a strict path (a vague reconstruction of the mansion’s first floor eastern wing, modified to account for the new locations in the film) directing him straight to the library/bar where he finds the piano. Jill doesn’t have as specific a goal and instead uses it as a way to make exploration in the labyrinthine mansion at least a smidge easier. It’s also what helps her know for sure that the mansion is at the center of the cannibal killings, rather than just pure happenstance. 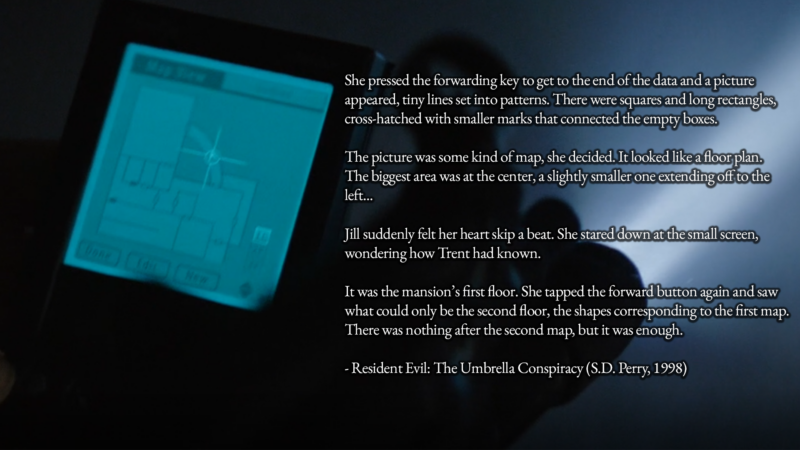 This is more or less where the inspiration from the novel stops, but it’s still very neat to see such a deep cut make it to the silver screen. The other films arguably pulled from the novels as well, with 2012’s Resident Evil: Retribution‘s setting being eerily similar to that of the fourth novel, Resident Evil: Underworld, but it isn’t quite as direct an adaption as this. It’s also worth mentioning that WTRC‘s treatment of the Spencer mansion as having been abandoned since Umbrella founder Spencer’s death is somewhat similar to the novel’s use of the mansion being abandoned after George Trevor’s “disappearance”. In the games, S.T.A.R.S. doesn’t appear to have been familiar with the Spencer mansion at all, so it is a connection between the two adaptions, intentional or not.

While Resident Evil: Welcome to Raccoon City might not be perfect (I did still enjoy it for the most part, though), it’s still very cool to see how deep some of the roots for its inspiration went. As a fan of the S.D. Perry novels and the old school American version of the series (where so much lore was mistranslated and/or completely made up), it’s cool as shit to experience even just one more sliver of that era one last time.