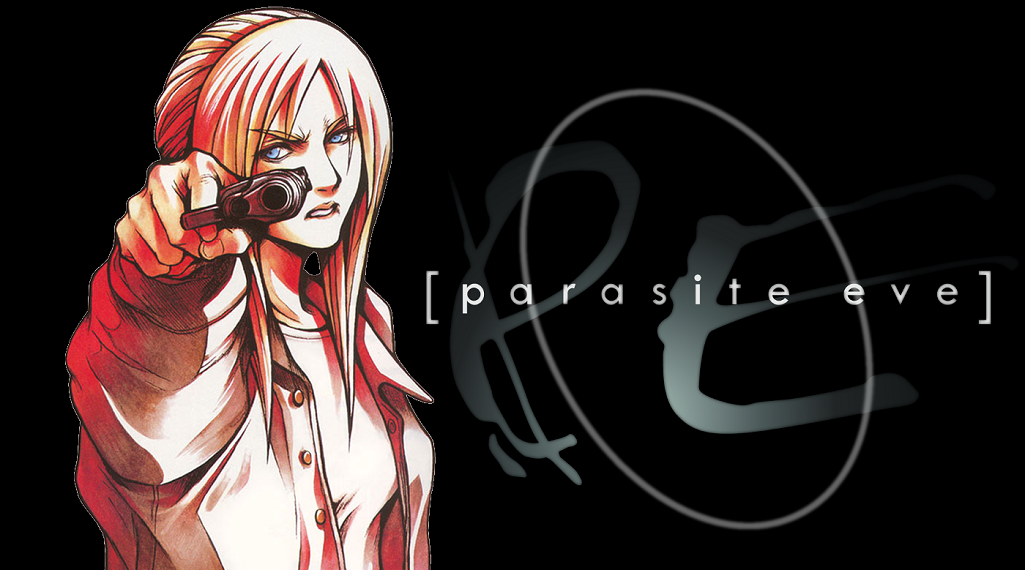 In the 90s Resident Evil and Final Fantasy were pivotal in the original PlayStation’s rise as an industry leader. Both were part of Sony’s marketing push to offer a more “mature” console in contrast to Nintendo’s family friendly hardware. Resident Evil was the bleak horror game that taught a mass audience that videogames could be scary, while Final Fantasy VII was the role-playing epic that enticed the masses with its storytelling. Both franchises had very different aspirations in the sort of emotions they wanted to elicit from their audience, but it was only a matter of time before someone tried to combine the two nonetheless. In 1998, several of the creative minds behind Final Fantasy did just that with the release Parasite Eve.

The idea of a survival horror RPG is an interesting concept, but I was always apprehensive to actually giving Parasite Eve a playthrough. To me the genre expectations for RPGs and traditional survival horror games are in too stark contrast, at least in what I respectively enjoy about them both. Theorycrafting, character builds, and spending copious amounts of time in battle making your characters more powerful is a big part of an RPG’s appeal. While survival horror is about reduction and limiting the player’s resources, making you feel vulnerable and afraid in every combat engagement. Basically, empowerment is a big part of RPGs, while disempowerment is a big part of survival horror. I honestly didn’t think the two could be balanced well, and it wasn’t until I played Parasite Eve for myself that I learned how wrong I was on that.

Part of what sets Parasite Eve apart from many other survival horror games of its time is the creative minds around it, and how they approach game design. It was directed by Takashi Tokita, produced by Hironobu Sakaguchi, character designs by Tetsuya Nomura, and composed by Yoko Shimomura. If you’re familiar with Japanese RPGs in the slightest, then most of these names should sound familiar. Basically the minds behind Final Fantasy, Chrono Trigger, and later titles like Kingdom Hearts came together to create their own take on Resident Evil. 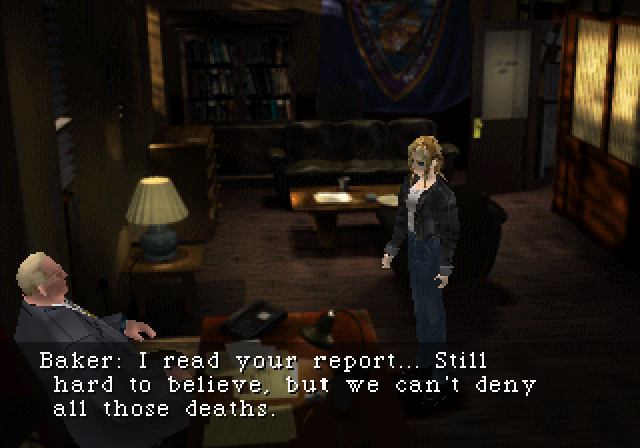 The original Resident Evil and many subsequent imitators like to build tension through resource management. The fear in those games comes from the fact that if you get into a scuffle with several zombies, you run the gambit of either using either ammo to protect yourself or healing items to restore your health if you take damage. In either case you’re using precious limited resources, and you need to weigh each dangerous encounter carefully lest you run yourself dry. Parasite Eve however really isn’t like that, as both ammunition and healing items can be acquired as a random drop at the end of a fight. The game encourages battle for gain, which is a big juxtaposition to how Resident Evil handled enemy encounters.

Parasite Eve builds tension in through a different means: by using a more evolved combat system than what’s typically seen in traditional survival horror games. Positioning on the battlefield is key in this game, the farther away from an enemy you are the less damage you do, and the closer you are the more damage you do. It creates a risk vs reward aspect to combat that’ll have you second guessing your choices often. If you try to fight from a distance you’re less likely to get hit with an enemy attack, but you also increase your chances of missing the target and doing far less damage, prolonging the fight. Whereas close range battles will up your damage and reduce the chance to miss, but you’re more likely to get hit by enemy attacks.

Parasite Eve cleverly lifts the “Active Time Battle” system (ATB for short) from Final Fantasy. Basically, there’s a gauge in combat that needs to refill before you can attack, use items, or abilities. It forces the player to pick their actions very carefully. Enemies move around the map quite a bit, and as your ATB gauge refills, you need to move your character around and respond accordingly. An enemy could be a fair distance off, so you choose to attack with your pistol, but you don’t do quite enough damage to finish them off, then they dart at you and kill you before you get the chance to heal. There’s a lot of tension in the combat system that works fits into the survival horror mold well. 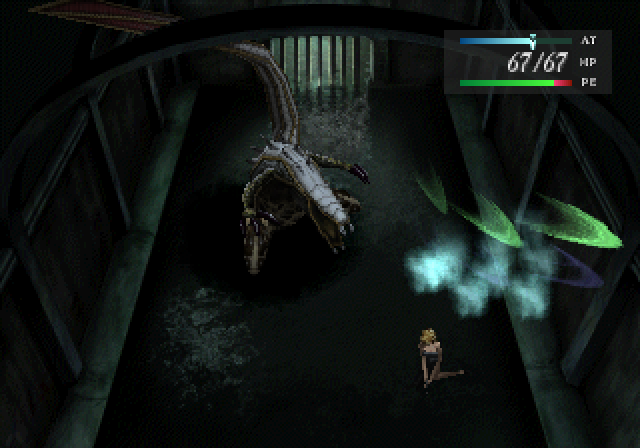 There’s also parasite energy, which allows you to use special abilities in the game. What makes me grin about the special abilities in Parasite Eve is that most of them are pulled wholesale from Squaresoft’s playbook; Heal 1, Heal 2, Slow, Confuse, Haste, and Barrier are instantly recognizable if you’re a Final Fantasy fan. While these sorts of abilities may sound a bit overpowered to use in a traditional survival horror game, they’re balanced well in this game. Special abilities tend to eat up most of your parasite energy in one go, and replenishing that energy takes a good deal of time. You could use it all up for a big offensive attack, only for the enemy to respond and you wont be able to use your healing abilities.

While Parasite Eve succeeds in blending survival horror and classic RPG elements, I think the potential for something far greater is there. If Square Enix were ever to return to this franchise, I can’t help but think of the potential for it if they took cues from strategy RPGs like Fire Emblem or Valkyria Chronicles. You see in those games, positioning and tactics are even more essential. What could be really interesting though is if permadeath was implemented in a future Parasite Eve game. In those games you can have members of your party die in battle and they’re gone forever. Imagine a scenario where Aya (the protagonist) has to take a team of fellow police officers into a dangerous battle, and there’s the potential for them to be killed off permanently. It works really well with the existing combat system, as well as the game’s fiction. This is all just me imagining “what if”, but I can’t help it. The potential for the gameplay formula in Parasite Eve is so interesting and has so much room for further expansion.

Another interesting choice the developers made is the option for you to move about freely and explore. Unlike a lot of traditional survival horror games where you are confined to a single hostile environment, Parasite Eve sets itself in New York and allows you to jump from a number of different buildings. There are a multiple side quests and optional dungeons in the game for you to explore, and it fits the story too. The protagonist Aya Brea is a New York City police officer after all, so she’s able to investigate various locations to look for clues to her cases. Another way this could be improved upon in a would-be future installment is to maybe flesh out the city itself and allow you to talk to more citizens. Maybe not a full open world or anything like that, but larger more densely packed public locations like you might see in say a Persona game. 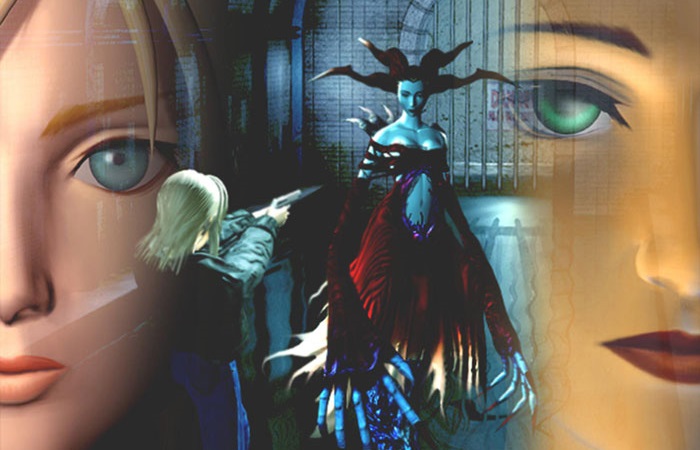 I’ve spoken a lot of about the game design decisions of the first Parasite Eve and the potential of a future installment without addressing the fact that the game already has two sequels. I have not spent much time with Parasite Eve 2, but to be honest I was disappointed that the game stripped away a lot of the RPG elements in favor of a straight up Resident Evil clone. I don’t know much about The 3rd Birthday either other than I know most Parasite Eve fans I’ve spoken to consider it to be a huge let down. The franchise seems to have never received a proper follow up to the first game, or at the very least failed to expand upon what made it special.

What I think would be best for this franchise, would be a full on remake of the original game. Keep the core gameplay intact, but also expand upon what’s there in the ways I suggested earlier. We recently saw a healthy revival of classic survival horror in Resident Evil 7, and JRPGs are making a massive comeback in mainstream popularity with titles like Fire Emblem Fates and Persona 5. Square Enix has something special with Parasite Eve, and I think it deserves another chance. I had not played the game until this year, and despite its age, I was won over by its brilliant blend of survival-horror-meets-JRPG. There’s nothing quite like it and I’m confident there’s a modern audience that would eat it up. Today marks the 19th anniversary of the franchise, and I hope the folks at Square Enix give Parasite Eve the chance it rightfully deserves.