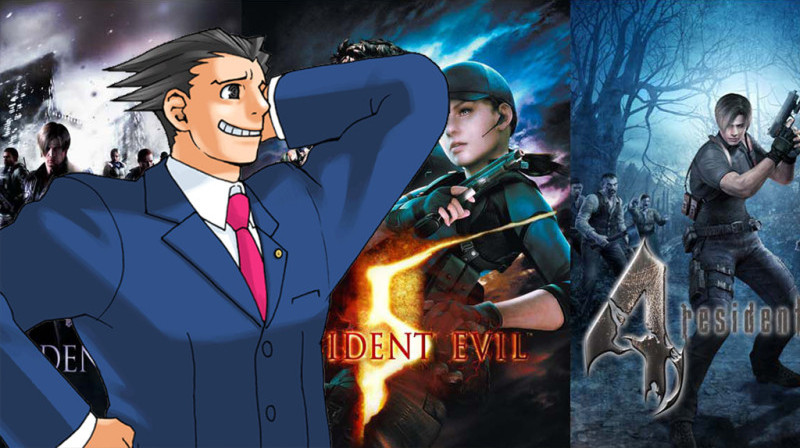 Let’s talk about the Resident Evil 4, 5 and 6 remasters, which are heading to PlayStation 4 and Xbox One this year, starting at the end of this month.

[Video version of article below]

Another day, another port of Resident Evil 4 it would seem. The game has been ported to just about every system under the sun, from its original release on GameCube to PS2, Wii, PC, Mobile, Xbox 360, PS3 and then PC again, it would seem that nothing can stand in the way of Capcom trying to make a quick buck off of work done over a decade ago. Or so the internet would tell you. I’d like to take a moment to discuss exactly what this new trilogy of re-releases means for us as Resident Evil fans, and what you can do as a customer.

The thing I’ve heard the most since this news was announced was a hearty groan from fans of the series, sick of seeing yet another port of a game they’ve already played, and gobsmacked that Capcom would be so audacious as to re-release Resident Evils 5 and 6 on new platforms. Resident Evil 5 and 6 were terrible the fanbase will tell you, and Capcom is nuts for trying to re-release them, remastered or not. Well, I’m here to tell you that, for games that everyone seems to hate, they both sold very well. Resident Evil 5 was Capcom’s highest selling title in the series, with an astonishing 6.9 million sales, and Resident Evil 6 just barely missed that mark with 6.3 million. To put that in perspective, the next closest title in the series is Resident Evil 2 with 4.9 million. Resident Evil 5 sold more than Resident Evil 3 and 4 combined. Resident Evil 4 did eventually make it up to over 5 million copies sold, but only across all three of its physical console releases, GameCube, PS2 and Wii. So, despite all of the hate these games seem to get, someone must have liked them because both 5 and 6 sold like umbrellas on a rainy day.

Capcom is a business, and fans seem to forget that a lot. Capcom’s decisions to shift Resident Evil 6 in a more action-heavy direction was a business decision, and it paid off. Re-releasing Resident Evil 4 over and over again wasn’t greedy, it was a business decision, one that has paid off over and over again as fans upgrade to newer and better hardware. Not to mention, it’s not as if there is no precedent for this. Fans complain about Resident Evil 4‘s numerous re-releases as if it’s something new, when honestly, this is something Capcom in particular, is almost famous for. Very rarely have any of the Resident Evil games gone with a single release, and sometimes will even be re-released multiple times on one platform. Resident Evil 1 for instance, was released three times on PS1, as Resident Evil, Resident Evil: Director’s Cut, and finally as Resident Evil: Director’s Cut: Dual Shock Edition. Resident Evil 2 has a laughable number of releases, gracing Ps1 twice, PC, Nintendo 64, GameCube, GameCom, and finally landing on PS3 with compatibility for play on PSP and Vita. Resident Evil isn’t the only series that has done this; Street Fighter pretty famously has multiple releases, with dozens of “Super”, “Ultra”, “Arcade”, “Turbo” for each title in the series. Phoenix Wright: Ace Attorney wouldn’t even exist in the states had the GameBoy Advance series not been ported to Nintendo DS.

These re-releases of the Resident Evil “sequel trilogy” as it were, are nothing new, they only seem so because they are the latest games in the series. Is it such a bad thing to want newer, and improved versions of some of the best-selling Resident Evil games of all time? Another thing I’ve heard is that fans would much rather remasters of some of the non-numbered titles, Resident Evil Outbreak and Outbreak File 2 for instance. It’s important to remember that, while Outbreak sold fairly well at the time capping at 1.45M, Outbreak File 2 on the other hand crashed and burned with a mere 0.57 million. That does not scream “remaster” to Capcom, nor should it. The best example would be if fans got angry with Microsoft for releasing the Halo: Master Chief Collection, which contains remasters of the first 4 Halo games, including a fully revamped version of Halo 2, but not do the same level of remastering for Halo Wars. Halo 2 broke records on launch day and capped out at 8 million, while Halo Wars is still to this day the lowest selling Halo game of all time, with only 2.54 million sold. Halo Wars sold so poorly that it forced the closure of its developers, Ensemble Studios. That’s not how these companies work, guys.

This is one of the reasons Resident Evil 0 HD happened, because the HD remaster of Resident Evil REmake sold so well; it turned Capcom’s head. I’m sure you’ve heard it before, but this new remaster trilogy is another case of voting with your wallet. If you want Capcom to listen to you, to hear your voice as a fan base, to see what it is that we want from Resident Evil‘s future, then I urge you to choose wisely with these new games. Are you appalled by the very idea that Capcom would re-release these games, in RE4‘s case again? Do you want Capcom to focus more on great releases like Resident Evil 0 HD and the upcoming Resident Evil 2 REmake? Then let your financial voice be heard, and don’t buy these remasters. At least not at first, the first two weeks are some of the most important to a major publisher, waiting just that little bit of extra time will still send the message, and you can still pick up a remaster of your favorite modern RE game. Capcom will pay attention to that. Capcom will turn its head and let its proverbial jaw hang open in shock, if for instance, Resident Evil 6 doesn’t even approach the kind of numbers that Resident Evil REmake HD brought in.

The same can be said for the upcoming Umbrella Corps, a tactical third-person shooter set in the RE universe. While Capcom seems somewhat aware of the game’s dubious standing with fans by releasing it only for PS4 and PC, it would be a huge blow if Umbrella Corps still didn’t meet expectations. But on the other end of the spectrum – if you haven’t purchased Resident Evil 0 HD or Resident Evil REmaster HD, do so now. Buy them digitally, or buy them together in the physical release, the Resident Evil Origins Collection. Tell your friends. Buy them a copy. Let your voices be heard. If there’s something you want from a company, money talks. I know that sounds pretty cold, but this is the sort of thing that killed Ace Attorney: Investigations in the West, and nearly the franchise.

If you want your voice to be heard, if you want Capcom to take notice and change, we need to step up together and voice our opinions not in comment sections, but with cold hard cash. We show we absolutely prefer one version of RE to another, and Capcom will notice. It’s just simple math.