Into the Void: Left-Hand Path 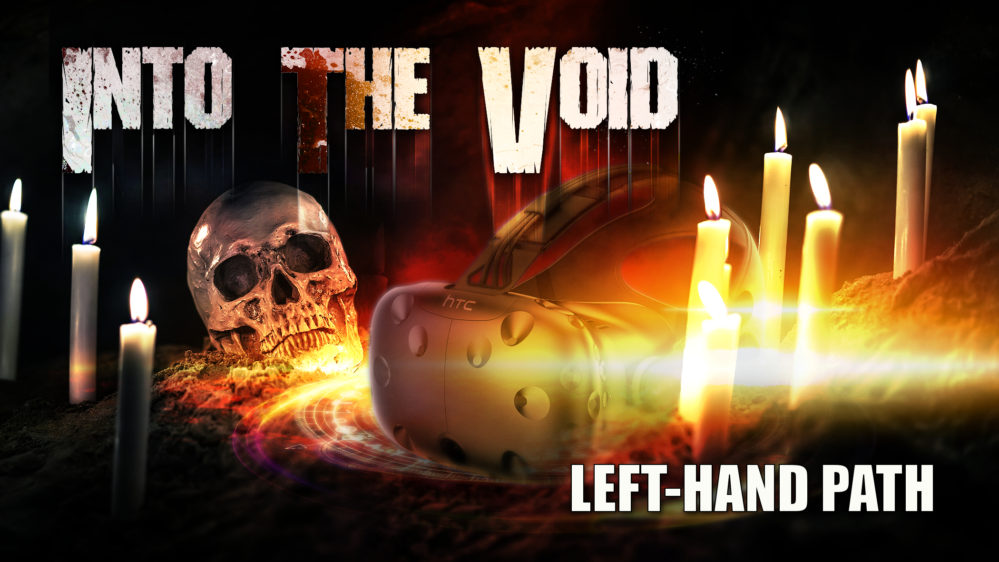 It was in the heat of Summer, year 2016, when I first began my travels within other worlds. Long had I known of them, gazed upon and manipulated them, but it was only with the aid of a certain device that I should finally walk within them. Looking back, I was naive. Naturally, anyone who steps beyond the veil will find themselves feeling some trepidation. Had I known then what I would encounter, it would have turned to dread.

The device itself was a fairly unwieldy thing, the first of its line, aside from the clumsy creations of mad arcanists. This was a different beast; smoother, lighter, and while still it must be clamped upon the face to function it does so with more comfort than those before, and one can peer into the void with far more clarity. Tendrils snake out of its rear, shrouded by the 3 pointed sigil. Runes upon the side hint at its purpose. Translated, they read: “Vive”

I had prepared for this. I had marked myself with the seals of cleansing, gritting my teeth through the pain. I had signed the contract with the Vapor Lords, gaining access to worlds beyond. I strapped the machine to my head, grasped the strange, faceted wands that gain me influence on my journey, and stepped onto The Left-Hand Path.

This is Into the Void. With Virtual Reality being the hot new thing, and with myself recently acquiring an HTC Vive, I have been designated as Rely on Horror’s guinea pig for VR horror. It didn’t take too long for developers to notice how immersive VR can be, and how to use that power to scare the living daylights out of people. Now I, dear reader, will step forward as your surrogate, and put my brown pants to good use, experiencing the best (and worst) VR horror has to offer, and letting you know the answer to what is probably the question on your lips right now: Is it any good?

That’s… a tricky question to answer. VR as a technology is amazing, but still in its infancy. It’s going to take a lot of doing to figure out all the kinks. The rulebook for design has been torn in half, and new methods are being invented all the time. Motion sickness is a big killer for most experiences, and will rule out standard first person movement systems for most. Room scale allows for more immersion and freedom of movement in a small area, but restricts areas beyond that. The sense of presence means that instead of the monster being on a screen, it is right there in the room with you, and let me tell you, nothing can prepare you for the first time that happens. Overall, if it’s good or not will come down to the game itself, and no amount of technical wizardry will get around that. Let’s look at one of the titles on offer. 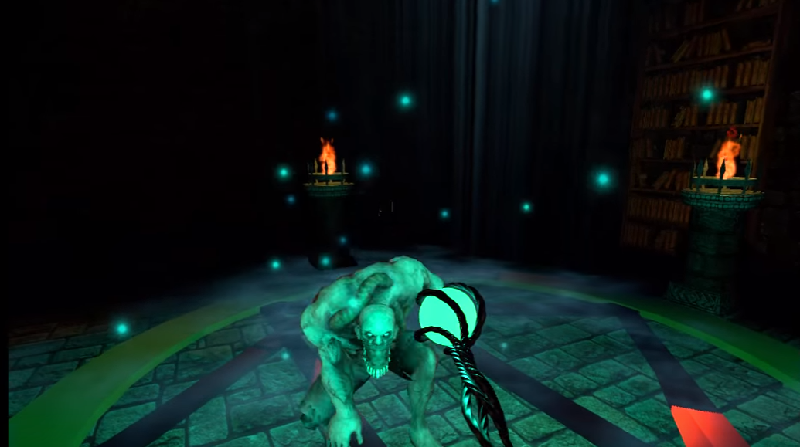 Left-Hand Path is a one man project built by Hugh Hancock of Strange Company. It’s currently available on Steam in early access. I’ve played a couple of hours in, got to the main hub, and explored a couple of it’s areas.

You play as a wizard, of sorts, gaining consciousness in a darkened chamber with odd messages instructing you in the ways of magic. It seems you already “know” rudimentary spells, and can access them via a grimoire. In your right hand you wield a staff of arcane power, through which you channel and aim your spells. With your left hand you interact with the world, and trace the sigils of magic with which to cast spells. That’s right. Left-Hand Path makes great use of the Vive’s Bagel Blasters by having you act out physically being a wizard. No picking spells from a list, you must cast the spell by creating it yourself in the air in front of you. It’s a little fiddly, especially with more complex sigils, but it works, and it feels fantastic. Movement beyond the play area is done by teleporting; It’s a common trick to get around motion sickness, but often feels like a bit of a cop out. Here, it makes perfect sense. You’re a wizard, why walk? Your mastery of the arcane is further built upon with a ritual system, that has you conjuring up a summoning circle, then pushing your staff to the floor, to summon greater powers. The thunderous sound accompanying this is not only great, providing satisfying feedback, but builds the theme too; these are dangerous powers you wield. 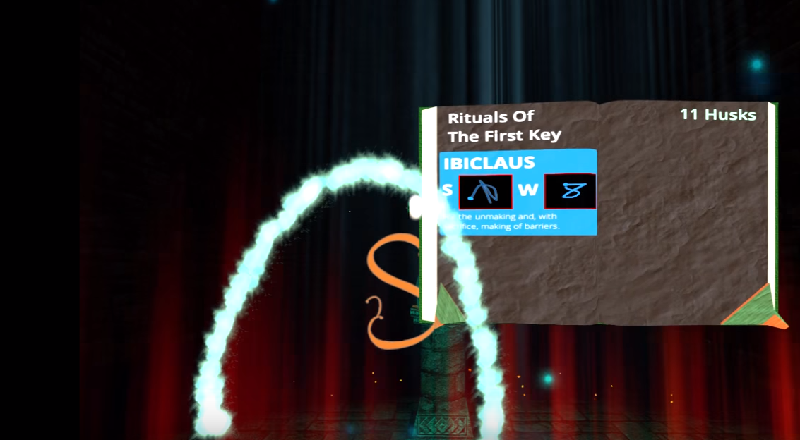 Nothing is more dangerous than the world itself, though. Left-Hand Path makes it very clear that its inspiration is Dark Souls. The collection of “Husks”, used to upgrade your character, are taken from fallen enemies and dropped on death. Enemies are brutal and unforgiving, and areas must be cleared in one go, including the boss at the end. After the first boss, you find yourself in a hub area, speaking to an NPC at a bonfire. Dark Souls  has clearly affected the design philosophy of Left-Hand Path, but that is where the similarities end.

I found Left-Hand Path to be very engaging. Exploring the darkened halls of Nemeroth, piecing together the story of mad mages seeking the Well of all Reward at any cost, trying to discover who you are and why you are caught up in this dark, dead world. The game avoids jump scares, with enemies slowly approaching, threateningly from the darkness. Dread is at the core of Left-Hand Path, and you will learn to fear the dark. There are strange moments of comfort too. Before too long you will encounter a friendly character, who sheds a little light on the situation, and invites you to sit at a campfire with him, so I did. This meant physically sitting on the floor, but there was a strange sense of relief I found, as I sat in the glow of the fire with this stranger, a stark contrast to the unease of my travels up to that point. I think experiences like this may come to define VR gaming.

Unfortunately, it’s not all good. The game is rather ugly, and while some models are quite nice, there is only so much that decent dynamic lighting can do for bland, blocky terrain with single textures plastered over it. There are issues where it is hard to tell which books are for decoration and which books contain crucial clues. There are issues where it is hard to tell where to proceed, as all the walls and floors look the same. There are issues like the blobby, blotchy terrain. Still, it’s early days yet, and some visual flair could add a lot to the already significant atmosphere.

In taking its inspiration from Dark Souls, Left-Hand Path has a lot to live up to in the gameplay department, where it struggles. When first encountering a shambling horror, I was first terrified at it being right there in the room with me. I instinctively and ineffectual swatted at it with my staff, and died horribly. Or at least, faded to black horribly. Left-Hand Path has some serious issues with feedback. It’s unclear how to avoid attacks, despite a note telling you that dodging is essential. Casting a spell is satisfying enough, but the jerky, janky enemies you’ll encounter are all over the place. So far, most will rush directly at you, leaving you with three options:

Spam magic missiles at them till they die.

Spam teleport until they can’t get you.

Spam some combination of the above.

This is a far cry from the depth of combat of the Souls series. You can use terrain to your advantage, bait enemies into positions of advantage, but this feels more like trying to exploit poor AI than outwitting an opponent in combat. It suffers the worst with the first boss; a terrifying, mutated monstrosity that barrels directly at you, and hops between floor and a ceiling shrouded in darkness. With no offensive ability but the basic magic missile, and being trapped in an arena with little terrain to exploit, this became a very frustrating fight. I had to wait for it to jump down somewhere, blast it, then teleport around randomly, hoping it wouldn’t hit me. It felt cheap, but I saw no alternative. I would like to see more reliance on the game’s main mechanic; the spellcasting, rather than overuse of the movement system. A recent patch has done a lot to fix issues with feedback, so it’s clear that the developer is focusing on improving the core gameplay.

Despite these issues, I can still give Left-Hand Path a tentative recommendation. It’s rough, it’s buggy but it’s full of charm, and dripping with atmosphere.  The developer clearly cares a lot about the project, and is involved heavily in discussions with players. I have high hopes for it moving forward, and for an initial foray into VR horror, you can do a lot worse.