Darkworks has just released a prototype (read: beta) of their upcoming survival horror game, Black Death for the PC.  If you haven’t already had the chance to, give the beta a download.  It’s totally worth your time and whatever feedback you can give is a huge help to the developer.  The company admits that Black Death spent a long time in development, and the prototype is to test some of the game mechanics, get some feedback, and set the game’s atmosphere.  Elements of the game are subject to change (i.e.: AI abilities, level design, etc) and this isn’t exactly a true representation of what the final product will be.  There’s no fixed release date yet, so it could be a long time before Black Death sees an official release.

On the surface, Black Death is a survival-horror fanatic’s wet dream.  Resources are scarce and the infected/zombies aren’t exactly pushovers.  But what really ties the game together, and is very apparent right from the start is that Darkworks has the atmosphere factor down pat.  If the devs continue to work on this, Black Death could shape up to be an epic game in terms of atmosphere. 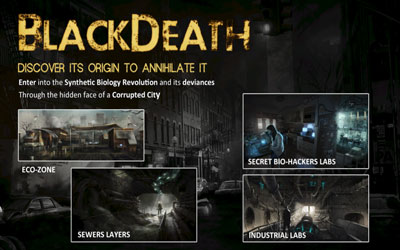 In the opening area, thick fog envelops the player, limiting visibility and making it easy to get turned around.  Kind of in the vein of Metro 2033, you need a gas mask to get through these areas, as the gas is toxic.  It’s almost as if the Infected know this, and try to break your mask and bash it off of your face – should that happen, you’ll incur damage.  If you happen to be without a mask and fighting off said infected, things get tricky.  Running along, checking bodies for health and ammo, you can catch a glimpse of a dark cloud of energy taking a new victim, and it usually happens right in front of you.  The infected enemy jumps up and lunges at you.  We really like the up-close and personal touch. 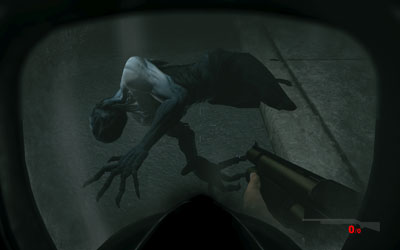 Initially, things are pretty simple – left click to fire your weapon/melee attack and left to shove enemies back.  Generally it takes two or three shots to weaken an enemy, and then a final melee attack to put them rightfully in their place.   However things can quickly spiral out of control when two or three of the guys show up at once.  Since Smoky (the main protagonist in the beta) was only packing a handgun and an oversized wrench at the time, I was quickly put in my place…several times, as you can see from the game play clip below.

As the game progresses, you pick up more weapons, but ammo is still relatively scarce.  The shotgun truly is your best friend it would seem, until the Chemical Blower makes its appearance.  Collect different ingredients and mix them up to create different chemical weapons.  The only option available in the demo is a freezing agent, but seeing the bastards freeze and shatter was extremely satisfying, especially considering the amount of times we were done-in by them.  We wonder what different kinds of chemical-weapons we’ll be able to create and all the havoc we’ll be able to wreak when the final product releases. 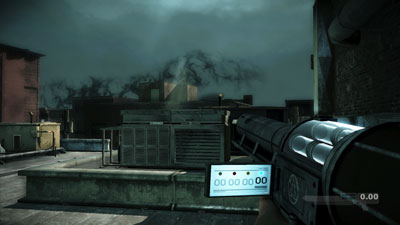 There are some areas that definitely need improvement however.  The option to run away from enemies wouldn’t hurt.  Was there even a run button?  Couldn’t tell, because controls weren’t exactly elaborated on, which is another area for improvement.  Took us a little while to figure out how to access weapons we’ve picked up (it’s the scroll wheel, by the way).  Some, more experienced gamers might take this stuff for granted, but for the rest of us, it’s got to be detailed!

Some other things that weren’t as impressive as others were some of the more supernatural elements to some of the enemies.  There’s an enemy with a fog-shield, and a boss that transports itself around the battle area, and that doesn’t exactly fit in with the rest of the game.  The variation keeps you on your toes, but we can’t help but feel that there’s another way that the devs can create a shielded enemy without throwing black magic into the mix.  However we can’t help but feel that it doesn’t mesh well because there’s so little story to go on at this point.  Is this just a game?  What is the Synthetic Biology Revolution?  What are Biohackers?  Seeing something out of context kind of leaves us feeling a little confused.

Damage shown on the gas mask is cool, how it cracks and eventually falls off – we’d like to see this kind of wanton destruction on the enemies of the game.  Additionally, while the inclusion of a melee weapon is nice, the size of the weapon and the damage it deals don’t exactly add up.  From the looks of it, you’d think it’d be able to knock down an enemy with ease, but as it is, it seems more of a hindrance than being anything remotely useful (also as seen in the gameplay clip…*facepalm*).

Overall we’re really looking forward to what Black Death will become.  As previously mentioned, if you haven’t already, and your system can support it, give the game a download and see for yourself!  You can also leave some feedback for the developers on their forums.