House of the Dead Is Actually High Art - Rely on Horror

House of the Dead Is Actually High Art House of the Dead is high art. Okay, I get it. You look at these horror rail shooters and think, “Oh, those are just those really broken and crappy arcade games that try to milk money out players. There isn’t anything special about those games, they don’t have anything to say about life, the human condition, or the human race’s endless cycle of senseless self-imposed suffering.” But that’s okay though, I used to be wrong too. Upon closer inspection, you’ll actually realize that there is nothing as intellectually challenging and thematically deep as the House of the Dead games.

Let me paint a picture for you, the year is 1998 and Doctor Roy Curien finds himself at the end of his rope. His son Daniel is dying of an unknown illness. So what does Curien do? The unthinkable; he decides to dabble in sciences not meant to be tampered with. The end result is the barrier between life and death being bridged. This is the premise of the original House of the Dead. After the doctor’s creations are released upon the staff, two AMS agents, Thomas Rogan, and G, fight through undead hordes in hopes of bringing Curien to justice as well as saving Rogan’s waifu. 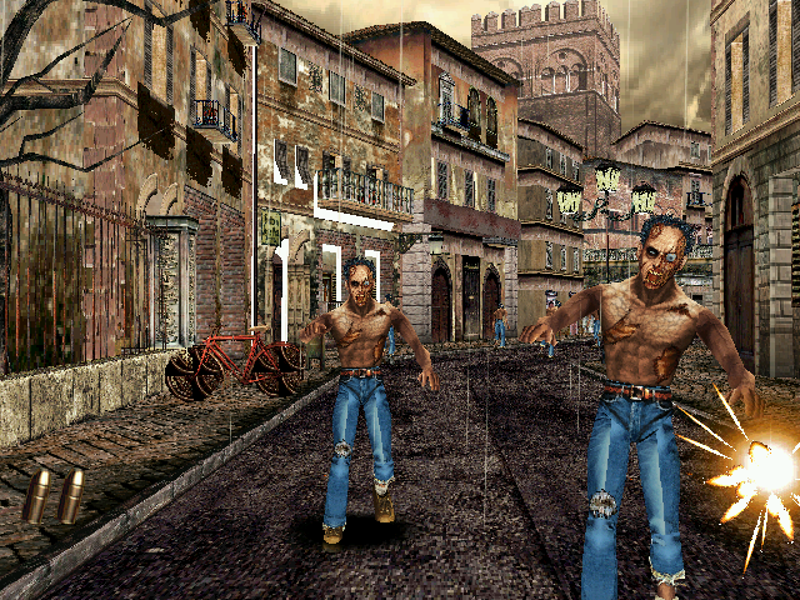 Curien’s actions are not only the catalyst for the central plot of the games, but they also set the stage for the thematic conflict for the entire franchise. Let me explain; as elaborated on in House of the Dead II, Caleb Goldman (an evil corporate mastermind and financer of Curien), explains that when humanity broke the laws of nature, they opened Pandora’s Box, meaning that all of the evils of the world had been unleashed and could never be trapped back in. The reanimated dead are merely the breaking point of humanity’s folly, as they disrupted the balance of nature through overpopulation and thus depletion of the world’s resources, as well as a growing arsenal of weapons too powerful to handled responsibly. The malicious behavior of the human race set the species on a one-way path towards destruction. In a sense, the undead are not the ‘evil’ within Pandora’s Box, they are the mere culmination of it, even representative of it. 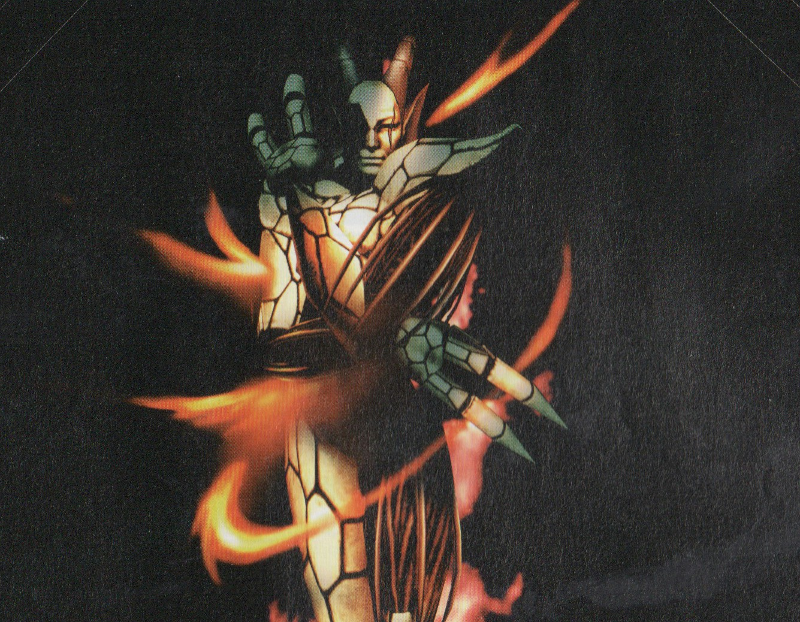 To illustrate the severity of the situation the HOTD universe finds itself in, the emphasis is often placed on the overwhelming odds our protagonists face, and the seemingly limitless power of some of the more significant mutants. In the original HOTD1, our heroes are portrayed as starry-eyed shonen protagonists who are endlessly optimistic for the future — often times proclaiming how Curien will be brought to justice after each hurdle Rogan and G overcome. At the end of their journey, the two face off against Curien’s greatest creation, The Tyrant-esque Magician. The in-game PDA claims that he has no known weak points, a sharp contrast with the previous bosses with clearly defined paths towards victory. Upon deeper analysis, it becomes obvious that The Magician is a parallel for none other than Lucifer. Don’t believe me? Look at the devil horns. Both literally betray their own creators. Read between the lines people, The Magician is the purest form of evil. The message being sent to the player is that evil is unstoppable. This is further echoed by House of the Dead 4 and Scarlet Dawn’s final bosses both of which possess metamorphosis abilities, making them particularly bullshit. The thing is, it doesn’t even matter if our protagonists manage to defeat any of these monsters (evils). In HOTD2, The Magician is reincarnated and before his confrontation, he proclaims that even if he is defeated, The Emperor (the latest monster of the week) will just swoop in and put an end to their conquest. Later when The Emperor is defeated, Goldman echos the same sentiment, that someone will follow in his footsteps, because Sega was still interested in making more HOTD sequels.

Keeping in mind Goldman’s philosophy, the zombies are the crux of the various human-made conflicts, whether those issues be the military industrial complex, global warming, whatever, take your pick. Then our protagonists should be viewed as more than zombie fighting agents but as activists seeking to combat these various ills of the world. As our heroes struggle to outpace the growing zombie outbreaks, the conflicts of the real world never stay dormant permanently. What good is it to remove a corrupt politician if another will likely take their place? What good is it to protect an environment on a one-way train towards destruction? Such a thought can lead to a ‘Doomer’ mentality as can be observed in Kate Green, one of the series’ protagonists. 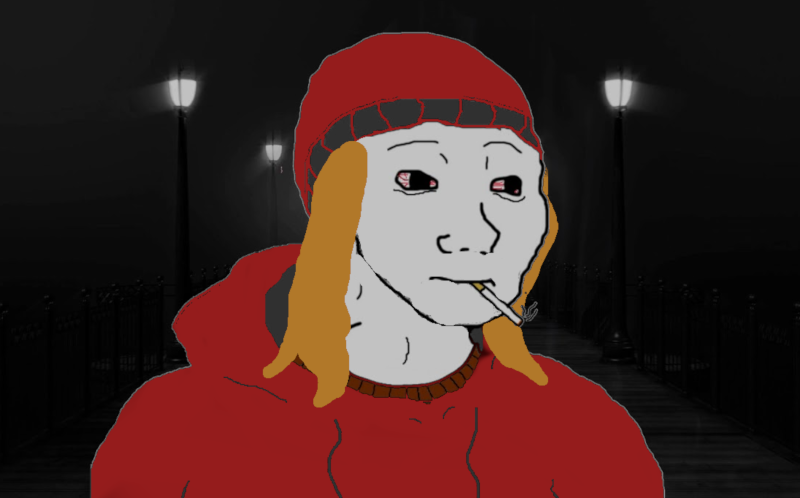 Throughout HOTD4, we see an eloquent and subtle repetition of an idea. Numerous times, AMS agent James Taylor tells Kate … what? To not give up hope, an absurd notion considering this series’ fourth foray into the cyclical song and dance of defeating the undefeatable only to find humanity in the midst of yet another world-shattering conflict. Despite this, Kate strives to maintain hope but regularly loses across her journey. However, during the battle with the newest monster of mass destruction, The World, one of the noblest and most heart-wrenching sacrifices in gaming occurs. James finds a way to defeat the creature via PDA detonation, creating a massive explosion that would bring an end to the creature. James’ last words to Kate were… 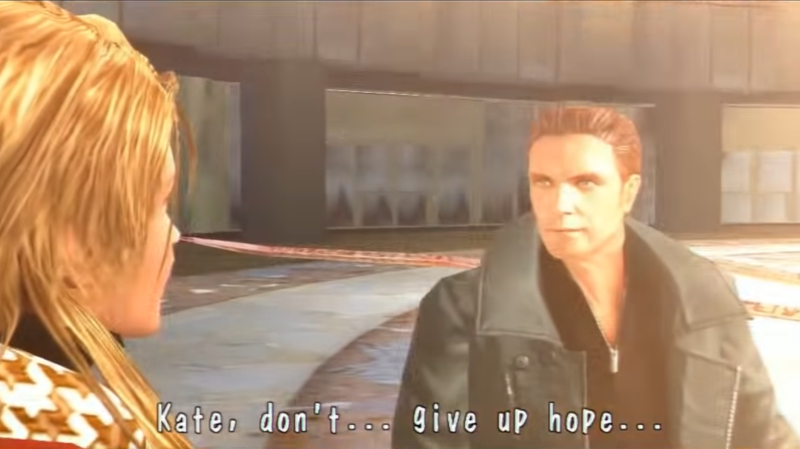 You are probably thinking that James is a complete idiot. He sacrificed himself to stop the bad guy of the week. There will be another one sooner or later, and that life is nothing but never-ending conflict and suffering. However, this is what makes the James/Kate dynamic incredibly compelling. Look, I’m not saying that James fixed an inherent flaw in human nature by blowing himself up, more antagonists would eventually crop up, but James died holding a principal, the principal that hope must be maintained no matter the costs. James so deeply believed in hope that he was willing to sacrifice himself to just give the human race more time, more opportunities to hope.

These ideas are expanded upon in the current chronological conclusion to the HOTD timeline, House of the Dead III. The game focuses on the daughter of Thomas, Lisa Rogan. Thomas is trapped, out on his latest mission, and Lisa and G are on a rescue mission. Upon their success, our three characters encounter Daniel Curien, the aforementioned son of Roy Curien, the genesis of the franchise conflict, or rather…the root of all evil. In a Shamalian twist, Daniel is disgusted with the actions of his father. While G and Rogan flee to safety, the successors of our lead hero and villain, Lisa and Daniel, team up to take down the reincarnated form Dr. Curien, known as The Wheel of Fate. 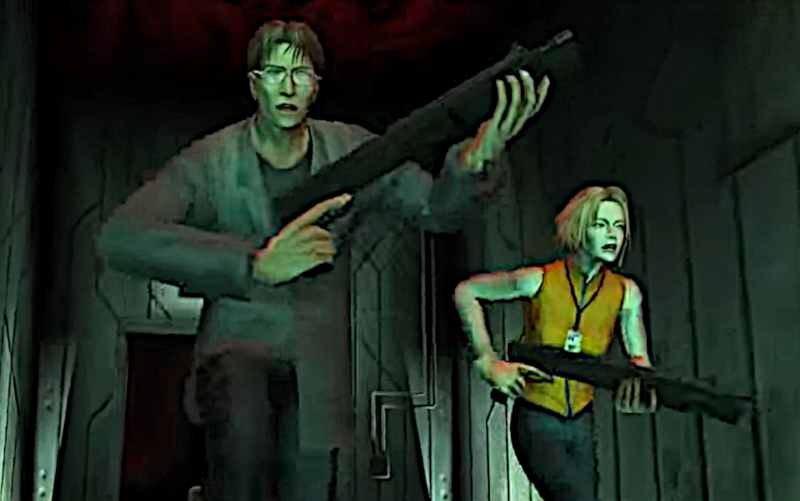 After the battle is won, Daniel’s expressed motivations run parallel with the original’s cast, as he explicitly vows to actively fight to keep humanity on the right path, to somehow find a way to overcome the never-ending barrage of evils. Meanwhile, Thomas and G converse about the future, in which, G inquires if their mission will have changed anything. In a strict sense, this may refer to their latest mission. However, if we read between the lines, which we are obviously supposed to be, we can see that this conversation is meant to be viewed in the lens of the entire ongoing conflict of the HOTD series; the perpetual cycle of death and violence, the endless manmade conflicts. Thomas states,

“Maybe nothing will change…maybe everything will be different…we’ve done our part. The rest is up to them, to believe in themselves, and walk their own paths.”

There is something that James knew and Thomas learned when facing The Magician, something that these monsters and malevolent suits fail to realize. Whenever some asshat with glasses and a suit pulls up to the curb with a briefcase and a bunch of mutants, there are always cookie-cutter shells of protagonists to stand up to them and save the day. Kate has been looking at the situation all wrong. It’s not that despite people’s best efforts these evils keep getting reincarnated. It’s that evil can’t get enough of its ass getting kicked by the good guys. It’s inconsequential how many times The Magician reappears, by taking on these issues one by one, we enable the world to continue on, for it to be better than what it could have been. Every time one of these problems crop up, good people will do what they’ve always been doing in this franchise, pump mountains of bullets into the bad guys. 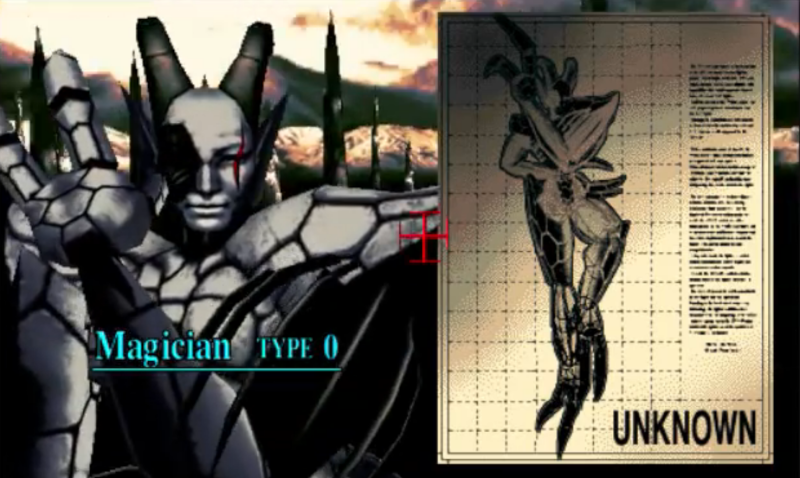 Oh…according to that dinky PDA, The Magician has no weakness? Bullshit! If you genuinely believe that then you haven’t been paying attention. The Magician has a weakness. It’s hope. He’s weak to hope bullets. Every time the player reloads, they are just reminding themselves to not give up. The light gun the player uses to fire said hope bullets isn’t just a light gun. It’s a clear metaphor for the irrational refusal to give up in the face of unending adversity. House of the Dead is trying to tell us that where there is a will there’s a way.

Yeah, problems like corruption and tribalism may never go away fully, and a lot of people may die from these conflicts. Evil will always exist and a new bad guy will eventually crop up, but as long as there are more quarters to load into the machine, a new generation of heroes will rise to partake in the cycle so that hope, love, and harmony can continue to exist. And as long as there is hope, even if it is absurd and irrational, there is a chance to carve out a better and brighter future.

So. you now know that House of the Dead is actually a game for intellectual heavyweights; you’re welcome and be sure to tell all your friends.

This isn’t true for Overkill, though; fuck that game.