God of War and Lords of Shadow Comparison - Rely on Horror

God of War and Lords of Shadow Comparison

RoH ‘loves’ Castlevania Lords of Shadow.  Those of us that have played it are deeply enamored with its refreshing kick in the butt to the Castlevania series.  I’m currently playing through it and have been unable to pull myself away from it for quite some time (yeah, Blockbuster is calling me every day about it).  But there’s something a little off about this title, and you’ve probably already noticed it from looking at trailers, playing through the demo or even just looking at images.  It’s something that’s pretty hard to ignore when you take a look at what a huge title this is.  So just how much inspiration has Lords of Shadow ‘borrowed’ from God of War?

The God of War series has to be one of my guilty next-gen pleasures (next to Move Sports Champions, it would appear).  It’s fun, it was innovative and despite it having some of the worst cliffhangers I’ve ever played through, it still kept me amused long enough to keep me progressing through the series.  I’ve played a lot of God of War, and as it turns out, Lords of Shadow and  God of War are a lot more similar than innocent flattery here.  Of course, we’re overlooking the fact that the two of them have pretty different stories and main protagonists and antagonists here.

Ok, so Castlevania might have equipped their good guy with a whip before God of War was even dreamed up.  But this is the most obvious similarity between the two games.  The chains of the combat cross even turn red when they travel quickly enough.

Obviously a combat intensive game such as this is going to have an upgrade system to the levels and magic.  But take a close look at even the animations when you collect the gems compared to that when you collect the Gorgon Eyes and Phoenix Feathers (enough to upgrade a level and enough to complete a sacrifice).  What’s with the spinning stuff, guys?

As soon as I defeated the appropriate boss (no spoilers there :\) to get the Seraph shoulders, I couldn’t help but facepalm this one.  Kratos might have been able to double-jump before the inclusion of the wings, but floating long distances, even the way in which they appear on Gabriel’s back are a touch groan-worthy.  They do help in certain instances in the game, but…ehh… 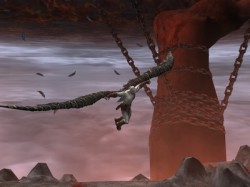 I suppose this could be said for any game that is combat heavy, dodging and rolling are key points to getting through the battle.  The animations just look so similar…!  It can also be said that the most basic way to get around any enemy in the game is to slash, slash, roll.  The same can be said for both games–it’s a shame, really.  Both games give you an amazing move-list and yet the basic principle still applies, so those awesome moves you just learned rarely get used.

The ability to mount certain enemies, while given a fresh take by Lords of Shadow is something that has been seen before in the God of War franchise as well.  Albeit, mounting a Cyclops and powering through enemies doesn’t last quite as long or is it as useful as duking it out with a giant spider and harnessing the power of their web-spinning abilities, or jumping great distances. 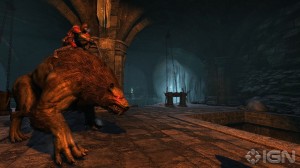 Groan~  This is something that was a pain in the ass in God of War.  I can’t say that it’s any worse in Lords of Shadow, but I can’t say that it’s too much better.  Lords of Shadow lets you choose which button you’ll like to press in time with the cues on screen, instead of just mashing which ever button the game tells you to.  But the fact that there are instances where you ‘need’ to perform a QTE in order to kill an enemy, it just sucks.  On both games.

There are some other things that I’m leaving out, simply because they seem a bit trivial (almost like the QTE one).  For example, the narrow (almost tightrope) walking sections, orbs (ugh, orbs), a bunch of stuff.  Am I being too harsh?  Perhaps these are just all qualities of great games?  Sound off in the comments section below!  Apologies in advance for not including more images, it’s actually pretty difficult to find specific images of Lords of Shadow still.