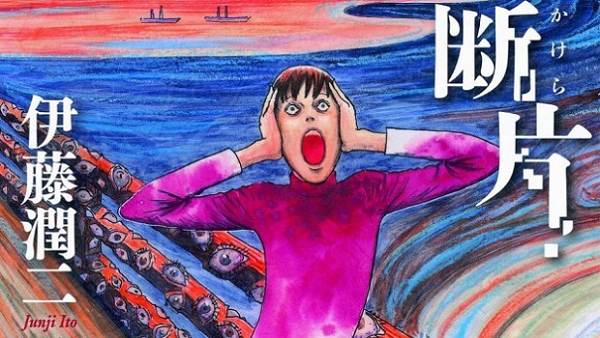 It has been eight years since the world was last graced by a collection of short stories by Junji Ito. For those who aren’t familiar with the man, he is essentially the go-to person for horror manga. His iconic style features Lovecraftian elements mixed with heavy amounts of body horror and his stories star forgotten horrors, unfathomable mysteries, and people descending into insanity. I was very excited when Fragments of Horror finally arrived, but as I read through it I couldn’t help but feel disappointed.

Right out of the box, Viz Media’s edition of this collection comes off as unprofessional. The book features a beautiful cover that, on one side, parodies Edvard Munch’s “The Scream” by putting elements from Ito’s style over it. On the other side it shows an extension of the painting with characters from the stories acting out key scenes. It’s a nice design, but this paperback cover is in no way attached to the book and shifts around constantly, making it annoying to hold while reading. The cover can be removed entirely without damaging it, revealing a stylish hardcover beneath that would have been perfectly functional. 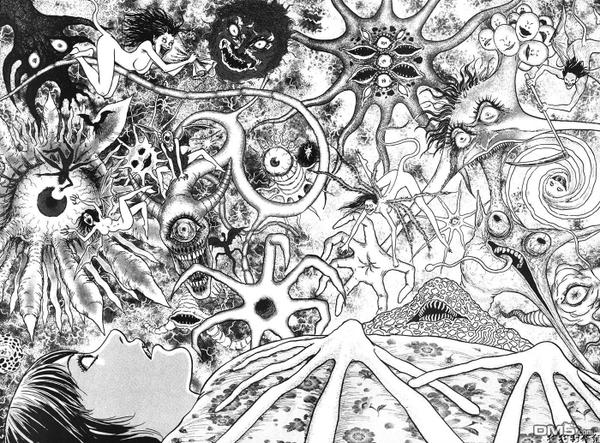 The book itself contains eight short stories and an average reader can probably get through it all in a single night. Most of Ito’s works can be summarized by saying it starts off by introducing readers to a weird problem. For example, in the first story a woman is burdened with treating her husband who has gone paranoid and refuses to abandon the safety of his bedsheets. All he does is peek out from under the covers like a scared kid and beg for his wife to acknowledge the horrors he sees. It gives you some time to ponder the problem before revealing the truth, often accompanied by horrific, surreal imagery, and then it moves on to a conclusion. If you want to see good examples of this, then try googling for Army of One and The Thing That Drifted Ashore, which are the titles that got me interested in the writer.

Compared to his previous works, the stories featured in this book have some peaks, but generally fail to live up to expectations. Several of the chapters are perfectly fine and thoroughly enjoyable, but three of the eight stories aren’t even horror, though some of their elements could work in the horror genre. One is a tale of a family whose deceased members linger as spirits, which reads more like a drama, another is a weird attempt at comedy that feels like you’re missing out on an in-joke, and the final one is another drama story about a babysitter that works a little too hard. While the venture into comedy is a failure, the drama stories could have worked on their own if they received more polish, but their presence in this horror collection is undesired. 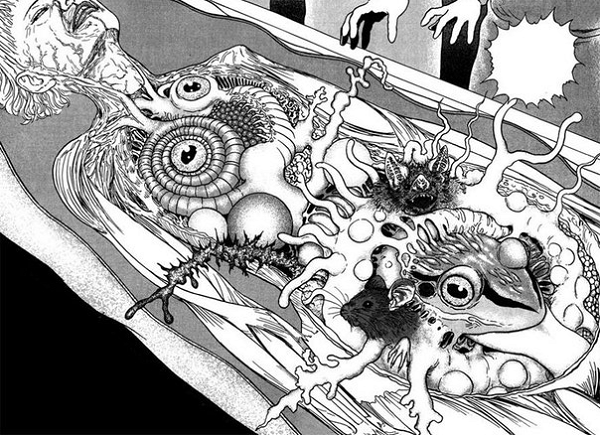 Another issue that I noticed frequently is that the there is too much explaining, leading to details that were best left to the imagination of the reader being filled in. While it’s fair that a mystery is eventually resolved, I feel that revealing all the specifics works against the cosmic horror elements that makes Lovecraft’s style so endearing. Sometimes you don’t want to know or sometimes you just can’t know because the horror operates in unfathomable ways.

Despite of this, the good stories in here are legitimately just that: good. They suck you into a strange world where mystic sorceries and eldritch creatures come into the lives of everyday people to completely ruin their day. Red Turtleneck is a tale of a cheating bastard being punished by having his head sliced off, forcing him to hold it in place forever, Dissection-Chan features a doctor reminiscing about his past in which a girl obsessed with dissecting animals forced him into the role of an assistant. It’s all so varied and instantly intriguing, with a great pay-off in almost all cases. 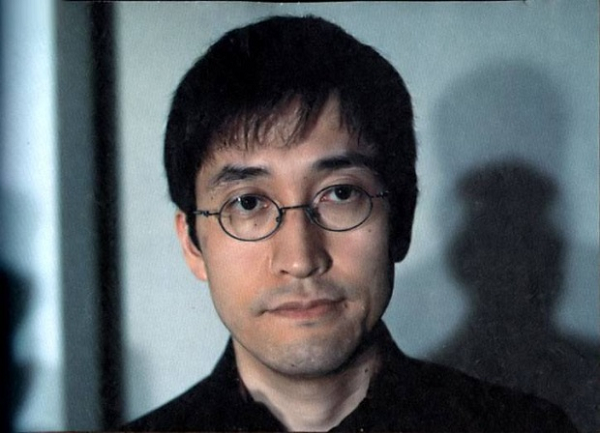 Junji Ito’s art-style has remained virtually unchanged from his previous works and I have no issues with that. The drawings are macabre and feature characters with believable proportions and faces, making for a realistic depiction of humans that allows the body horror to work wonders. The style is also very accessible for westerners that aren’t too familiar with manga, as aside from reading from left to right, it doesn’t contain too many tropes exclusive to manga that would confuse first-timers.

Viz’s translation also reads generally fine and I spotted no notable errors. One exception to this is the story “Dissection-Chan” that, due to its name, uses Japanese honorifics. None of the other chapters do this, so the inconsistency is jarring and I would have prefered it if the translators had made some minor alterations to prevent having to do this.

When it comes down to a recommendation, I fear that too many of its stories are mediocre to justify Fragments of Horror’s asking price. At about $18 on Amazon, it is notably more expensive than other manga and approaches a price generally reserved for a small omnibus. With its many flaws, including a shoddy cover that ruins the novelty of a hardcover manga, a recommendation can only be given to the most hardcore of Ito fans.