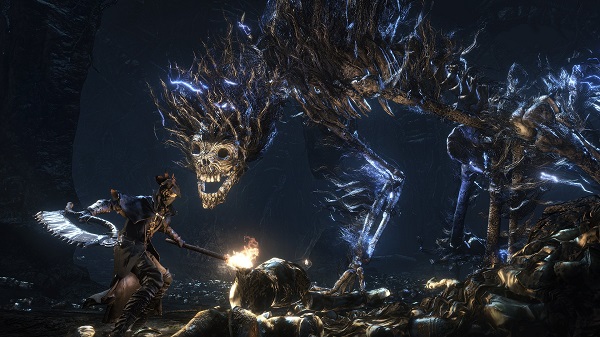 I finally understand the infinite. The vastness isn’t empty but full of horror; and in its emptiness I don’t risk filling its void, but rather getting lost forever. I am nothing in this empty space and it threatens my entire being.

I was never a big Lovecraft fan. Part of it is my fault, part of it is his, but after a month with Bloodborne I finally get it. I finally understand what kept Lovecraft paranoid, and I am left awake at night.

My problem with Lovecraft and his brand of horror doesn’t primarily stem from his well-known views on anyone not white and Christian. No, the biggest problem is that I couldn’t quite take to the writing style he adopted to elucidate his readers on his unique brand of terror.

Every story I’ve read from him (and honestly I haven’t read many) involves the writer describing the truly terrifying, eldritch abomination as something “indescribable”. Or the feeling of sheer horror and infinite madness the protagonist was going through as something “so great it is without description” or something along those lines. I found it a bit lazy and kind of a cop-out.

On the other hand, there was also my lazy imagination not going the extra mile to think up for myself these sorts of horrors. His appeal, as I’ve come to understand, lies in this unknown territory between the imagined and unimaginable. However you chalk it up though, this major problem of wanting unexplainable things explained is what led to the lack of understanding between me and Mr. Lovecraft (but also his racism).
So it wasn’t until Bloodborne came out a few months ago that I was given my first full look into the eyes of his madness, and I’m here to tell you that I get it. I finally get it. 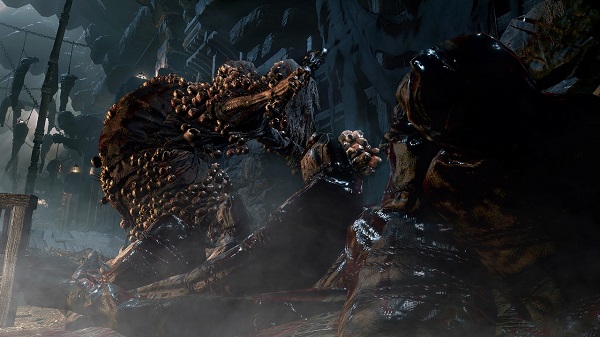 “As you did for Rom, the Vacuous one Grant us eyes, grant us eyes!” – Micolash, Host of the Nightmare.

Bloodborne differs greatly from From Software’s famous Souls series in its setting, but the game still realizes many of the studio’s favorite monster tropes. Ignore the dragons and giants and what is common across all of their games? The poisonous danger that is both literal and metaphorical. The worlds in each of the Souls games are inhabited by all sorts of nightmarish creatures; but the worst in my opinion, are the ones that poison – the ones that petrify. The toxicity, the slow death, is a recurring trope throughout the Souls games, seen in areas like Blighttown and Earthen Peak. They represent the slums of the world in which these games take place- proving the world is rotting while a plague rises from its corpse. The inhabitants of the Souls games are resigned to this poison and as a result the world is both melancholy and somber, but also listless.

Bloodborne is mad though. It rages against itself, creating havoc and chaos. The world refuses to languish against the slow death and instead chooses to rip through the fear that haunts everyone in Yharnam. I thought I understood their madness. At first I made a few guesses as to what was causing this insanity. Something about the blood; I assumed a plague. Some wild disease born from the creatures the hunters were fighting. Whatever it was, I was sure that I would defeat some ultimate evil only to realize that the only reward was more death.

Death is after all From Software’s favorite theme. It was the tagline for much of the Souls series and it is a natural occurrence in Bloodborne as well. But while death follows you in the Souls series, madness is the real danger in Bloodborne. In fact Bloodborne utilizes From Software’s reluctance to share all of its gameplay secrets to the fullest effect. The Insight system the game utilizes is a puzzle in and of itself, and gaining more of it only subtly changes the world by increments, until it doesn’t. It’s only until later that its full effect is displayed and by then it’s too late. To be mad, or to become mad, is as inevitable in Bloodborne as death is in Dark Souls. 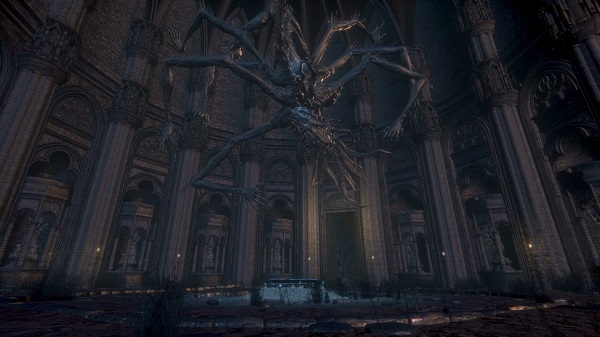 There is no death, only the realization that is revealed once the blood moon rises. I saw them all, the towering Amydalas, the legitimately skin-crawling celestial emissaries. I saw them but I didn’t comprehend any of them. Dragons, skeletons, werewolves, and vampires are easy to figure out. These other things in Bloodborne however- the multi-limbed Garden of Eyes, tentacle growing, Brainsuckers were foreign to comprehension. I understood elements of these monsters- claws, appendages, tentacles, antennas, but couldn’t grasp their true nature. True fear is when a hooded figure cowering in the corner raises its hood to reveal a brainsucking tentacle. At that moment, I was a Lovecraftian protagonist in the truest sense. And I was genuinely terrified.

Bloodborne in essence is the culmination of my least favorite parts of the Souls games, and this isn’t a criticism. I still shudder at any of the Souls areas where insects, large and dangerous, roam freely in the poison miasma. Bloodborne is scariest when seemingly normal elements or areas suddenly change into something completely unexpectedly disgusting. A hood falls off and a large brainsucking appendage attacks you, a snowy mountainside surrounded by large hopping mosquito monsters, but Bloodborne’s best parlor trick is pulling the rug of control right out from under you midway through the game. When the red moon rises and suddenly, for the first time you can see the Amygdala that control Yharnam, you realize that you were never safe from the beginning. Since the start of the game, you could have easily been killed by one of these things without you ever conceiving of the being that killed you. 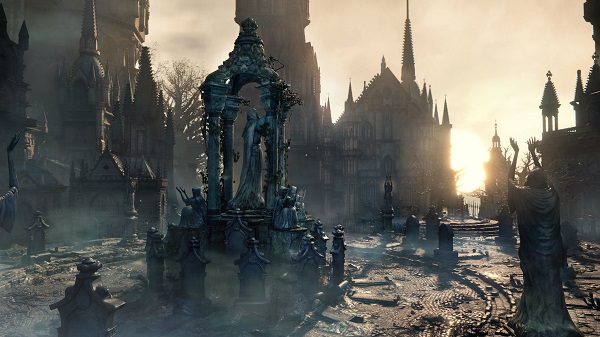 And that’s how I understood the appeal of Lovecraft’s brand of horror. Like in his novels, like in Bloodborne, it is all about the realization – the gaining of a certain insight you lacked previously. Except the knowledge you gain doesn’t make you smarter or wiser, but it is in fact learning how powerless you are in the face of nightmares far larger than you were previously able to even understand. By dangling its most horrible secrets in front of you the whole time without revealing them, Bloodborne succeeds as a true distillation of what Lovecraft failed to describe. Bloodborne showed me the unseeable, and it was kind of fucked up.