Alone in the Dark: The New Nightmare - 18th Anniversary Retrospective - Rely on Horror

Alone in the Dark: The New Nightmare – 18th Anniversary Retrospective 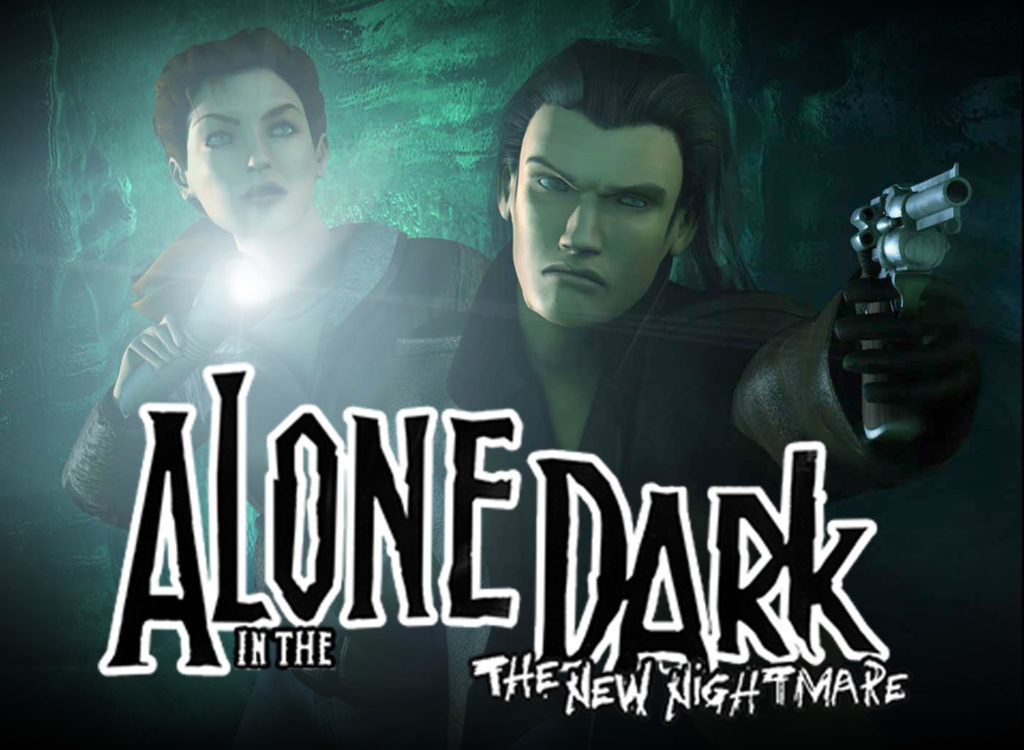 The late ’90s and early 2000s were an exciting time for survival horror. Different developers were trying out new ways to scare players. The 32-bit era took advantage of state-of-the-art techniques to exploit the potential of new hardware. Games like Silent Hill experimented with a serious take on horror, while titles like D, Dino Crisis, Fear Effect, and Parasite Eve each put their own unique spin on their respective game types. The survival horror genre was evolving.

Out of this period of creative new experimentation came Alone in the Dark: The New Nightmare, an ambitious, fixed camera, single-player survival horror title. The game was an attempt to rejuvenate a franchise devoid of any new releases since 1994. The irony was that this new entry would now have to compete in a gaming landscape populated by numerous titles which took direct inspiration from the genre it had helped to create. Developed by Darkworks and published by original series publisher Infogrames, The New Nightmare released on May 18th, 2001 and appeared on numerous platforms, including the PS1, Dreamcast, Game Boy Color, and Windows. It would later see a Europe-only release for the PS2, as well as a forgettable big screen adaptation in 2005 and a tie-in comic book. The series would go on to have two other main videogame entries; another reboot of sorts simply titled Alone in the Dark (2008) for the 360 and PS3, and Alone in the Dark: Illumination (2015) for PC.

Despite being critically well received and financially successful, AITN: TNN never received a proper sequel and has mostly been forgotten. On the 18th anniversary of its release, I’d like to take a look back at what made The New Nightmare so special and why it still holds up today as one of the 32-bit era’s defining horror classics, even though many might not be familiar with it. 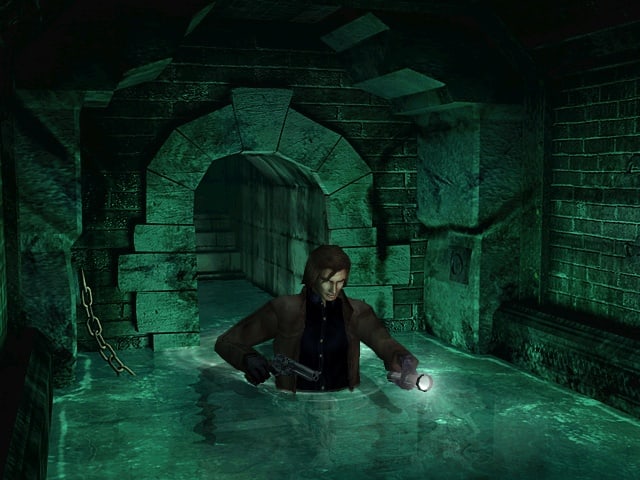 Alone in the Dark: The New Nightmare acts as a reboot and spiritual successor of the Alone in the Dark series, a throwback to a more gothic type of horror. Its goal was to pay homage to the legacy of its predecessors, while at the same time firmly establishing its own unique identity. While it is the 4th game in the series, it has little to do with previous entries besides the name and characters. In the making-of video for the game, Infogrames CEO Bruno Bonnell talks about how they wanted to go back to the series where everything started and make the very bizarre real. 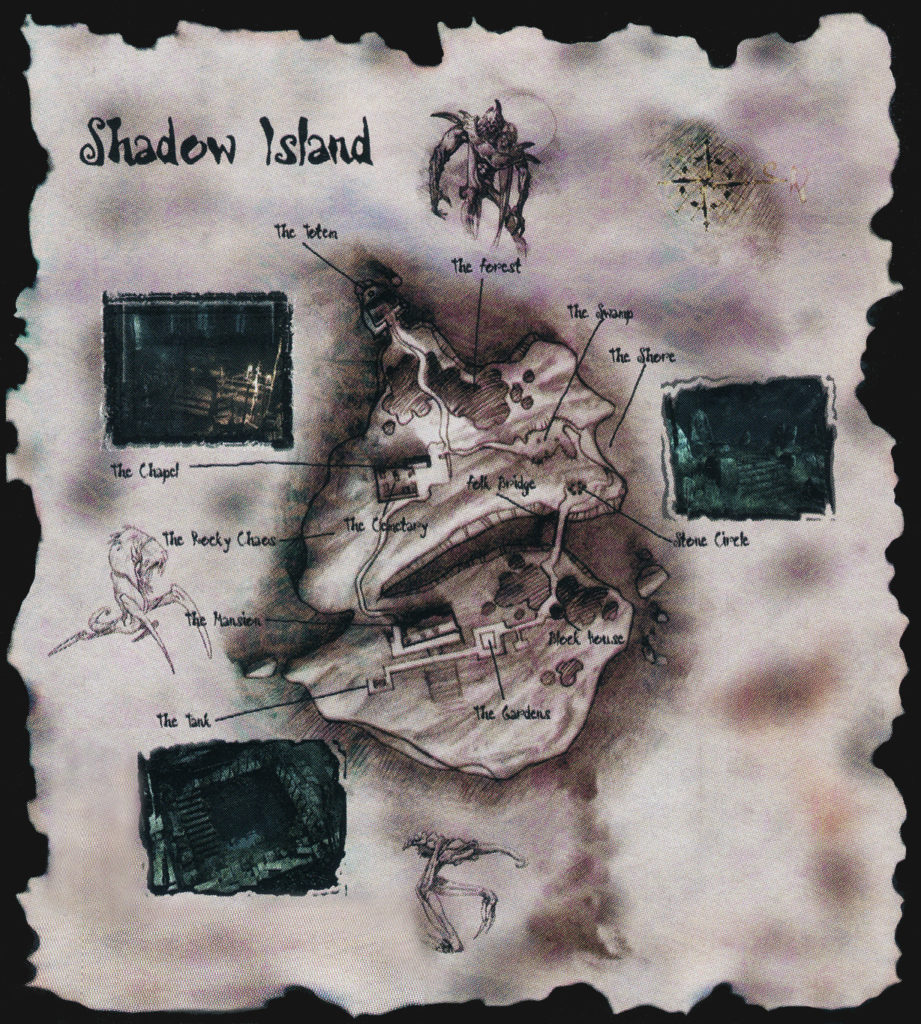 The game follows series protagonist Edward Carnby and newcomer Aline Cedrac. Far from his portrayal as a 1920s era gentleman detective in the original AITD, here Carnby is a long-haired, trenchcoat-wearing private eye. As the game opens, he learns that his friend Charles Fiske has been found dead on Shadow Island, just off the coast of Massachusetts. Fiske’s death has been linked to a reclusive professor named Obed Morton and his research into the abkanis Indian tablets. Aline is a talented young ethnology professor who accompanies Carnby to help translate the tablets and search for clues to her family’s past.

As with the original AITD, you have the choice of playing as either of the two main characters from the outset of the game. Carnby’s story is more action-heavy, while Aline’s focuses more on puzzles. As with Resident Evil 2, you’ll need to play as both characters to experience the complete story. Both characters are personable, and it is fun seeing their interactions with one another. The voice performances are appropriate for each of them, even if they are a little stiff at times. Other characters, along with audio and film recordings you find along the way, help flesh out the backstory of the island and the ignominious Morton family history. During gameplay, you have the option of using your radio to reach out to your partner for guidance or updates. You don’t always get a response, but when you do, it’s an excellent way to hear about your partner’s progress and learn valuable information on the story.

It’s hard to talk more about the game’s story without getting into spoilers so I will refrain from going too in-depth for those who haven’t played it yet. Suffice to say that the game’s premise takes the idea of a haunted house and expands that into an entire island. The environments range from wooded, dilapidated exteriors, the claustrophobic hallways of the manor, to an underground honeycomb of cavernous tunnels, and beyond. 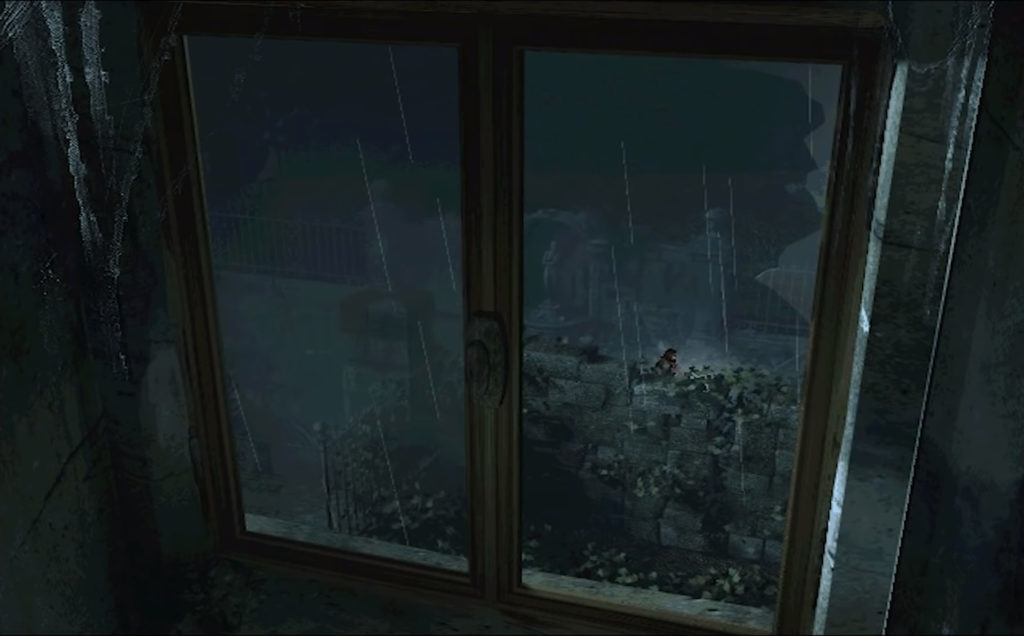 The New Nightmare pays specific homage to several hallmarks of the series, including its use of extreme, cinematic camera angles and an oppressive, atmospheric mood. Multiple lavish cutscenes, gorgeous pre-rendered backgrounds, and highly detailed character models all contributed to the game’s AAA look. These highly detailed backgrounds can at times be a double-edged sword, though. Because of the way some things are laid out, camera angles can be hidden and important items and clues obscured. You really have to search around for everything. The game’s driving, oppressive soundtrack immediately immerses you in the dark, gloomy environment, alternating between a pulse-pounding beat and moments of silence. Each type is used to its best effect, maintaining a consistent level of tension that keeps you on the edge of your seat.

Movement in the game is in keeping with the standard tank controls in survival horror games of the time. Your character is mapped to the d-pad, while you control a flashlight with the left analog stick. You have the option of turning it off and on and have full control to shine it on any part of the environment. Double-tapping back on the d-pad does a 180 turn. AITN: TNN had some impressive lighting effects for the time, including lens flares on the flashlight, background effects, and dynamic shadows cast by different light sources. Charms are collected throughout the game and serve as the game’s version of ink ribbons, allowing you to save your progress. 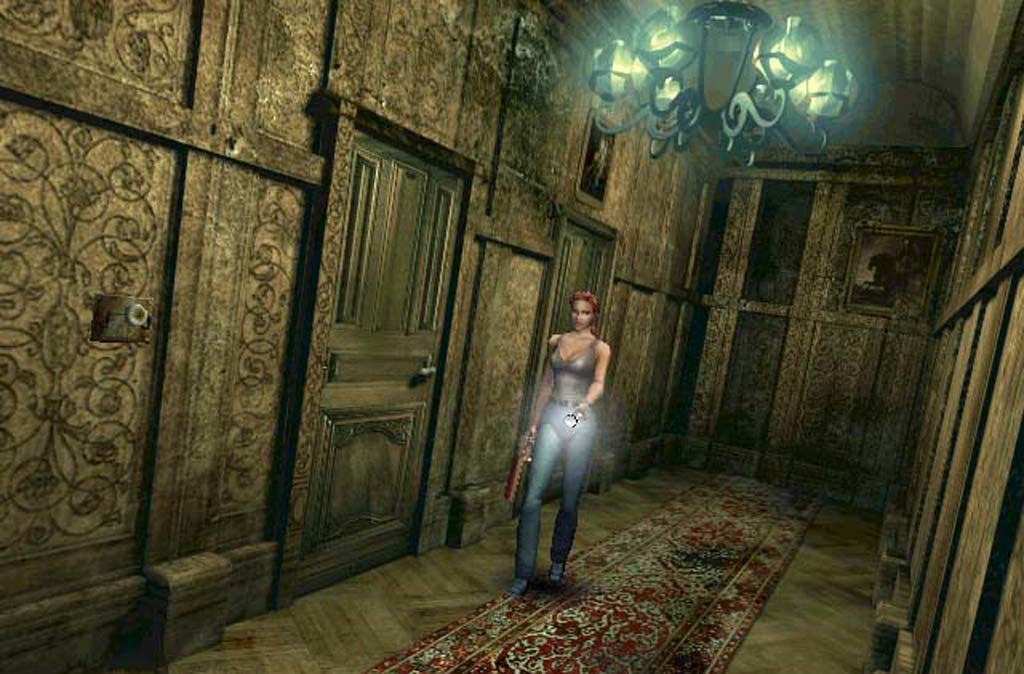 The interplay between light and dark is another critical element of AITN: TNN. The game is rendered in such a way that your light can accurately illuminate surroundings, objects, and characters, all while casting dynamic shadows and highlights. It’s one of the standout features. Flashlights, as a convincing visual and useful gameplay mechanic, is a feature that started hitting its stride with the 32-bit era. AITN: TNN took advantage of the technology of the time to replicate in-camera lighting effects like lens glare and rim-lighting — this was before game developers could incorporate dynamic systems which calculate complex lighting and rendering effects, so TNN’s developers had to find a way to achieve the same results manually. The effect of the layered lighting utilized in the game is something truly unique and was an innovative way of working around technical limitations.

In addition to the flashlight, you also have a host of creative weapons to combat the supernatural. They range from customized pistols and shotguns, which utilize magnesium and phosphorous rounds, to plasma cannons and lightning guns. Some of the more eccentric weapons definitely have a gothic ghostbuster vibe to them and feel really satisfying to wield. It’s fun to experiment with which weapons work best with different enemy types. Some games make you feel overpowered by throwing a lot of ammo and weapons at you. Others strip everything away, and you’re lucky if you can break into a light jog to escape from enemies. TNN finds the right balance of keeping you well-equipped and empowered, while still limiting your resources enough to keep you feeling on edge. 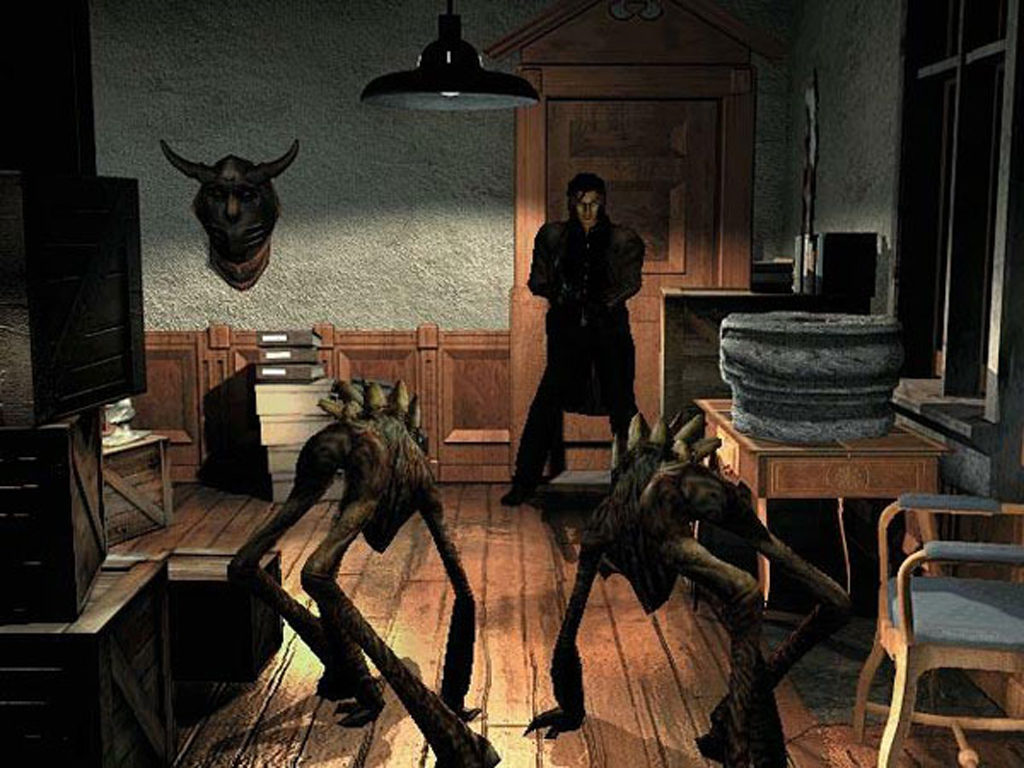 Enemy design and behavior are also key components of the game. Through their unholy incantations, the Morton family has summoned supernatural creatures of darkness, running the gamut between hulking humanoid designs and low-to-the-ground insect-like crab monsters, to giant sewer gators and tentacles monsters. These creatures genuinely seem to stalk you. Since ammo is limited, you have to decide if it’s worth it to stick around and fight or to turn tail for the nearest exit. One of the fun things about the game was looking forward to seeing what crazy monster would appear next; the variety kept things fresh throughout its runtime.

AITD:TNN’s influence on future titles in the survival horror genre can be seen in the innovative use of items and inventory, and the ability to break apart and recombine different items in new and interesting ways. Certain puzzles could only be solved by disassembling items to retrieve a crucial component. At one point, you have to put a special blue lens filter on your flashlight to reveal hidden markings in the environment. Other puzzles are solvable by using clues heard from audio recordings, requiring players to remember a specific phrase or sound to complete certain puzzles. These are just a couple of examples of the game’s effective marriage of gameplay and puzzles. Very few games took advantage of puzzles and inventory the way TNN did.

Not only was the game technically innovative, but it also helped to further the moody aesthetic of the survival horror genre. The developers went out of their way to create an oppressive tone and atmosphere. The driving beat of its soundtrack helped keep players on edge, and its engaging story gave them a reason to continue playing. It proved that you could have a well-written story driving the gameplay by encouraging players to dig deep to uncover all the secrets of the island throughout the game’s two 6-8 hour campaigns. 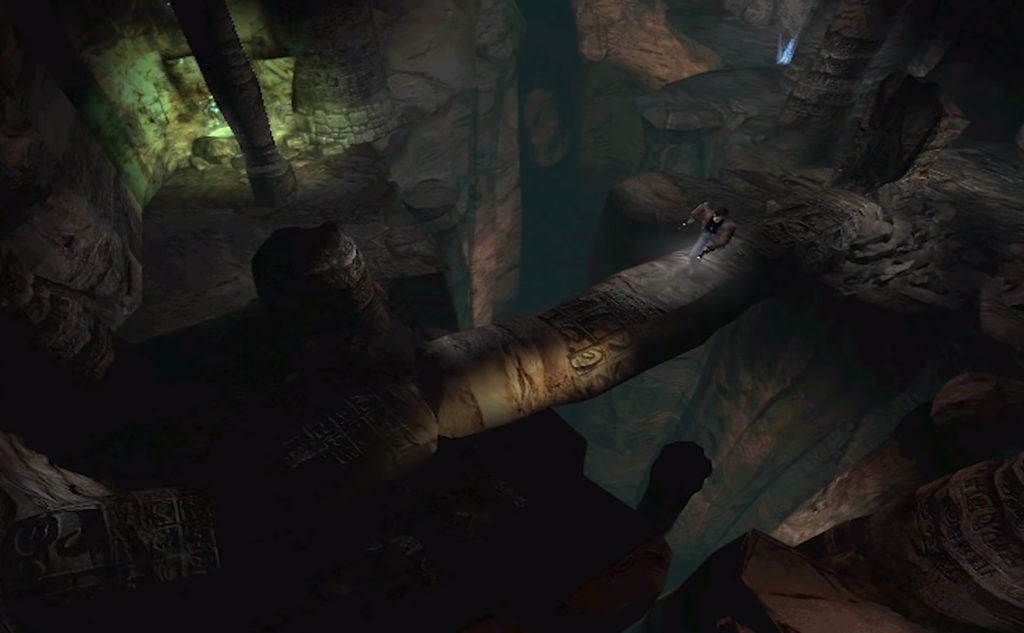 While perhaps not quite as influential or well known as its bigger brothers, Alone in the Dark: The New Nightmare is still a well-crafted, finely honed piece of 32-bit survival horror that doesn’t get recognized nearly enough. Any fan of old-school survival horror owes it to themselves to try out this neglected gem. It’s currently available on PSN (PS3-only) and GOG.com for $5.99, and Steam for $6.99.