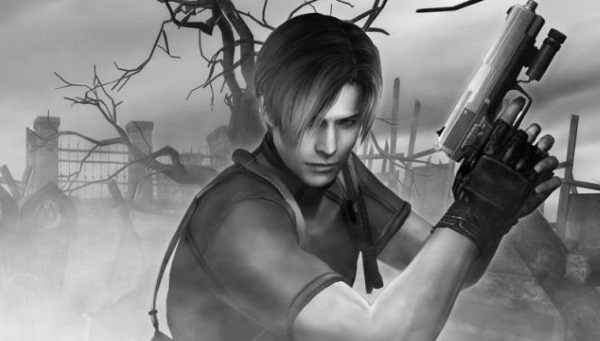 It is pretty easy to argue that Resident Evil 4 has had more influence on modern console gaming than any other single title. Its DNA can be seen throughout the past 10 years of AAA game development. It is a game that was as praised as much by critics as it was condemned by longtime fans of the series. No matter how you feel about it personally, it never fails to get people talking; due to its divisive nature among fans, how it shaped an entire console generation, and its lasting impact on survival horror as a whole.

“You’ve never seen Resident Evil like this before,” that quote is my earliest memory of the game we would eventually come to know as Resident Evil 4. It was a tease for an upcoming reveal of the game on the part of a magazine outlet I’ve long since forgotten the name of. This was back in early 2004 when I was a massive fan of the franchise, and those words really stayed with me. All of the trailers for Resident Evil 4 (now known as the 3.5 version by most) made it already look wildly different from the previous games in the series, so why all the secrecy at this point? Well, not long after this tease we finally saw it, and boy, we most certainly had not seen Resident Evil like this. 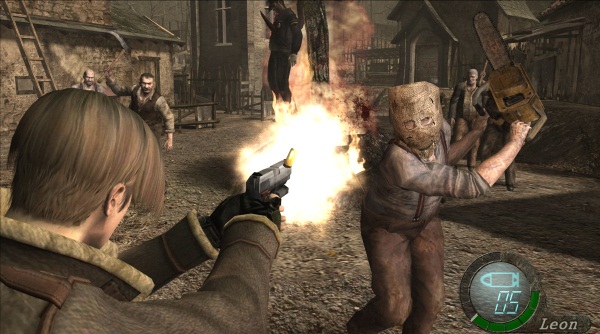 What was revealed was a game that looked nothing like Resident Evil. No fixed camera angles, no Umbrella Corporation, no viruses, no zombies, and gameplay that was clearly a big departure from what people expected of the series. As silly as it may sound, I was actually in a bit of shock the first time I gazed over that initial preview. Resident Evil was a series I had grown up with from about 1997 going forward, and everything I had loved about it was missing–a sentiment many fans shared. Despite that, it was hard to not get excited over the odd idea of Leon rescuing the president’s daughter from a group of murderous religious fanatics.

Then in January of 2005 the game finally came out, and it was time to see if all that nervous anticipation culminated in either a welcome change or a betrayal of the series. That first night I spent with it was one of my most memorable gaming experiences ever. From barricading myself inside a house to keep Ganados away, to hammering on my Gamecube controller to outswim a giant amphibian, there are just too many amazing moments in those first few hours of Resident Evil 4 to list them all. As a longtime fan I was conflicted because it certainly wasn’t the Resident Evil I knew, but it was just so damn good and fresh at the same time. It was like cheating on a diet; you shouldn’t do it, but man does it ever feel good! Resident Evil 4’s flavor of horror was worlds different from the the games in the series that preceded it. Those games had a slow build, an emphasis on dread, atmosphere, and isolation. Resident Evil 4 on the other hand was a frantic mad dash from death. Ammo and resources were much more plentiful, but that was because enemies were far more numerous and almost every hit took away half of your health. Resident Evil 4 distributed damage much like a Dark Souls game in that enemy attacks do a lot of damage and getting killed in a single hit can easily happen, but every enemy attack also has a long and easily noticeable windup animation. It really ties into the frantic feel of the game, and there’s an immense sense of satisfaction in hitting a Ganado just before they’re about to finish their attacks. 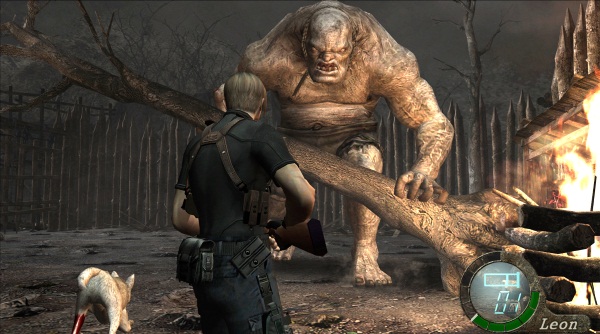 A lot of Resident Evil fans even to this day feel that this game was a betrayal of the series. While I agree that it ultimately set the series down a less than desirable path, I can’t help but feel it embraced a lot of what the original Resident Evil game was about; the fear of the unknown. In both Resident Evil 1 and Resident Evil 4, you have no idea what monsters inhabiting the environments you explore are initially. Whereas in Resident Evil 2, Resident Evil 3, and Code Veronica, you automatically know all the horrors within the games are the result of a X/Y/Z-Virus of the week. Resident Evil 4 tore the proverbial rug out from under the fandom and gave them a bit of mystery once again. Like the first game in the series, Resident Evil 4 was a trendsetter.

What is most interesting about revisiting Resident Evil 4 now is to see just how much it influenced modern game design. The game came out at the very tail end of the 6th generation of consoles, but it felt more “next-gen” than practically every game out in the first year of the 7th console generation. Things like quick-time events, large scripted special events, and event style bosses were in gaming prior to Resident Evil 4, but it is certainly the game that popularized these practices. These things were really fresh in 2005, but now in 2015 they are so common and abused that most people have grown extremely tired of them. Though it’s a testament to how well designed Resident Evil 4 is in that it still does these things better than most modern games. Take quick time events for example: in Resident Evil 4 they’re used to drive home the frantic ‘just-barely-made-it-out-of-there’ theme of the game. Nothing beats that sensation of hammering on the A-button while being chased but the Del Lago in the water while just getting into your boat and escaping. Whereas something like The Wolf Among Us just uses quick time events as a sort of shortcut for not having a real combat system. The 7th generation of consoles was full of games that were clearly influenced by and utilized these practices to the point where they are heavily abused. Even now in the 8th generation QTEs and large scripted events are in nearly every AAA release. For better or worse, it is a testament to how influential and fresh Resident Evil 4 was at the time. 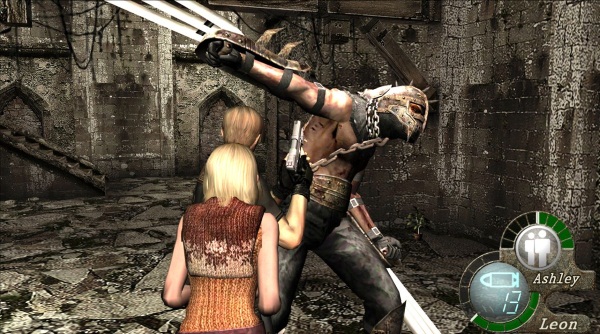 While few would deny Resident Evil 4’s influence on gaming as a whole, many would actually make the argument that same influence nearly killed the survival horror genre entirely. In the wake of Resident Evil 4, survival horror nearly completely died out. A genre that once flourished on the 5th and 6th generation of consoles was turned into something else during the 7th. During this period, what few horror games there were generally tried to ape Resident Evil 4’s success and design to varying degrees. Pure survival horror was extremely rare, instead “action-horror” games like Dead Space were the new kids on the block. Horror games became much more linear, easier, and accessible for new players than they ever were before. A genre that was once all about punishing the player and making them afraid was quickly being diluted into this weird action schlock.

Now there’s other things to account for when you talk about this period in gaming when you talk about the downfall of survival horror. Things like online multiplayer and the popularity of games like Call Of Duty on console are a big factor as well. However it certainly doesn’t help things when Resident Evil – the series that created survival horror – wasn’t even a part of that genre any more. While I stand by my earlier statement that Resident Evil 4 is just as much of a horror game as the previous entries, there’s no doubt that it launched another trend–shifting of focus from survival horror to this new action-horror genre. Resident Evil 5 took this several steps further in adding online co-op and featured a lot of influence from franchises like Gears Of War (which ironically enough was heavily influenced by Resident Evil 4, too). Then Resident Evil 6 came out and was the ultimate example of everything bad about quick time events, scripted events, and a lot of other unfortunate practices that plague modern game design. Thanks to indie darlings like Amnesia: The Dark Descent, survival horror is back in a big way. Games like Alien: Isolation prove that big publishers are finally moving away from the action-horror genre and finally have faith in pure survival horror again. It is a strange thing that as the genre is finally getting its footing again, that Resident Evil itself is very much struggling to figure out what it wants to be. The series is in need of an even greater overhaul at this point than it was when Resident Evil 4 came in and mixed everything up. 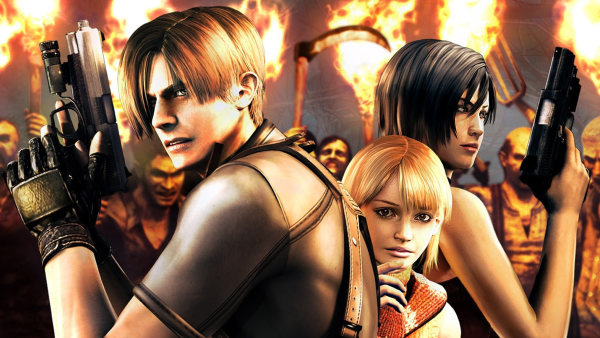 Resident Evil 4 is simultaneously everything great about the series, while unintentionally setting the franchise and survival horror as a whole down an unfortunate path. It is a game so refined and well designed that it became a benchmark that forever changed the games industry. When I look back on its legacy, I’m filled with both wonderful nostalgia and a bit of regret that it was the moment the series jumped the shark. We can only hope that one day Resident Evil can be held in this high esteem again. For us horror fans, Resident Evil 4 is like a part of us we can’t let go–let’s leave it at that for now.