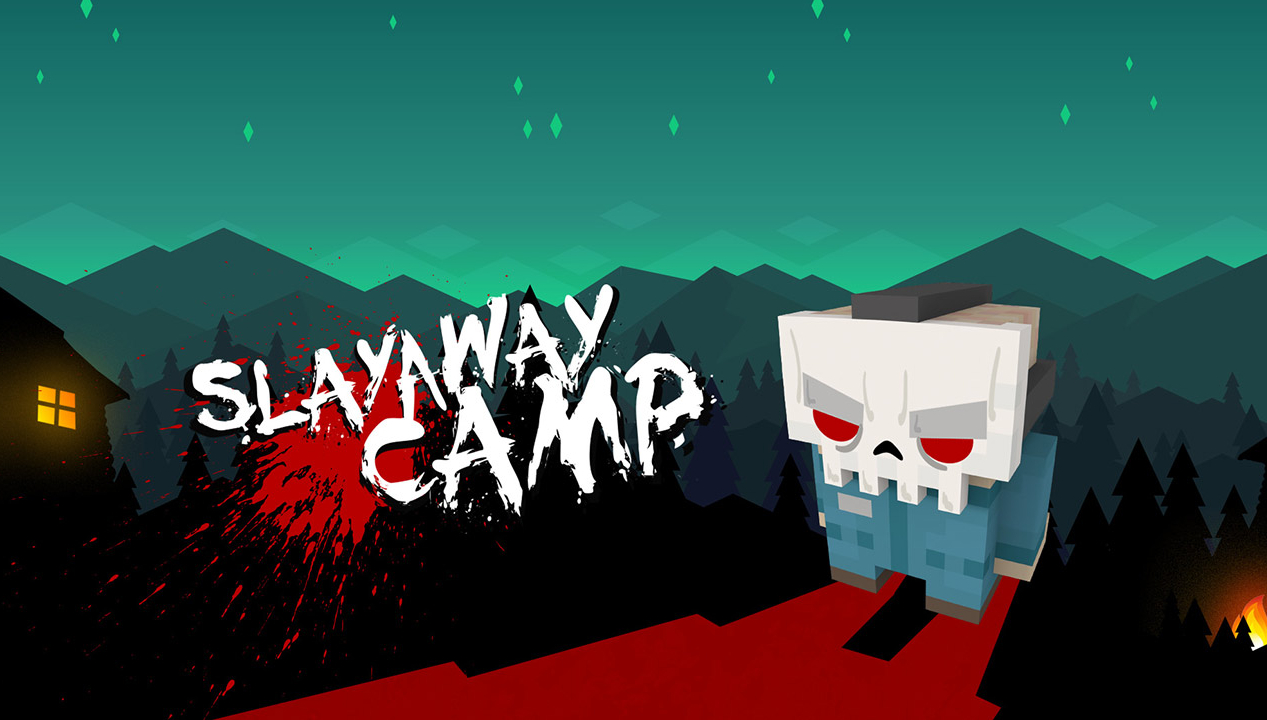 Friday the 13th: The Sliding Puzzle Game. That’s the gist of Slayaway Camp, a cute but extremely violent puzzle horror game inspired by the best and cheesiest 80s slashers. This game lets you rack up a body count that would put Voorhees to shame.

Perhaps the most successful ode to slasher films ever made, Slayaway Camp starts you off as one of several killers, Skullface — a masked madman that’s got a grudge against camp counselors and is intent on eliminating them all. The first thing you’ll note is the cutesy graphical style of Slayaway Camp, which is presented in a 3D pixel art style that’s reminiscent of games like Crossy Road. Even your killer looks downright adorable, as blocky and angry as he (or she) is. The second thing you’ll note is how damn bloody it is. Oblivious to the torment they’re about to face each and every round, the camp counselors stand around daydreaming about all the drugs and sex they’re going to do until you bring the pain.

You control the game by sliding your character any of the cardinal directions, which moves you across the playing field until you hit an obstacle. If that’s a wall, you stop. If a counselor, you tear them apart and leave nothing behind but a skull and gallons and gallons of blocky blood. Your job is to kill every person on the game board and then escape via a pentagram portal that opens up. By the time each round is over, there won’t be much left that’s not painted red. 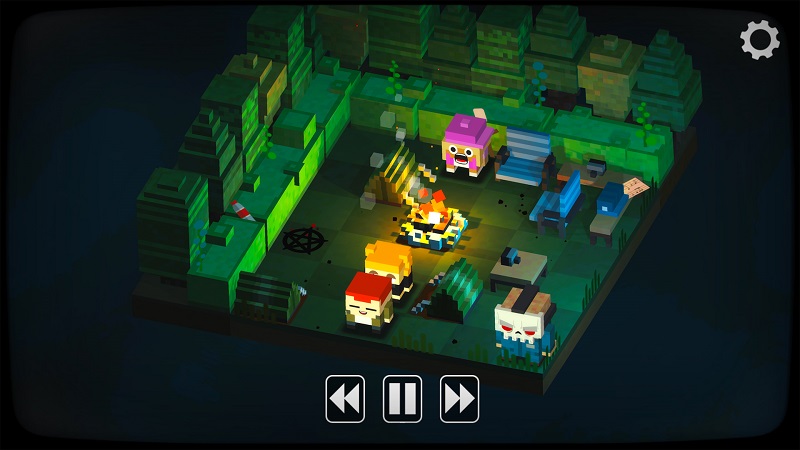 Slayaway Camp starts off fairly easy and you’ll laugh with glee as you take out each successive counselor in increasingly ridiculous ways, but it soon gets trickier and trickier as you progress. Sliding adjacent to a camper or killing a nearby friend of theirs will make them flee in the opposite direction, and you’ll soon have to learn to position your kills to set up the next. Obstacles such as campfires and electric fences soon present new challenges to avoid, as well as cops and even a SWAT team. If you end up in the latter’s red laser sight, you’ll get shot on the spot, requiring you to flip an available light switch to take them out in the dark.

If the screams of your victims weren’t enough, at the end of each “scene” (level) you’re gifted with a mini-game that features a moving cursor traveling back and forth over a bar. If you stop it in the red kill zone you unleash an even more gratuitous execution, one that the equally over-the-top narrator will describe as “GORETASTIC!” or “SPLATALICIOUS!” It’s violent as hell but all the more funny thanks to the graphics, which juxtapose perfectly with the enormous amounts of bloodshed, making even the most extreme murders hilarious. Horror fans will be doubly rewarded with kills that replicate classic moments from dozens of movies — everything from a The Burning-esque scissor kill to a basketball game out of Deadly Friend. The presentation of it all is also delightfully grindhouse.

Some of the later levels can get frustrating because there’s generally only one route to reach completion, but a nifty rewind function allows you to try out different methods through trial and error. There’s even a hint system you can throw some in-game coins at if you get really stuck. For the most part, this is a rewarding game. The more time you take to learn its nuances the easier a time you’ll have, and consequently the more hooked you’ll get. 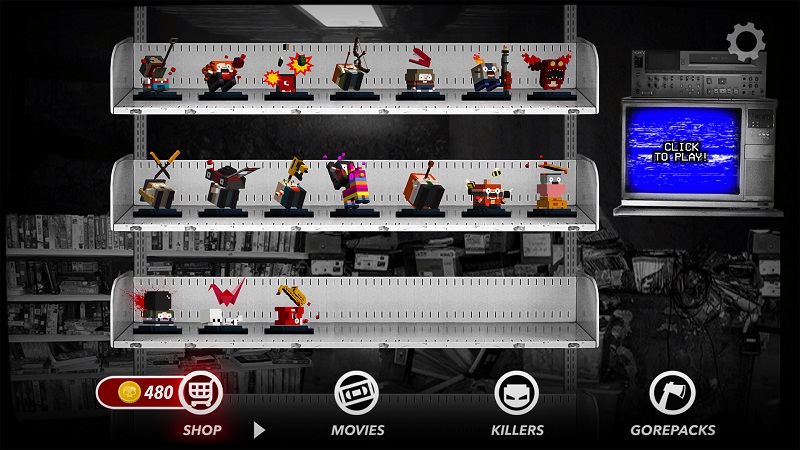 Each scene finished and mini-game completed will earn you coins, which can be spent to unlock new types of finishing kills and masked killers. If you get bored with the levels or just want to stock up on coins, you can play Faces of Killed 3, which is just non-stop mini-game kills. They get harder the more you rack up, with the red kill zone sweet spot getting smaller and smaller and the icon going faster. But it’s an easy to way to earn more money to play as fun new characters.

It’s a lot easier if you appreciate the style, of course. Although there are a lot of different horror sub-genres represented in Slayaway Camp, the Friday the 13th films are the obvious influence. Each new set of levels is tied to a VHS tape themed after a new in-game movie, all accessible and unlocked via a video store. Remember those, kids? Each tape features a new location and killer — from an upset teacher at a school to a deranged clown at an amusement park. This all culminates in Slayaway Camp X: Space Camp, the final and silliest future-themed chapter a la Jason X. There’s even an incredibly catchy and cheesy 80s theme song to tie these films together!

Right now, Slayaway Camp is still being worked on post-launch, with some remaining bugs being ironed out and DLC in the works. And while the game is currently available on PC, Mac and Linux via Steam, this game was clearly made for mobile devices. Using the arrow keys to slide your character around the level works fine, but it’s obvious that this is meant for swiping. The touch-centric UI makes it very apparently as well. In a mobile format this game could (ahem) KILL, and regardless of platform it’s infinitely expandable. All sorts of famous horror villains and movies could be added in future updates, and if developer Blue Wizard Digital is not seeking official tie-ins (the way Hipster Whale did with Disney Crossy Road), they’re missing out on some cheddar. 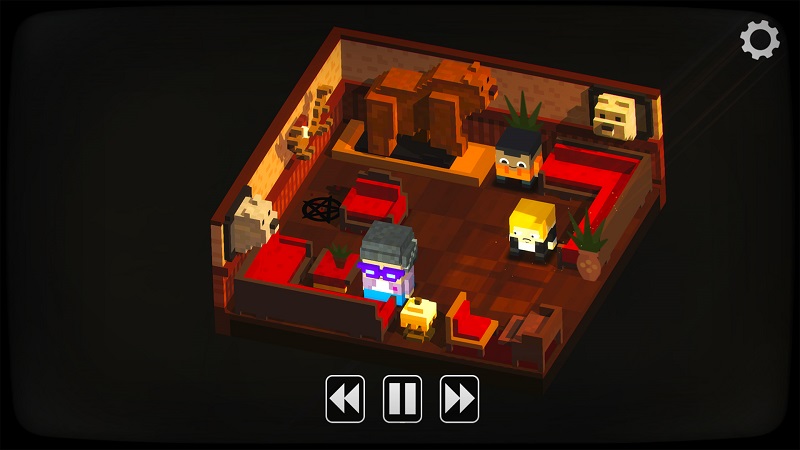 If you want a clever puzzle game with hundreds of levels to complete, and you’re a horror fan? Well, you’ve met your match in hell. One might even say Slayaway Camp is as addictive as woodland fornication. So pick it up either now or when it hits mobile devices sometime in the future.