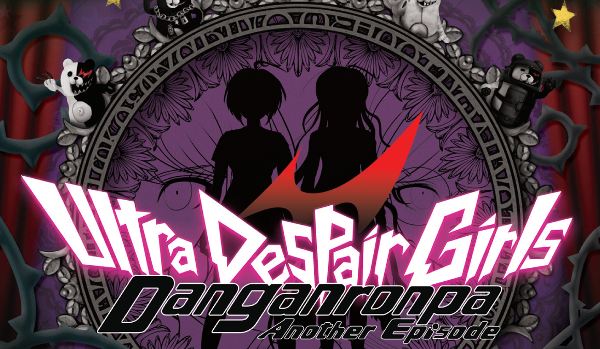 Spinoff games can be a tricky beast to tame, especially when they’re spun off of series as fundamentally simple as Spike-Chunsoft’s Danganronpa franchise of visual novels that’ve been making a splash in the West in recent years. It’s no secret that we love Danganronpa here at Rely on Horror (the second game even achieved a perfect 10/10 score from us and was my personal game of the year for 2014), but nevertheless I approached the latest entry, Danganronpa Another Episode: Ultra Despair Girls with trepidation, as it was such a departure from what made the series so amazingly memorable to begin with. I’m happy to report that my fears were almost entirely unfounded, as Ultra Despair Girls is not only a great new venture for the franchise, but also a fantastic game in its own right. 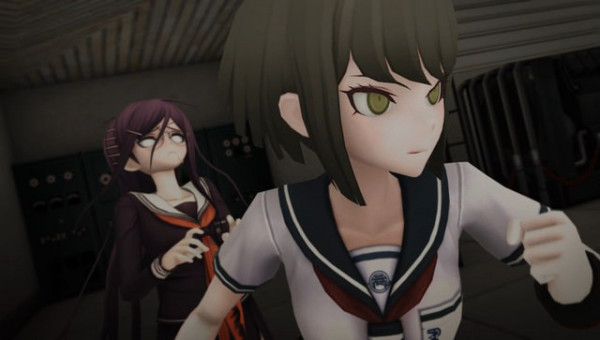 UDG takes place between the first and second game (making discussing it without giving away many of DR1′s endgame twists VERY difficult) and follows would-be schoolgirl Komaru Naegi (younger sister of Danganronpa protagonist Makoto Naegi) as she attempts to flee from Towa City, a former technological paradise currently swarming with soulless (yet equally sadistic) robot duplicates of series mascot Monokuma. Aiding her is another familiar face: Toko Fukawa, the Ultimate Writing Prodigy and one of the few survivors of Monokuma’s murderous machinations in the original game. The duo must utilize a hacking gun given to Komaru by Future Foundation (a benevolent organization first mentioned in the second game) as well as Toko’s serial killing alter-ego, Genocide Jack (who she thankfully has on a tighter leash than before) to smash through hordes of bloodthirsty bears and traps left for them by the villainous Warriors of Hope (a quintet of monstrous yet memorable children responsible for ransacking Towa City in the name of their youth-obsessed utopia) in the hopes of uncovering answers to mysteries that have been plaguing the series from the start and ultimately escape from the city. 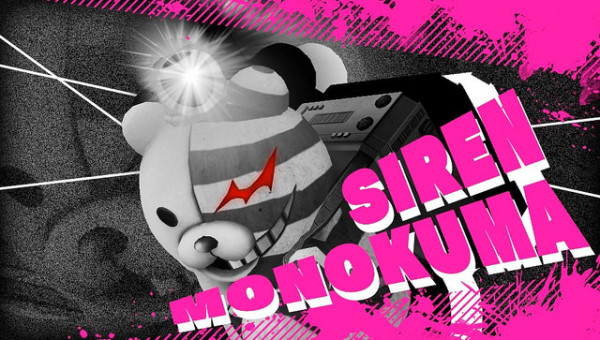 The game plays fast and loose with its allusions and easter eggs to the original game (even throwing in some characters related to the first game’s cast as brief cameos) but those playing in the hopes of getting another taste of DR2‘s universe and characters are sure to be disappointed, as with one or two exceptions UDG‘s references to the tropical adventure are rather shallow and insubstantial when compared to its fixation on Trigger Happy Havoc‘s lore.

One thing that will be immediately noticeable to longtime fans of the series is the shift away from a large ensemble cast and onto a more focused narrative centered on dramatic character development and gradual progression. The supporting cast is a revolving door of colourful but somewhat-flat characters who are ferried in and out of the story in accordance to their relevance to whatever plight Komaru and Toko might be facing at the time, with some getting barely five minutes of screentime before being unceremoniously stuffed into the fridge. If this sounds like an entirely bad thing, then don’t worry; it’s not. While the absence of a strong supporting cast is a definite departure from the franchise norm, it allows the relationship between Komaru and Toko (which is the story’s emotional core and the real meat of the game’s dialogue segments) to really shine.

The dynamic between the naive-yet-pessimistic Komaru and the newly headstrong but snarky as ever Toko (who seems to have taken a few cues from her beloved Byakuya since the events of the first game) is equal parts hilarious, tragic, invested and heartwarming. Their relationship can best be described as symbiotic, as both learn from each other and develop naturally over the course of the game, culminating in one of the best “TEAMWORK” moments I’ve seen in recent memories. While I occasionally found myself missing the wacky antics of the casts of 15+ the series has acclimated me to, keeping the focus on the co-protagonists for the entirety of the game ultimately paid off in a very satisfactory way. 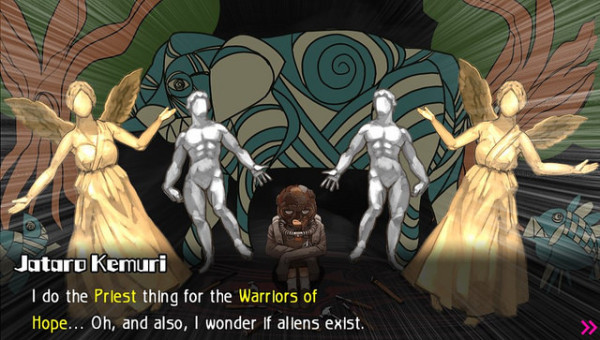 Great heroes are nothing without great villains to test their resolve though, and fortunately Ultra Despair Girls has a rather solid cabal of baddies. The Warriors of Hope get a great deal of screentime to themselves over the course of the game, and while not as immortally entertaining as good ol’ Monokuma, they definitely leave a strong impression with their varied and interesting personalities. Ultra Despair Girls includes many, many collectibles goodies scattered amidst its gameplay segments, and I would definitely recommend locating as many of them as you can as several add to the Warriors of Hope’s backstories in a big way and help transform them from amusing yet despicable antagonists to tragic figures desperately in need of a hug.

Unfortunately the otherwise-sharp writing seriously drops the ball in a few regards, most egregiously being its handling of the very sensitive subject of sexual assault. The game treats other taboo subjects like child abuse, moral corruption and of course gleeful murder with the appropriate amount of gravity and sensitivity, which makes its bungling of this one particular atrocity confusing and frustrating. Fortunately the scenes involving this potentially-triggering concept are for the most part non-essential to the plot, and since UDG is the first game in the series to feature a “skip scene” option, those like me who take issue with how the subject was portrayed can safely vault past these segments without looking back. Still, the suspect chapter is a blemish on an otherwise-engaging story, which is unfortunate considering the series’ high pedigree. 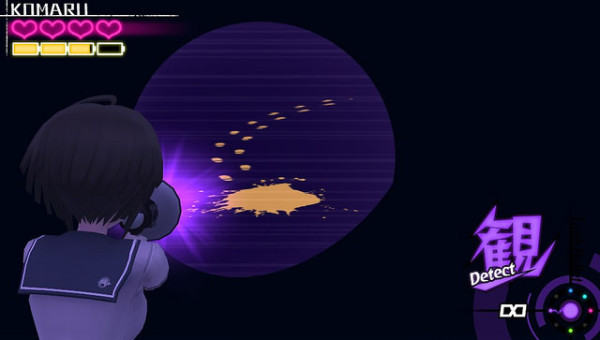 When it comes to the gameplay of UDG, players are in for a very pleasant surprise. I had my grievances about a primarily-story-driven series being spun off into a third-person action game, especially since the gameplay segments of the first two entries were by far their weakest components. Fortunately, the creators seem to have learned from their mistakes as UDG features the most enjoyable “game” segments in the franchise which is definitely something to be praised considering how disastrously frustrating the game would be if its interactive elements were on the same level as DR1 and 2. When you’re not blasting one of the many mechanically unique enemies with a veritable rainbow of context-sensitive Truth Bullets fired from Komaru’s hacking gun, you’re solving a series of increasingly-difficult puzzles and riddles that make great use of the game’s mechanics while deftly sidestepping the obtuseness that video game puzzles often suffer from. While both the action and puzzle segments of UDG are somewhat easy even on the game’s highest difficulty, players who only wish to engage in the story have access to Genocide Mode, which gives them permanent control of the invulnerable Genocide Jack and completely trivializes all but the trickiest lategame puzzles. 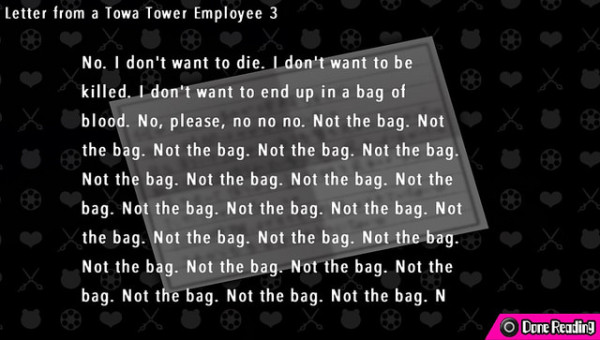 From a technical standpoint, UDG stands head and shoulders above the other games in the series. Utilizing a gorgeous blend of 3D models and hand-drawn 2D portrait sprites (with the occasional 2D cutout-style cutscene most commonly used in the prior games’ executions thrown into the mix), UDG is certainly among the best-looking Vita games out there and makes me very excited to see a third main game with its level of visual flair. The soundtrack’s no slouch either, and I’d argue that it’s series composer Masafumi Takada’s finest work yet (highlights include a pulse-pounding boss theme and an infectiously catchy title screen diddy that will worm its way into your brain and stay with you during your quietest moments for the remainder of your days). UDG’s English voice-acting is top-notch as well, with special mention going to the VAs for the Warriors of Hope who manage to remain convincingly childlike even while delivering chilling lines, but if you’re one of those people who can’t stand English voice tracks in games for some reason the Japanese VO will be available as free DLC once the game releases. 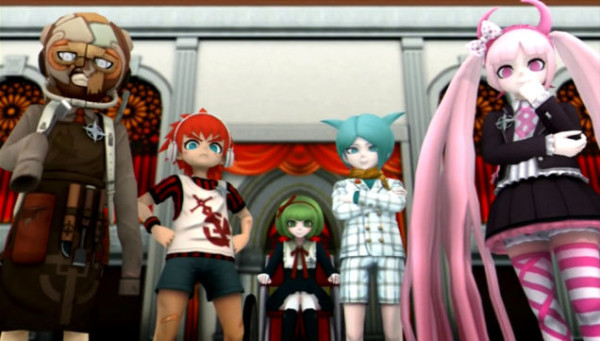 Last year’s Danganronpa 2 is a tough act to follow, and while Danganronpa Another Episode: Ultra Despair Girls has a few niggling issues that prevent it from soaring to the same heights, the rest of the game shines so brightly that it’s impossible not to recommend to Danganronpa superfans and series newbies alike. Now all that’s left to do is wallow in despair until we finally get our first glimpse at the third game. Upupupupu…

Danganronpa Another Episode: Ultra Despair Girls will be available on the 1st of September exclusively on the PlayStation Vita, but be sure to check out Danganronpa: Trigger Happy Havoc and Danganronpa 2: Goodbye Despair in the meantime if you want to get the best possible experience.