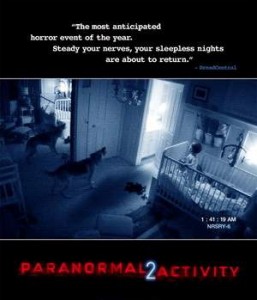 What do you see, girl?

Banking off the success of the original, Paranormal Activity 2 starts with the same calm and happy-go-lucky family feel as the first one did.  The story follows Kristi, sister of Katie from the first film, and her family: husband Dan, his daughter Abby from a previous marriage, and Kristi’s newborn, Hunter.  Paranormal Activity 2 is said to take place two months before the events of the original, which gives a little (and I mean LITTLE) insight into the story of the first film and while it contains tension, suspense and an eerie feel, it just doesn’t deliver the way the first film did and falls short of being what could have been a great horror film.  A few spoilers lie ahead, so read carefully.

While the film holds some suspense, it is in the eye of the beholder to decide what is scary; the Paranormal Activity 2 is riddled with moving doors, mobiles and cabinets with a few falling pots thrown into the mix.  Therein lies the problem: not only is there so little happening in this film – it really doesn’t take off until 30 to 45 minutes in, (which is half the running time, mind you) but the things that do happen are minimal until the ending sequence.  Let it be known that I am absolutely content with waiting for things to happen in horror films if there is enough story to build it up, but the only story in this is that some ancestor of Katie and Kristi’s apparently made a deal with the devil for fortune under the ‘agreement’ that their repayment would be the life of the firstborn son.  There has not been a baby boy in their family line until now – enter demonic spirits.

It would not be so bothersome if the ‘story’ was more than a fleeting sentence in one scene of the movie because other than that there is no mention of it, thus we are left with little happening for a majority of the film.  A few random overnight sequences are thrown in, many of which offer nothing to the story.  PA2 also plays on the thoughts the media has ingrained in our minds, what with the use of Ouija boards and the possibility of summoning spirits with one -as Abby and her boyfriend attempt at one point.  At best the story in this film tries to fill the unexplained events in the first one, but falls short in offering any real substance to either film other than suggesting that these two girls are the unfortunate recipients of some crazy shit. 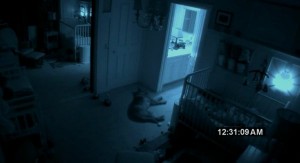 The ending in the second film is virtually the same as the first with a few added scenes which expand on what happens after Micah is killed, which brings us to another point: the deaths in this movie are so ridiculous that they even remind me  of the movie “True Lies” in terms of un-believability. Everything also seems to happen off-screen until the end, which makes for a cheap way out of showing us what could have been a cool effect or two.

All of these things make for a short and ultimately scare-free endeavor, at least for me.  The first film felt a little more interesting with some creepy parts and both films would scare the pants off your children without breaking a sweat, but both films are just full of cheap scares -bangs, closing doors and the like- that may capitalize on the sensitivity of the common viewer, but should never be classified as even decent horror films in the long-run.   That being said, if falling pots and moving pool cleaners scare the crap out of you, do not watch this film.

…and yes I know un-believability is not a word…