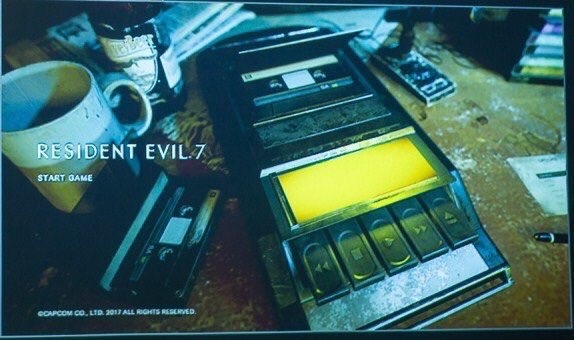 I just love waking up to Resident Evil 7 news!

Both Eurogamer and Spanish magazine Hobby Consolas got to sit down with Capcom and delve into Resident Evil VII: Biohazard‘s first five hours, and published a ton of new information, gameplay, and screen shots to get our blood pumping! To be perfectly honest, this is some of the most… well, informative information we’ve gotten about RE7 in a while. Capcom’s marketing has been very cryptic, focusing on mood and atmosphere rather than actual story and gameplay details. The game is less than two months away now, and we’ve only just recently seen one of the game’s other enemies other than Jack Baker. That’s how close to the chest Capcom’s playing it with this one. In contrast, Resident Evil 6 had already had a dozen or more story trailers by this point before release, and we had seen the grand majority of the game’s basic enemies and had even played the opening 20 minutes of three of the game’s campaigns across two demos.

Just in case anyone reading is hoping to avoid any major, or minor, spoilers, I’ll separate the news into gameplay and story details. There isn’t anything I’d consider to be major spoilers, but there is a small amount of new story information that we hadn’t heard before, so read at your discretion.

What do these coins do? 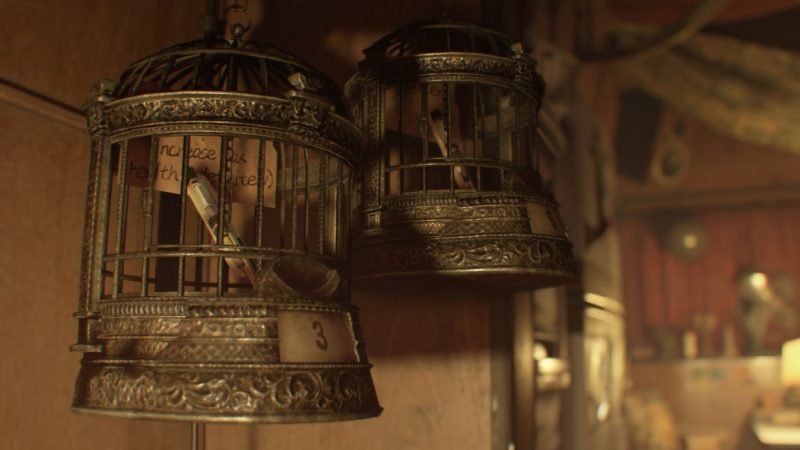 Previously, I’d speculated that the coins teased in RE7‘s Ambassador images might be a return of Outbreak‘s Luck Coin item, it turns out we actually use them to unlock special bird cages hidden throughout the game that are filled with items, weapons, and upgrades. I can only assume these upgrades are actual, physical add-ons rather than minor stat increases as well, the same way it worked in RE2 and 3.

Interestingly, this seems to be a concept borrowed from The Evil Within, RE‘s creator’s suedo-RE game he made with Bethesda in 2014. In that game, we could find keys hidden inside small white statues. We then used them to unlock lockers in the safe area that had items and Green Gel inside. 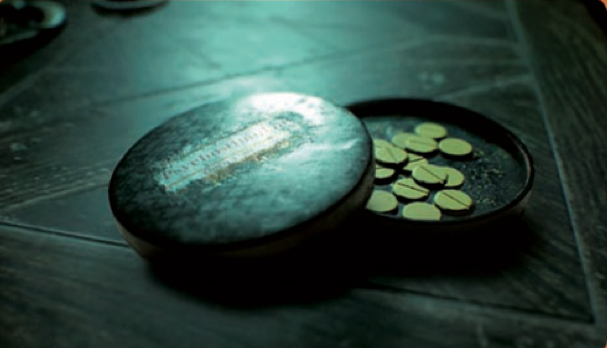 One of the items we’ve seen from RE7‘s preorder bonuses was a collection of pills in a tin. We finally know what they do now, as Consolas confirms they’re called Psychostimulants. These pills are essentially a way of helping out gamers who get lost, as taking them will put a highlighted glow around items nearby. The effects don’t last long, and the pills are of course 100% optional for hard-core players. 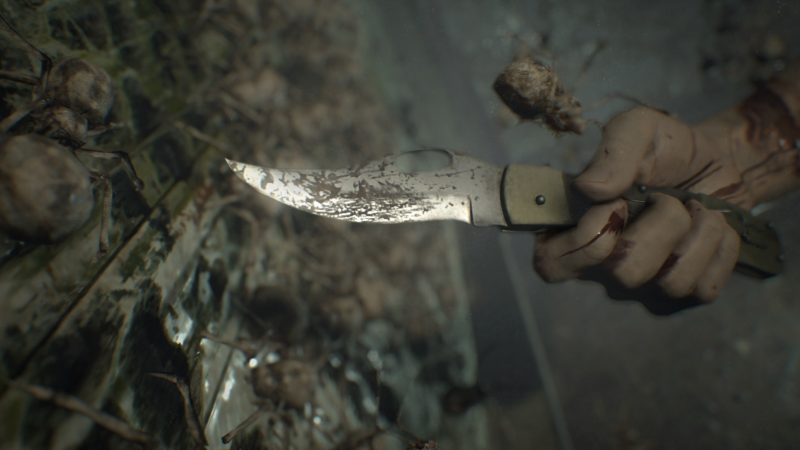 Yet another “tip” from YouTuber AvidExpert has turned out to be true, as Hobby Consolas confirms that the folding knife will be the first weapon we get our hands on in the game. Interesting, in the image they use to talk about the knife, you can also see tons of ants, and Consolas points them out as well, saying that they will “have a large presence during a certain part of the game.” The first thing that comes to my mind is Alexia Ashford…

We’ve seen a white car appear in lots of RE7‘s marketing, from both the Desolation and Bakers trailer to screenshots as well. Consolas confirms that this vehicle is not only driveable but that we’ll be using it during a boss fight. 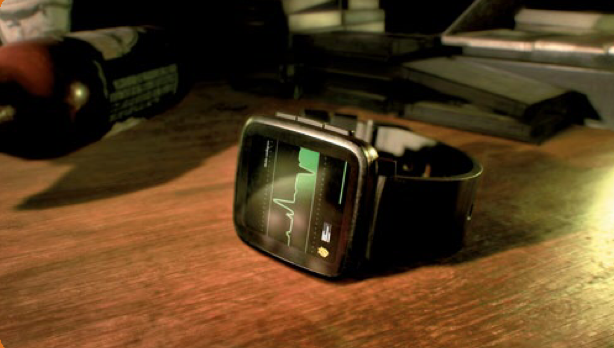 Consolas confirms that saving is almost 100% manual, using the tape recorders we’ve seen. There will be some minor checkpoint saving as well, before and after boss fights. We can also breathe a sigh of relief when we get to a place we can save, for just like in the old days, these are safe rooms, and enemies cannot follow us in. 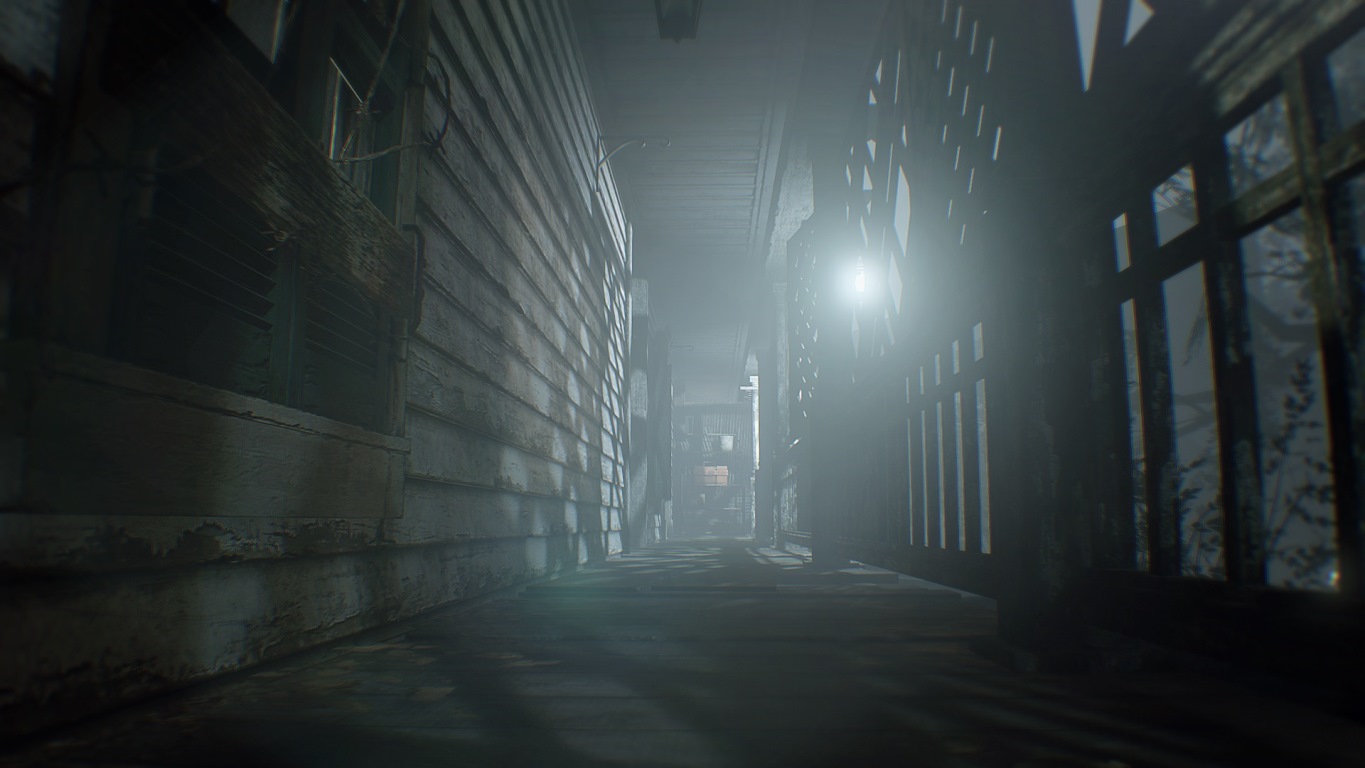 Locked doors are all over the Baker mansion, and beyond. Both Consolas and Eurogamer confirm that not only will there be tons of locked doors that we need both keys and puzzle pieces to unlock, but that the Baker Mansion is not the only location we’ll be exploring. Outside of the main mansion, there are also exterior areas, an older farm house, a greenhouse, a camper, and more. So, essentially like the Spencer Mansion in the original game, where we could also leave and explore a dormitory, two underground labs, a cave system, and even more in REmake. We should fully expect a labyrinthine environment with backtracking and tons of puzzles to solve, just like the old days.

Consolas goes into some detail regarding RE7‘s collectibles, noting that during their time playing they found 32 notes with important information, 18 coins, and 20 figurines called Mr. Everywhere that we have to shoot at. We can actually see these figurines in the mini-trailer, Recorder. They’re little bobble heads. 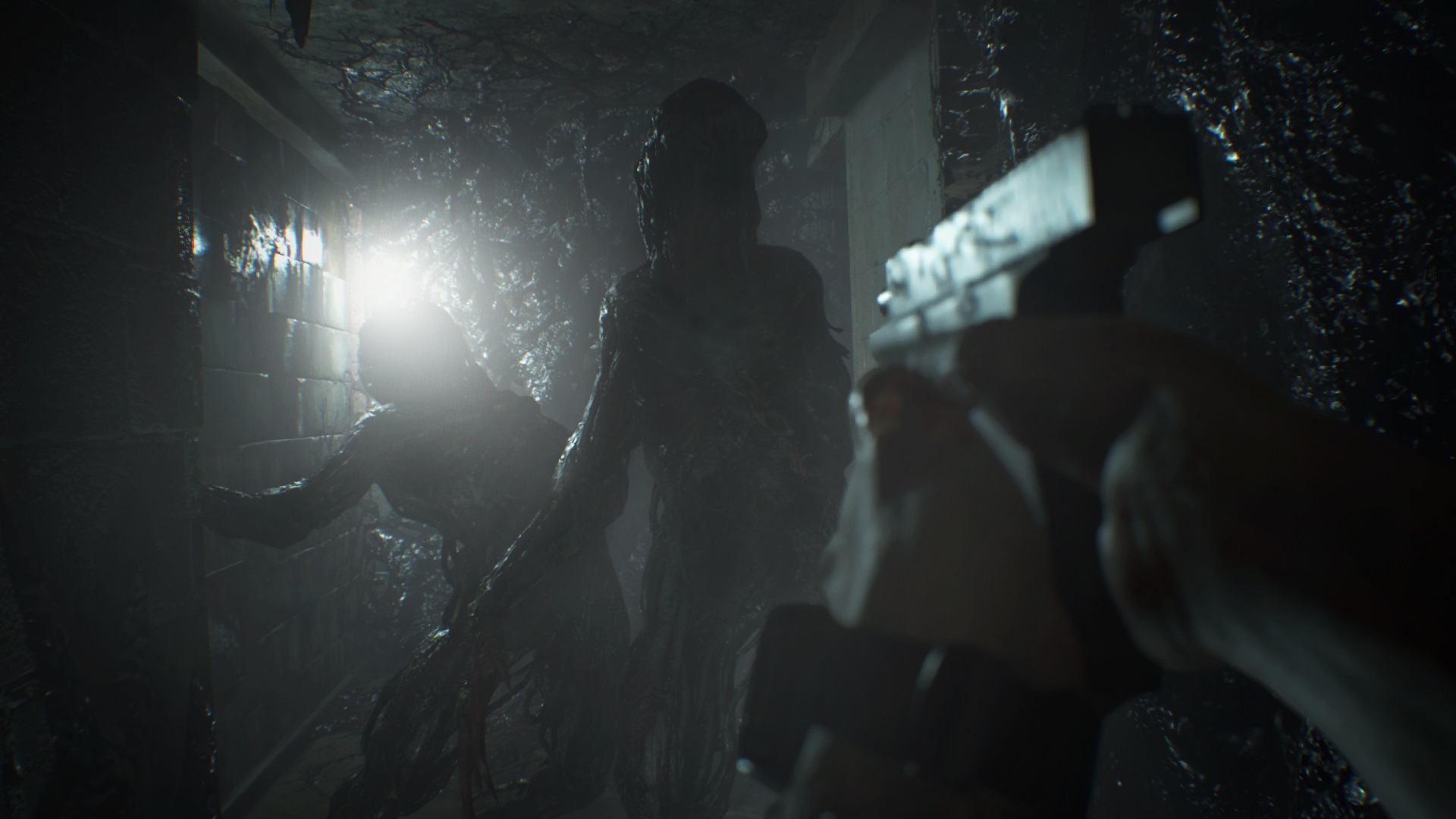 The only other creature we’ve seen other than Jack Baker, are these things are most reminiscent of RE4‘s Regenerators. Called Holograms by Hobby Consolas, and Molded Creatures by Eurogamer, we’ll not only be fighting more than one at a time, but we apparently have to dismember them a la Dead Space‘s Necromorphs. Unlike Necromorphs, however, we won’t be using guns to hack off limbs (Consolas says they’re almost useless), but the chainsaw weapon, as well as grenades and the flamethrower. Hot damn. Eurogamer doesn’t go into too much detail about these things’ origins, but they do suggest that they might be past victims of the Bakers and that they may have been experimented on…

This was more or less known from the ESRB leak months ago, but yeah, Ethan and Mia are married, and their last name is Winters. Mia has gone missing, and Ethan has come searching for her. It’s worth noting that Consolas also goes into detail about the Baker family, confirming what Andre says in the Begining Hour demo- that the Bakers themselves have been missing as well.

Connections to the Past

Consolas took special notice of a framed picture they saw during their time with the game, much to the joy of the developers watching them play. The image is of the Arklay mountains, the mountain range that surrounds Raccoon City, and the local of both the original Resident Evil and Resident Evil 0. It remains to be seen how deep this connection is, considering we’ve also seen the Umbrella logo on the side of a helicopter seen in the demo, but I’m going to say that now that we have two connections to the original trilogy? I’m gonna say that it’s more than just an easter egg…

We’ve seen the telephone element pop up a lot in the gameplay we’ve seen so far. Four different calls in the demo, and a whole video dedicated to the ringing phone as well. This is going to be a big part of the game, but to what end, I can’t say. Apparently, when we hear a phone ringing, we should try our best to rush back to where the phone is to answer it before our mystery caller hangs up. Resident Evil’s French YouTube channel uploaded a few snippets of these calls, and they’re very… interesting.

The first call sounds like the same voice from the demo, saying “You did good, Ethan!”, the second sounds like the woman from the first World of RE video that said “You really shouldn’t have come here” says “Did my daddy give you a hard time?”. 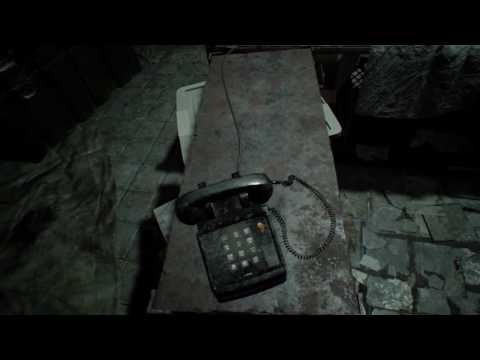 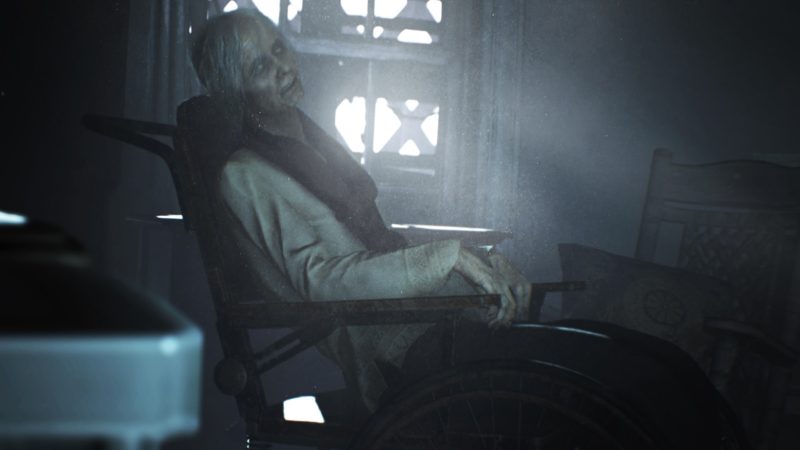 The old woman we’ve seen humming Go Tell Aunt Rhody and popping up in several other trailers for RE7, will be one of the games more haunting jumpscares. Avid Expert calls her Camille, although we still don’t have confirmation of that, and this woman will appear and disappear when we’re not looking. Feeling safe and alone while exploring a room, only to turn around and see her there, watching us, sounds like a great use of a quiet, non-screamy jumpscare. More of a gasp than a yelp. We should also keep our eyes open for a little girl, who’s role in the game is still completely unknown…

Both Eurogamer and Hobby Consolas released about 8 minutes of new gameplay footage, from what’s probably a very early area in the game, expanding on their thoughts from when they played. Shockingly, almost all of the areas we’ve seen thus far (the dinner table, the save room, the garage, the police officer with the flashlight, Baker busting through the wall, etc.) are all right next to each other. We’ve only seen footage from one or two areas of the game before now.

We also get a look at a few entirely new areas, including a sort of… arena that it looks like we’ll be facing off with Jack Baker under boss fight type circumstances. There’s also a better look at the large room with the staircases, showing that there will be more than one of those shadow puzzles from the Lantern trailer. Check it out for yourself. I’ve also included a commentary-less version of the gameplay from AvidExpert, incase you just want to be immersed. 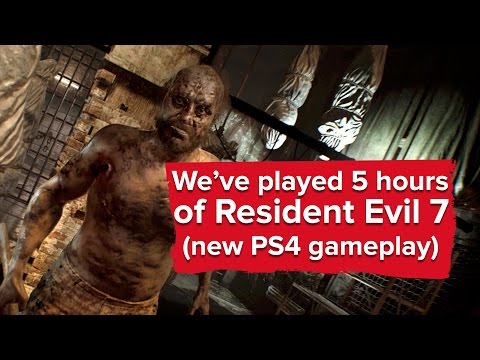 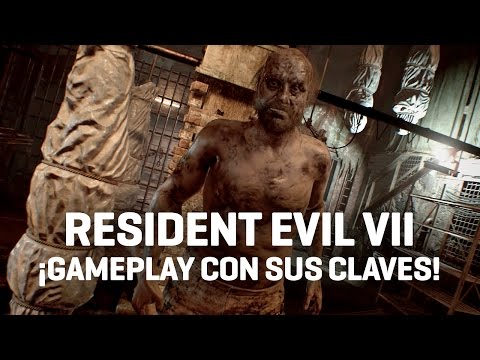 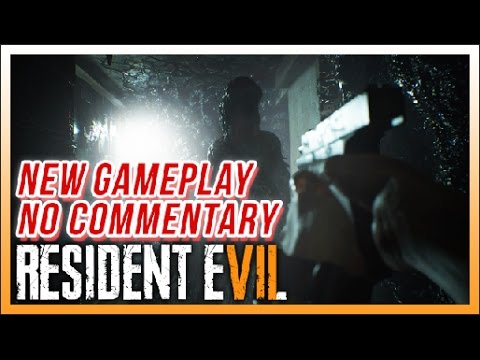 So, yeah. That’s all for today, *woo*. More RE7 news will be incoming this weekend as well, as we’re probably getting both Tape 3: Resident Evil and the final demo update this Saturday/Sunday from PSX. We’ll keep you updated!

To read scans of the full Hobby Consolas article, check out Reddit, where they’re also working on translating the whole thing.