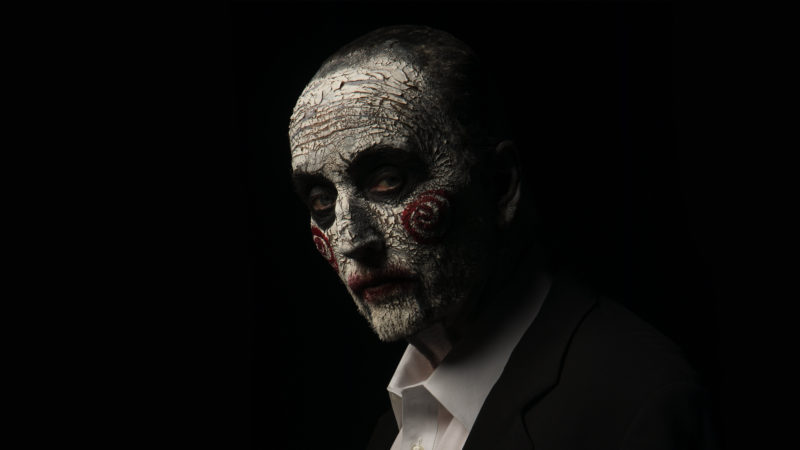 Dead By Daylight, despite its flaws, has fast become one of my favorite multiplayer games on Xbox. This is mostly due to its ever increasingly large catalog of licensed killers, pulled from famous slasher movies. It’s been an absolute joy to stalk, maim, and kill as some of my favorite horror icons, Micheal Myers, Leatherface, and most recently Freddy Krueger, all with lore-accurate attacks and special abilities. I’d been eagerly waiting to hear who would be next, as the developers seem to be able to get characters from multiple competing franchises with (at least apparent) ease. To my total surprise and delight, next on the list is… Jigsaw.

Announced today via a brief teaser video on their YouTube channel, the Saw franchise’s famous killer-who’s-never-killed will be joining the ranks of Dead by Daylight‘s already sizable roster. There’s… not a whole lot to the video, (teaser really is the best way to put it), but it whets my appetite somethin’ fierce. If anything, I’m desperate for information on the hows, whats, and whos of this addition. Yeah, worth remembering that while Jigsaw is most closely associated with Tobin Bell’s John Kramer (a cancer patient with a twisted morality that leads him to “test” victims in a variety of cruel and vicious traps), no less than four others have either closely assisted him or even taken on the mantle of Jigsaw throughout the eight existing films. There’s of course always the chance that the killer might simply be represented by the generic “pig-mask” seen in the films… but I’d personally find that a little lame.

It’s also making me wonder how exactly they’ll play. Jigsaw is perhaps best known for their creative “traps”, but the game already has a trap based killer. This didn’t stop them from bringing in Leatherface, despite already having a clear Leatherface stand in with the HillBilly killer. If I could venture a hope (note: this is my own theory, and not in any way confirmation of anything), I think the best way to handle Jigsaw would be to, like how Freddy, Micheal, and Leatherface all play with the way they work in the films in mind – design him around the Saw film’s most famous staple. The twist.

Given that the survivor players have no way of knowing which killer they’re playing against until they literally run into them in a match, have the Jigsaw killer simply looks like a regular survivor, any one of the generic survivors, randomly spawning. Give them the ability to rig traps on generators or other interactive elements of the world, and work against the actual survivors without them realizing it. If a player figures out who’s the Jigsaw killer (as in catches them in the act, or the killer “downs” them and comes to finish the job on a sacrificial hook) play the famous Hello Zepp theme. Game over, indeed. It’d even play into the most recent film, Jigsaw’s, marketing campaign: He is everywhere, he is everyone.

Either way, Jigsaw is coming to Dead By Daylight sometime this year. We here at Rely (or at least just me, CJ needs to shush) are eagerly awaiting the DLC. Oh, and this probably means Konami doesn’t have the rights to make Saw games anymore, which is genuinely the best news I can imagine.