Preview: Among the Sleep 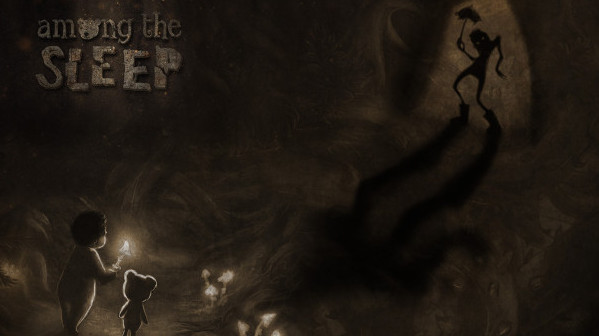 When I was very young, after everyone else in my house had gone to sleep, I would wake up and wander into our family room.  Fully awake for some god-awful reason, I would play in the dark with my dog, Pepper.  We would explore behind the television and under the living room table.  My parents would yell at me to go back to bed, which I would, when I was caught.  But night after night, I would still venture out into the darkness with my faithful companion at my side. I kind of wish I could remember what the hell I was doing, but I loved it!  At night, everything was so much cooler, but scarier!  That’s why Pepper was there.

The public alpha build for Among the Sleep became available yesterday, and sitting down to play through it, I immediately got a strong nostalgic feeling for my nights of exploring the crevasses of my old living room.  The alpha build is pretty short, not lasting more than a half an hour, but it leaves me feeling confident that Krillbite has a good thing here.  Now that Among the Sleep has met their Kickstarter funding goal, I can say that I’m really looking forward to the final product. 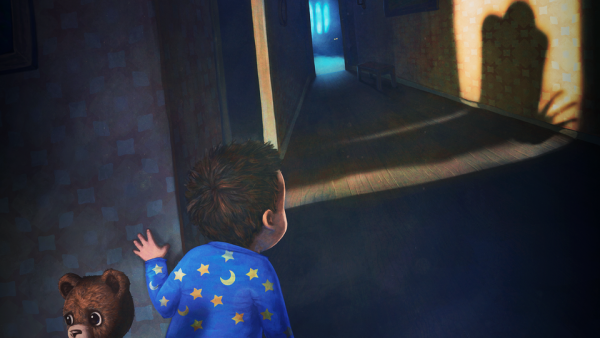 For the unfamiliar, Among the Sleep puts you in the little onesie of a toddler at bedtime.  The game is seen through the eyes of the toddler, bringing a fresh take on a genre that is, to be honest, starting to become a bit tired of itself.  The game starts you off in your crib, being softly sung to sleep with your mother. The tones and chords she’s using don’t exactly sound like any lullaby I’ve heard, but fit the unnerving feeling of the game well enough. You drift off to sleep, only to be awakened a short time later by your faithful teddy bear being pulled away from you by an invisible, mysterious force. That mysterious force also tips your crib over, knocking you out of it.

What is immediately evident about the world through the eyes of a toddler is that everything is so much bigger and more frightening.  Something as mundane as a dresser in the corner of a room, or a box of toys seems so much more eerie and malevolent, particularly when it is shrouded in darkness, which Among the Sleep has plenty of.  The game is incredibly dark, so much so that I actually had to adjust the brightness settings for recording purposes.  There were a few graphical glitches here and there, which is to be expected in an alpha build.  The game’s graphics look decent enough though.  Nothing that’s going to wow the socks off of you, but good.

Your primary methods of exploration are through walking and crawling, each having their own advantages and disadvantages.  Crawling as fast and gets you under certain obstacles, while walking is slow and unsteady.  There are certain places where you are forced to climb and push platforms such as dresser drawers and chairs as well.

There is not a whole lot of instruction in the alpha build, which is something that I do hope changes, even if just a little.  I happened to stumble upon the first objective purely by accident, which I think is what the developer intended.  That’s nice in its own way, finding things on accident, but could lead to confusing and frustrating gameplay down the road.  The screen is free from HUDS or action-prompts unless you’re right next to an object, which is refreshing to see.

That first objective brings up an interesting feature.  The teddy bear that was ripped away from you in your sleep – it can talk.  Of course it can talk, didn’t you ever talk to your stuffed playthings when you were a child?  They were your best pals, your Peppers, if you will. If you still talk to your stuffed playthings…well, that’s…that’s great, but I’m not going there.

I freed the bear from the tyranny of the washing machine and he instructed me that we had to find my mother.  I’m really hoping that the bear will serve as a bit of an objective relayer, giving you information on where you’re supposed to go next and what you’re supposed to do. Judging from even some of the artwork for the game, the bear will play a pretty integral part in the game.

So, lets get down to the nitty gritty.  You might be asking what would make Among the Sleep such a great potential horror title.  A toddler is afraid of everything, right?  Well, I’m not a toddler, why would I be interested in it?

Among the Sleep has some pretty great environmental designs.  From the alpha build, everything seems like a normal house.  There’s a baby’s bedroom, a laundry room, a kitchen, a living room, even the parents’ bedroom.  But Among the Sleep keeps everything in the dark, giving it a much seedier feel.  Glass breaks, things fall off of tables and counters around you, and thunder crashes loudly outside the house (even though you can clearly see the moon).  The occasional lightning strike lights everything up for a split second before it turns to dark again.

A house-like environment is very limited in terms of what you can do to make things frightening.  Inside a closet, there’s a mirror.  Video games have taught me that if I see a mirror, I should try to go through it, or at least touch it to be taken to a different place and sure enough, I was.  Walking through the mirror transported the little toddler into the basement.  After moving some bricks out of the way, I was then transported to a completely different place. 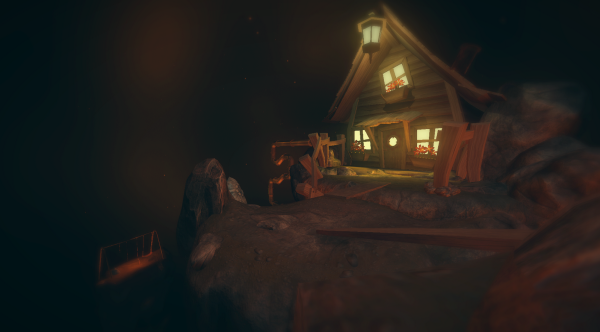 There was very little music in the alpha build, but you could hear the little lullaby that the toddler had been sung before bedtime.  That same, eerie song, creeping along, getting louder at certain points.  That song is going to haunt my dreams.

If you’re looking for something different, Among the Sleep should be on your radar.  It’s not a shooter, as there is no combat in this game.  However, there are enemies, and we’ve been told that they are pretty dangerous.  I didn’t experience any enemy interaction in the alpha build, however.  Just one that shows up to give you a taste of what it’s like.

Among the Sleep has some great potential, and I’m hoping the final product lives up to it.  Have a look at the video of the public alpha above. If you like what you see, you can always head over and play the public alpha for yourself, too.  What do you think?