An interview with the lady in red, Ada Wong

If hardcore Resident Evil fans were to sit down and commence discussion on the series’ female characters, and just who is the greatest, you’ll most likely see a few Ada Wongs sprout. Yeah, Jill Valentine may ultimately take the cake, but Ada Wong is also one of the best female characters put forth by the franchise. It’s something about her mysterious demeanor and the way she’s able to allure us all with her looks that definitely makes her a unique character amongst the rest. She’s a beautiful woman (in red) also serving as a spy. And a good one at that, having even played the ladies’ man Leon S. Kennedy on a couple of occasions, and having aided him in a crucial times, too. Basically, Ada could be seen as the female version of Wesker. She’s a true femme fatale.

So, I’m quite honored to present you all with this interview with the voice behind the lady in red, Sally Cahill. I hope you all enjoy it! A special thanks to Mortal Kombat Online’s Senior Editor, Tony Deklan, who made this possible for us. So make sure to check out Mortal Kombat Online after you read this! 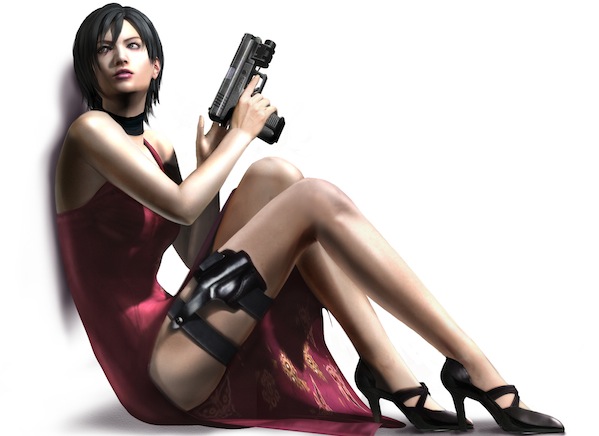 Q: What was the catalyst for you pursuing a career in acting and establishing yourself as an actress?

Wow, that first question is a big one. I have many reasons and inspirations  in my earlier years. One I can tell you is my parents took me to the ballet when I was six or seven. I loved the dancers but there were actors in small roles as mimes in it, too. One actress opened a gift and discovered a beautiful feather boa, then proceeded to saunter about the stage, upstaging  every one else with her antics. On the way home my parents asked me if I was interested in ballet. I said no, I want to be  that actress with the boa!

Q: How did you initially obtain the role of Ada Wong back in Resident Evil 2, was it via a referral or did you audition for the part?

I think I had done some other work for the company. And I remember doing some Japanese dialogue totally in phonetics for the voice over director, so they all knew me a bit. Then I auditioned and got the part. They thought I had a sexy voice. I guess I did!

Q: During the process in the beginning and throughout establishing Ada’s voice, were you allowed to take any creative liberties with the role, in terms of her voice and her general demeanor, etc?

Well, to an extent, but so much of the work is done in the casting to begin with. The sound and edge you bring is taken care of well before you approach the line creatively. Then they are on you then for every line, every inflection. It’s all very important as you only have your voice to convey what they need to get across in the story. In between all that I get a chance to offer what i think Ada should give to the line and sometimes there is a debate back and forth from the mic to the control room..but it’s certainly not all my way! It’s give and take.

Q:  What was your favorite aspect of voicing Ada? Do you also feel anything relatable with her or anything you can identify with?

Oh, I love Ada. I love her resilience, her strength with still being sexy and very female. I like to feel I am that way, too . I find her coolness and intelligence also attractive.

Q: What is it that you think defines Ada as a character and sets her apart from her female peers in the franchise?

To me she is much more of an oddity, and a mystery. Not all is played out. She holds her cards close to her body and only lets you see so much. Now and then bits and pieces of her break through in the dialogue and the read, even the crack in my voice. Some gamers are so adept though, it amazes me how they can gleen on these things!

Q:  What was the decision to not give Ada her ‘real’ voice in Umbrella Chronicles? Was it Capcom’s decision or were you tied up with other commitments?

That question has been asked many times. I’m not sure of the answer, all i know is they did that one totally in L.A with a new V.O director and venue, with actors situated there. It could be money, convenience of local (?). I’m sure they all did a great job.

Q:  How does the voice recording process work? Are you generally in a sound studio alone, or is it also acted out with the other actors to give the dialogue a more authentic finish?

I am often alone. Though I might see another actor in the green room or “waiting room.” But for the most part I am alone . I am watching a tract, with wipes on a screen. I’m usually in the dark with headphones filling my ears with sound effects, watching Ada and trying  to become her. It’s a very unreal experience sometimes.

Q: Have you ever played any of the Resident Evil games? If so, which is your favorite? We are guessing Ada’s Seperate Ways campaign in Resident Evil 4?

Q: We know you cannot divulge any information of upcoming Resident Evil games, but personally how would you rate Ada’s chances of returning in a future game, more importantly re-hiring your voice talent?

Well as I get older my voice lowers, so at some point I don’t know. I’m not sure what direction RE will take now. It’s been a great run and I loved her. Many who have played the game  have told me there will never be another Ada Wong the way I voiced her and created her and that makes me feel terribly thrilled and grateful for the chance to have played her at all. So many new games are being developed but I think Resident Evil will be remembered as one of the most popular.

Q:  Outside of the Resident Evil universe, where may we have seen some of your work and what has been the highlight of your career thus far?

Oh, that’s a hard one. I loved so many things. Much of my work is done in Canada. I just finished a historical thing for the CBC and also a Murdoch Mystery which aired recently, and shot a commercial yesterday. I love working in Prague for the Composers Series, playing  characters in Road to Avonleaea and Wind at my Back for Sullivan Entertainment will always be a highlight. As was the seasons I spent at the Stratford Festival. It seems I’m always in a period piece wearing  a corset. I think that’s one thing I really loved about Ada. She was a totally hip, modern, kick ass femme fatale who could handle weapons awsomely…and no corset!

Well, hope you all enjoyed that! It’s always nice to learn more about the voices behind our favorite characters in the world of survival horror, so I hope you all gained even more love for Ada, and Sally, after having read this. Again, a special thank you to Mortal Kombat Online. Go check them out! And yeah, who would’ve thought a Mortal Kombat-centered site would’ve granted us the ability to publish this, right?!