Review: Dead Rising 2: Off The Record (PS4/Xbox One) - Rely on Horror

Review: Dead Rising 2: Off The Record (PS4/Xbox One) 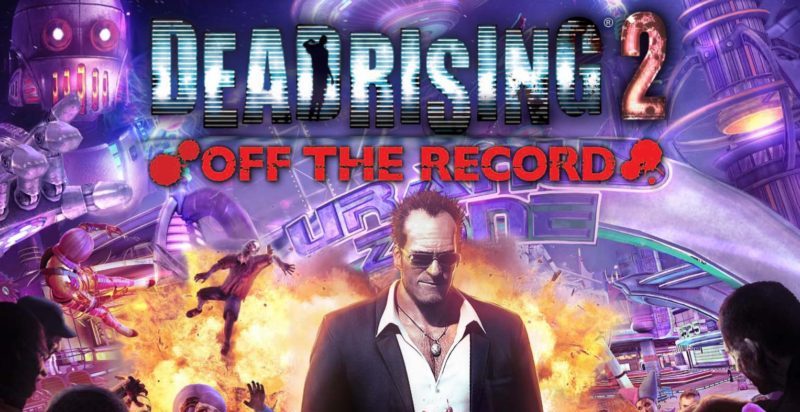 Ah, I’ve been looking forward to this. While the original Dead Rising is still my favorite of all of them, Off The Record, the remixed version of Dead Rising 2, is easily my second. I’d been hoping for the chance to play these games again on my new consoles, and Capcom delivered. While CJ is tackling the original, and Jorge is sinking his teeth into its sequel, I’m more than happy to spend some time with DR2‘s improved sister game, Off The Record.

First things first, we have to talk about what’s changed. 60FPS is probably the most noticeable difference, and it’s a very welcome one (although that comes with a caveat that we’ll get into in a bit) The visuals themselves look more or less the same, although a texture here and there is slightly better. Similar to Resident Evil 5 and 6‘s re-releases, this is simply the original game running at maximum specs, which is fine by me. Actually, remastering such a massive game would be an unspeakable amount of work, so I’m fine with this minor (but very welcome) upgrade.

What I’m not fine with are this release’s bugs. I’m very familiar with the original Off The Record, and I even put a little time in playing each version back to back just to make sure I wasn’t imagining things. Unfortunately, I’m not. Off The Record, on PS4 at least, has almost unacceptably broken audio. I first noticed it with the in-game Muzak system, which plays a few dozen mall/casino tracks throughout the game. Instead of looping pleasantly from one track into the next, each song simply stops abruptly, and occasionally minutes pass before the next track is played. This isn’t exclusive to the music either, many other sounds are cut short and stop abruptly, from item and money pickups to even zombie groans and the sounds of one’s impalement. It ends up making the audio incredibly choppy, and it’s immersion breaking as all hell. 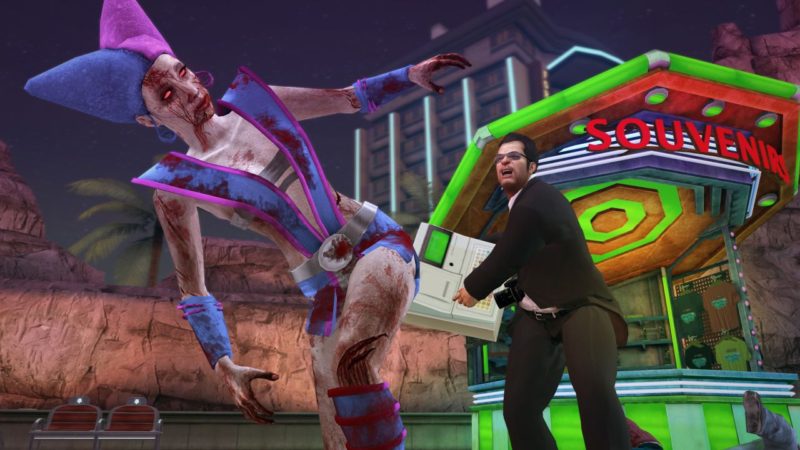 On top of this, for some strange reason every piece of audio that has anything to do with Frank, be it dialogue, grunts, or his actions (like footsteps, attacking, etc.) only to come out of the left audio channel. Plugging in earbuds and leaving the left one out results in Frank simply being muted. Even when the audio is simply coming out of my speakers it’s incredibly disorienting.

Unfortunately, the problems aren’t solely to do with audio, as the game is hardly a consistent 60fps. The framerate dips drastically with even the most basic of actions, and it’s awful. Turning the camera alone will dip the frames down into the low 30s, even 20s. I don’t understand why the game is this unstable. Considering that 60fps would be one of the major draws of this release, it’s a huge blow to the release.

The last and most noticeable bug involves the blood splatter effects, which are a series staple. During gameplay in all of the Dead Rising games, as you chop and hack your way through the living dead, you will become splattered with blood. It’s a cool effect, and the more you kill the gorier you get, to the point where you’re almost red. This can end up looking pretty funny during some cinematics, although the blood will fade away over time. Here, however, the blood is a glitchy mess. Each progressive kill causes the blood to flicker and phase on Frank’s model, with each new splash either removing the previous one, or causing them to clash and strobe like he’s at a disco. It’s awful and boggles my mind how such a simple, not to mention iconic, element got so horrendously messed up. I understand that porting isn’t necessarily easy, but these are all very noticeable issues, and I’m a little stunned this got through any level of testing. Do they break the game or completely ruin the experience? No, but they come pretty dang close. 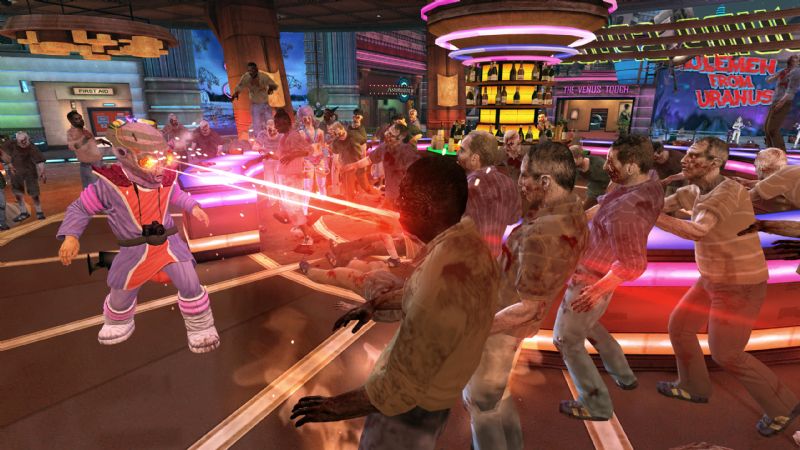 If you don’t already own OTR, or just need a refresher, the game is otherwise unchanged and just fine. The biggest draw of this release is of course, Frank West, who in the original game was an instant legend for gamers. His abrasive personality, his seemingly endless stream of one-liners and his thirst for the truth – it made for one hell of a player character. So it’s easy to see why there was some mild disappointment when the sequel, Dead Rising 2, didn’t feature Frank at all.

Instead, he was replaced by an all-new character, Chuck Greene. Chuck wasn’t terrible or anything, but he was an almost polar opposite of Frank – a very leather and cowboy boots man personality, and his personal plight of trying to keep his daughter safe and clear his own name was very heroic, but didn’t leave quite as much fun wiggle room as Frank’s self-serving douchebaggery did. It’s easier to explain away some of the stuff you can make Frank do than it was with Chuck.

But then developer Blue Castle Games (which was bought by Capcom afterward and turned into Capcom Vancouver) did the unthinkable. What was originally planned as a simple Director’s Cut of Dead Rising 2, with some new content and general re-polishing, was re-imagined into the incredible Off The Record. Completely re-writing the original Dead Rising 2 story and re-arranging bosses, gameplay, and visuals, Off The Record was so much more than any fan could have asked for. The entire game exists in an alternate reality from the main Dead Rising universe, focusing on events that have Frank taking Chuck’s place as the center of attention at Fortune City’s tasteless Terror Is Reality tournament (American Gladiators, but with zombies and meat grinders).

Frank is a very different man than Chuck, and his story almost instantly veers off into new and uncharted territory. That isn’t to say the entire game is different – Frank still ends up being forced into many of Chuck’s same situations, and meets the same people, but the way Frank goes about things is entirely different. It’s actually really cool to see just how differently Frank’s interactions with these characters can get – people that instantly disliked Chuck may not react the same to Frank, and vice-versa. We even get new music tracks, including one of my favorite songs ever, His Name’s Frank, by the same group that performed Gone Guru in the original game (trust me, you know Gone Guru). 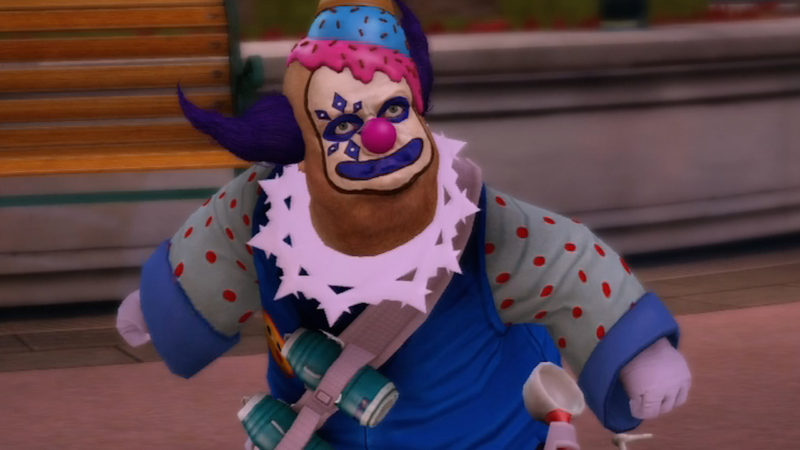 On top of this major story change, there were many other adjustments that drastically improve Off The Record over its predecessors. For instance, checking your watch is now an action that pauses the game, where as before you had to wait and find a safe place before giving it a look (which considering how important time is to this series, is a major thing to change). Answering the radio leaves you hands-free, where as in previous games you were stuck holding onto it and unable to fight until the person giving you tips or instructions was done. The entire color pallet too received some much-needed polish, making the game feels much more vibrant and alive than Dead Rising 2. Bosses and survivors received remixing as well, plus the addition of 3 brand new psychopaths (and all three of them are major surprises for fans of the first two games). The biggest change, however, is the addition of an entirely new area call the Uranus Zone, which comes complete with its own special combo weapons, zombie types, and even a vehicle.

Off The Record is a tremendous game, but as it stands, this release has some serious issues. If they get patched at some point, that would be wonderful, but as it is it’s very hard to recommend upgrading to the current gen version as it is. The game runs, and everything’s all here, but the audio and visual issues are enough to turn me off, and I imagine many others as well. When the main draw of upgrading to a better version of a game is its audio and visuals, these elements shouldn’t be the source of the release’s problem. I’d say just stick with the original copy for now until – assuming it does – this version receives a patch.

A review copy of the game was provided by the publisher for Playstation 4. The game is also available on the Xbox One and PC.