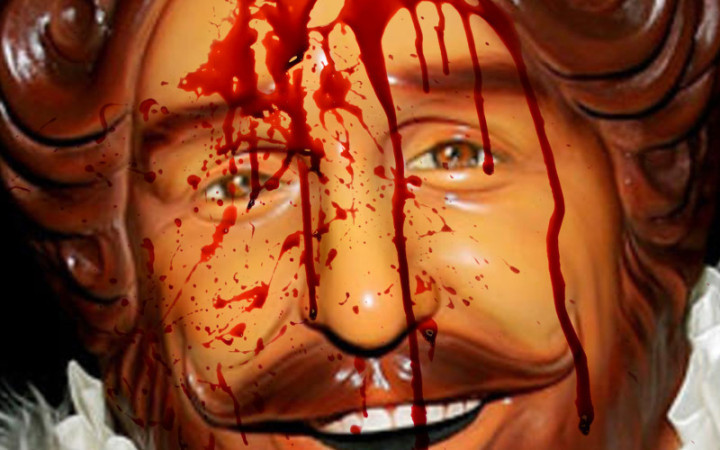 This is a Rely on Horror Video, the script for which can be found below (however, the full experience can only be found in the video).

When Burger King created “The King” in 1955, he was harmless. A mascot for the chain of fast-food burger restaurants who appealed to children, sitting upon his throne of burgers. He served with a smile on his face, and was created for no other reason than to serve burgers to the hungry masses. But as the years past, the character became viewed as “outdated”. In the 1980s, Burger King no longer had a use for the character, and axed his marketing. Broken, The King vanished into legend.  But in 2003, rumors of his return were whispered in dark alleys and behind drive-throughs. He had shed his former image in favor of a grotesque, misshapen caricature of himself. Soulless eyes, a joyless, plastic smile, and tiny hands stained with the meat of so many burgers. He broke away from Burger King Corporation, and began a reign of terror that to this day, has not been forgotten. In the night, saddled with burgers, he would stalk through neighborhoods in search of… something. At the time, no one knew exactly. It wasn’t until the disappearances began. Men and women, some even asleep in their beds, would wake up in horror to his cold, hard, plastic features, and in his hands- a burger. His eyes would stare down at his victims, unmoving in his molded face, and no words spoken. The burger was all that needed to be said. It was not an invitation, or a proposal. It was a demand. A demand of burger.

That is where this game, an anecdotal recounting of The Sneak King’s (as he was to be called by the press after the killings) viscous attacks, begins. By night, he would collect the meat. By day, he would appear, and make an offering of burgers to anyone he would come in contact with. Sneaking up on the unsuspecting, he would appear suddenly and without warning, with a fist-full of burgers. Stricken with fear, the victims would have no choice but to eat the putrid burger, trying to eat around the hair and fingernails embedded into the burgers, while the King gleefully rejoiced upon another burger dolled out to the populace. It was what he was created to do, you see. To give out burgers to those in need. But when Burger King cut him loose, he had nothing to live for. He had no burgers to give out, no happy faces to see. He couldn’t handle it. The burgers must continue.

Sneak King puts you inside this maniac’s mask, and it’s up to you to stalk your prey, to try and put a smile back on the faces of the masses. Once the news was out, The King began to become more aggressive, forcing his brand of burgery horror upon the populous of America. No one knew when he would next strike, from where, or how. Innocent people were forced to accept his grilled murder burgers with smiles on their faces- for if you didn’t accept his offer, you would be the next to be “served”. Due to the horrific nature of The King’s crimes, part of Burger King’s punishment for creating this twisted monster was to give out this game for free, so that anyone and everyone would have easy access to learning the King’s tactics.

To this day, no one knows what became of the King. Some say that he’s still out there, looking for more potential burgers- others, that he’s gotten too old, and is enjoying a quiet life in the suburbs, with a family of burgers. Me, I couldn’t possibly comment. About the burgers.