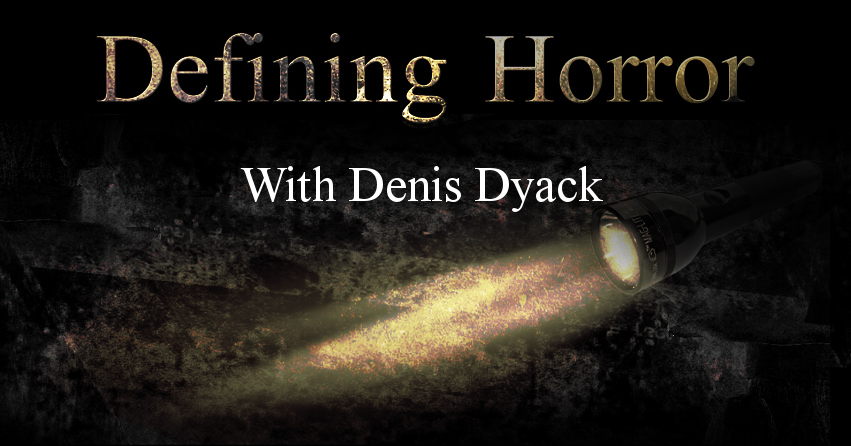 Below you will find Denis Dyack’s definition of horror.

The essentials element for horror would be the following:
1. Create a believable narrative
2. Create rules and stick with them
3. Allow characters to be heroes and not superheroes
4. Build tension with high and lows with spatterings of humor

Creating a believable narrative is the foundation of horror. It has to start with something viewers can empathize with and relate to so that they care can fear for the characters in your story. With Shadow of the Eternals, we start with historically accurate settings and characters so that gamers immediately know and understand that there is some truth to this tale. We then add Lovecraftian fictional horror elements.

Creating rules and sticking with them is the key to making a tight horror. From whatever angle you look at it, your universe still has to be consistent. Lovecraftian style adds an unusual flare to this because Lovecraft horror is based off of science and beings so advanced and ancient that they are beyond our comprehension. With Shadow of the Eternals, we take historically accurate timelines, figures and locations and mix in Lovecraftian fiction with Quantum Physics.

Allow characters to be heroes and not superheroes. It is important that characters in horror are ordinary people placed in extraordinary circumstances. Characters need to be vulnerable, have foibles, fail and often die trying to do the right things allowing them to become heroes. If a character becomes larger than life, then the horror then will slip into the fantasy genre and lose much of the tension and suspension of disbelief. In Shadow of the Eternals, many of the characters are ordinary people, often very much wishing that they weren’t in the situation they are in. None of them are superheroes – notorious maybe, but never superhuman.

Build tension with high and lows with spatterings of humor. Horror shouldn’t always be tense, but have highs and lows to give the viewer a chance to rest. In a sense, I would liken it to a roller-coaster. Humor is also something that really allows you to bring the tension down and is an ingredient that is often overlooked when it comes to creating horror. Making the viewer laugh and then scream is better than just making them laugh. Playing with the minds of gamers with Sanity Events will be one way in which we make the player laugh (even if they ultimately scream) when we break the 4th wall and delete their save games or turn down the volume on the TV set. This break in tension allows for the greatest impact when we truly want to make the game terrifying.