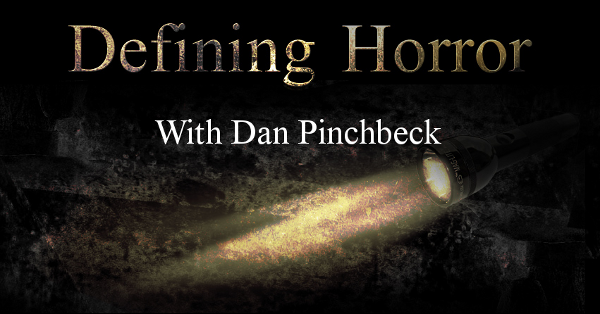 Below you will find Dan Pinchbeck’s definition of horror.

Horror is about the player. Everything else is irrelevant. Historically, horror games got sidetracked quickly into resource management as being a relatively easy way of introducing anxiety into play. But that’s not true, proper horror – that’s tension and anxiety and they are different things. They work alongside horror and fear, sure, but they are different and distinct and that’s important to remember.

True horror is story driven. True horror is about what isn’t represented, it’s about co-opting the player’s own imagination, it’s about the emotional landscape of their immersion in the game. The most frightening moments in games are not mechanic driven, they are driven by atmosphere and the space and time for a player’s imagination to fester and erupt into terrifying new forms. This is what Frictional understood so brilliantly with The Dark Descent. the first hour of that game is not terrifying because of not having any tinder boxes, or some visual FX to suggest you are going a bit nuts. It’s terrifying because of what is missing. And what is missing is a monster. The lack of actual stimulation, this incredibly light gameplay in technical terms creates a fucking nightmare playground for your imagination, because you start creating your own monsters to fill this yawning gulf of stimulus. The best part of Dead Space 2, the return to the Ishimura, works for exactly the same reason. Ghosts and Dead City are the standout sections of Metro 2033 and Last Light. Exactly the same principle. When it all starts going down in a game, you shift emphasis from imagination to solutions. Horror isn’t about solutions, it’s about inaction. When you have a player too terrified to even press a key, to have the game progress, then you’ve absolutely nailed it.

One of my biggest inspirations as a writer is the Hemingway short story: “For sale. Baby’s shoes. Never Worn.” It’s a work of genius, because in six words, he creates a catalyst for imagination in a powerful and deep way. Great horror games work with a similar principle. Just enough gameplay, just enough story, just enough system to engage, then hand over the work of creating terror to the player’s imagination. Never show or tell too much. Never expose the mechanics of the ghost train. Never let them off with a simple explanation. Never think you can outpace the player’s imagination in terms of generating fear.