The original Zombi was first released on the Amstrad in 1986 and was later ported to Amiga, Commodore 64, Windows DOS and other computers. It was a point & click adventure game set in a shopping center overrun with zombies, which I personally thought was pretty decent. Does ZombiU improve on the formula or will it be forgotten just as soon as the original?

Usually I’d begin a review by talking about the story, so that my lovely readers have some context in case they haven’t played the game yet. I almost made an exception on this rule this time around, though, since the story is pretty bland and there is so much more to talk about. It’s set in the English capital of London, which has traded the tourists that usually litter the streets with an even more mindless horde. We see a random survivor wander around the streets until he passes a metro station and is beckoned over by a voice on the intercom. After running away for a few minutes, we learn that this mysterious fellow wants us to go around town and run some errands for him.

Working as a post-apocalyptic UPS employee sounds pretty boring, and it pretty much is; the very first mission has us sneaking into a shopping center, for example (which I admit is a pretty clever reference). We don’t have to clear the place, we don’t have to rescue any survivors, we don’t have to secure an HQ within the mall, all we have to do is perform some maintenance on the security system. Actually, not even that, since all you have to do is aim the scanner at the system and have your Skype pal instantly fix it from a distance. The story also gets needlessly convoluted with necromancy, some ancient prophecy, a royal conspiracy and some factions that I really can’t recall. 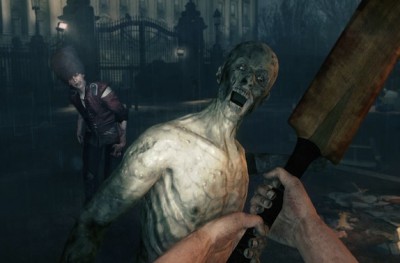 It’s already pretty tough to get into a story that largely features adrenaline-pumping objectives such as: “find a book in the library” or “buy some petrol for this generator”, but the unlikable cast of characters makes it even worse. “The Prepper” (as he refers to himself), is the NPC you interact with the most, but he’s also an obnoxious elitist who doesn’t give a damn about your character’s life. Other folks are not much better and often disappear from the scene for large portions of the game.

The game is played with the WiiU Gamepad’s buttons, which control the action on your main screen in traditional FPS-style. At the same time you use the screen on your controller as a map, radar and backpack all in one. We’ve all seen this stuff in the trailer: you touch the screen and open your backpack, which has your character kneel down to rummage through some bloke’s trousers and steal all his chocolate bars. All that dual-screen stuff does actually work and is fast and responsive enough to not cause any sort of frustration, so if a zombie does decide that he’s in the mood for a British dinner, then that is entirely your fault for not clearing the area properly.

Overall, the controls are reminiscent to the classic Resident Evil games in feeling; slow and difficult, but also gratifying when you finally do kill something. I am rather divided about the melee combat, though, as it’s fittingly unyielding, but also overpowered. The bat, which is your one and only weapon for this kind of combat, has to be readied before a strike, which takes a good second or two. Fighting groups of two is therefore already a challenging job, but if you do find a lone zombie, then using the bat is almost a cheat. It knocks back zombies, sometimes even trips them and after two hits you can instantly finish them off. Since the bat never breaks, it just becomes a cheap way to conserve on the ammunition.

One of the game’s more interesting features is that whenever you die, you restart either the entire game or back at your headquarters (depending on the difficulty level) with a new person. You lose all your items and weapons and in order to get those back, you’ll have to track down the spot where you died and introduce your old self’s face to your new self’s boot. If you’re connected to the internet while playing, then you can also find the undead versions of other players who died while playing. I don’t know who you were or if I’ll ever see you again, “Vampirepope”, but thank you for the landmine I stole off your corpse.

This makes dying kind of fun and gives you a reason to stay connected to the internet, but it also means having your character’s progression reset. The game tries to flirt with RPG-elements, you see? I’d explain how these work, but your guess is as good as mine. When you open your backpack, it’ll show you like 9 freaking tabs and none of them are explained with a brief tutorial or something. The game at one point informed me that I had gone level up, which I associate with been able to invest a point in a skill tree or increasing my statistics. A ten minute venture into the menu didn’t reveal anything, though, so I have no idea what that was all about. “But Casper, why didn’t you swallow your pride and read the manual then” you ask? Well, the manual is just the main controls in different languages, so that won’t get you far.

Levels are also kind of dull and are full of the generic MODERN HD 1080P 100% REALISM kind of graphics, so everything is dark, gray and brown. Even the second level, which was set in friggin’ Buckingham Palace took place largely in colorless corridors. Levels do have a lot of locked doors and paths that need to be opened with items you unlock later in the game, which is a clever way to encourage exploration. I am a bit disappointed that not all the hidden rooms actually have stuff in them, but the few times I did find something, it made me feel like the luckiest person in the world. Besides that, though, levels are just obnoxious labyrinths with way too many stairs and sometimes even doors that trick you into leaving the area

On a more positive note, some of the levels do actually manage to get some good scares in on you or even feature fantastically creepy atmospheres that kept me on edge. These are mostly found in the rare levels that are relatively scripted, which often make the game resemble Bioshock. One of the more memorable sequences is also an unforgiving crucible that comes out of nowhere, which has a very eccentric announcer yelling at you all the time. If the core-game could have just focused on scripted sequences like these, then I would probably have rated the campaign a lot higher, since the actual slow-paced fetch-quests never manage to immerse a player as much as these levels do.

So, this would probably answer the question I asked in the intro, right? The game will likely be forgotten and only remembered for being a launch title, correct? Actually, there are two more standout features that catapult the game towards the score I ended up giving it. First of all the graphics, which are just… wow. This was my first introduction to HDMI and I am honestly impressed with how detailed it is. I especially love the expressions on the zombie’s face when you are grabbed by one and stab it with a syringe needle. I also find a childish joy in beheading zombies or blasting their legs off, so that they crawl around like enthusiastic turtles.

The second feature I absolutely adore is the multiplayer in this game, which has a good chance of becoming the go-to party title for when my family and friends are over. The premise is that one player has a regular controller or Wii-remote and has to capture flags or survive for as long as possible, while the second player uses the Gamepad to spawn zombies. Surviving is all good and well, but the integration of the Gamepad is what really makes it interesting. The user, who gets dubbed the “King of Zombies” by the game, has a little RTS in his hands with different units, map navigation and resource management. You even get experience, which you use to level up and select a new perk or unit to unlock.

There is a lot of tactical depth to this, since the Gamepad user can spawn plenty of grunts to take over multiple points at the same time, set up ambushes with the stationary guards or just spawn many of the disposable regular zombies to level up as fast as possible (as well as plenty of other tactics). The victim of all this doesn’t really level up, but getting a certain amount of kills spawns a special item for him or her to use (landmines, turrets, health-kits and the likes), which is also pretty neat. Another clever feature is that the King of Zombies can only spawn zombies in areas outside of the one the player is in or in the bottlenecks connecting them together. Me and my cousin tried to find exploits for five hours and didn’t find a single one, so the multiplayer is polished very well.

If you plan on getting a WiiU, then ZombiU is most definitely the game I recommend taking along with you. The story is not fantastic and the campaign as a whole leaves a lot to be desired, but finding the zombie of your previous character, as well as those of others is pretty cool and it can serve as a time-sink until your next paycheck comes in. The multiplayer is where the game shines, though, so if you have someone to play the game with, then that is certainly a major selling point. Additionally, if you plan on getting a Commodore 64 anytime soon , then the original Zombi is not half-bad.