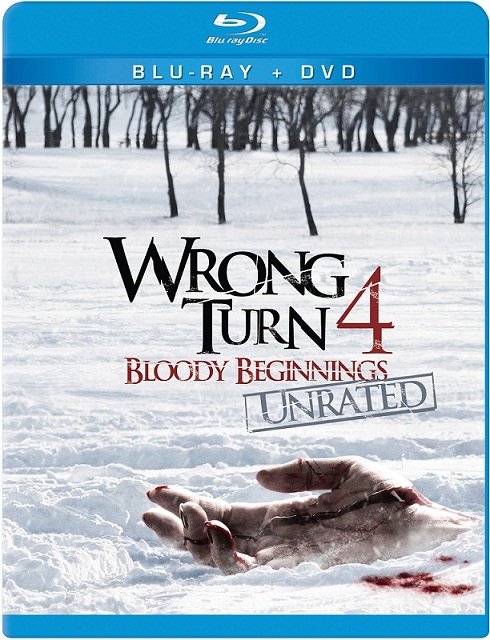 Wrong Turn 4: Bloody Beginnings is the 3rd direct-to-video follow-up in the Wrong Turn franchise. Wrong Turn 3 director Declan O’Brien returns on the director’s chair and also wrote the film. The film is a direct prequel for the 2003 original film.

The film opens in 1974 at “Glenville Sanatorium” where we are treated with a little back story about the original hillbilly cannibals aka the Hiliker brothers (One-Eye, Saw-Tooth and Three-Finger). After a little bit of introduction to our favourite hillbillies, chaos ensues in the sanatorium. The three brothers eventually escape, lets all the maniacs loose and kills most of the staff. The opening scene is ridiculously insane that it felt so funny in an entertaining way. We then cut to present day.

We are then introduced to a snowy setting where we meet a group of college students on snow mobiles to visit a friend’s cabin near the mountains. This is actually the first time for the series take us in a different setting and it actually helped to keep this one fresh and not outdated especially since it is a prequel. Of course, the group got lost as a storm hits the mountains and found a safe haven at Glenville Sanatorium.

In this act, I really appreciated that the film took it time for some character development to get to know the cast as they explore the sanatorium. The group then found some left behind alcohol, some old film reels and had a little party of their own, little did they know, they just became the latest prey for the hungry cannibals.

The film then spends most of its time delivering the goodies, the kills and thrills. Our cast not only has to battle against their pursuers but they also needed to battle with the elements around them as the snow storm gets worse and worse. There is one particular scene that will be very memorable and I would only give you one word to describe it: Fondue. Acting is not the best I’ve seen but it is forgivable since the film did not go for the serious tone. Dialogues are delivered in a tongue and cheek fashion and had a great amount of humour which I really liked. I really enjoyed a huge chunk of this film until the particular scene where our lead protagonist maid some decisions that really pissed me off, you will know what I’m talking about when you see it. I was really disappointed, the energy went from high to really low after this scene. It is sad to see a movie that started so good and intense, then ended up so predictable. 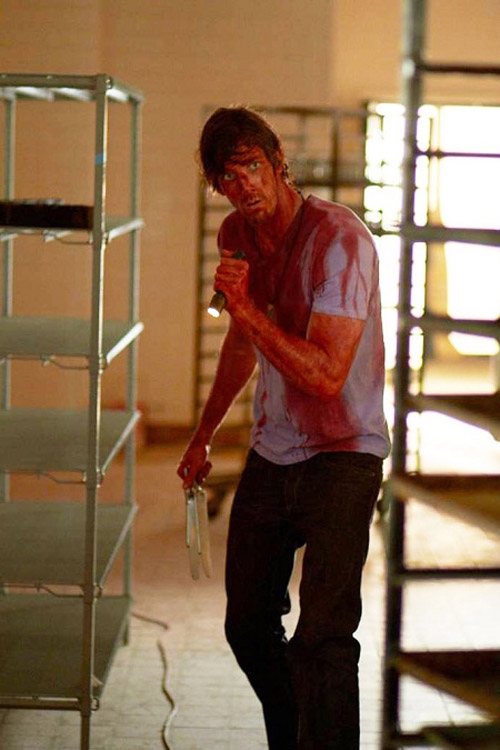 The picture quality of the blu-ray is really enticing to the eyes, everything was crystal clear.  We are treated with some great lighting with a lot of varieties. The score set the tone of the film but could have been better in my opinion but I really liked the songs featured in the film. I just wished there was more content for the special features which includes a commentary with director Declan O’Brien, Director’s Die-aries, Making another Wrong Turn, Lifestyles of the Sick and Infamous and a music video featuring the Black Out City Kids. The Blu-ray version also comes with a bonus DVD version of the film.

Overall, Wrong Turn 4 could’ve delivered a film that is engaging and entertaining but kind of fell flat in the 3rd act, although it is still a better film than Wrong Turn 3. I just feel that this film was such a wasted opportunity to re-invent the franchise but I still enjoyed for what it is. If you are a fan of this sub-genre then you will totally enjoy all the gore and creative kills. The biggest strength of the film is that it is self aware and it doesn’t take itself too seriously. In the end, Wrong Turn 4 is not for everyone, but it is a good candidate for a popcorn movie at night if you are bored, and I would definitely recommend this one to fans of the series.